In an interview on Monday, Warren Buffett left open the possibility of Berkshire Hathaway acquiring an airline. Not surprisingly, airline stocks responded positively.

Buffett would like to redeploy this cash into productive investments. Nevertheless, Berkshire Hathaway made just one significant acquisition last year, as a buoyant stock market and the availability of cheap debt caused companies' asking prices to soar past what Buffett was willing to pay.

However, airline stocks do remain quite cheap. On Monday morning, Buffett created some drama during a CNBC interview by saying, "I wouldn't rule out owning an entire airline." This caused several airline stocks to jump by about 3%. 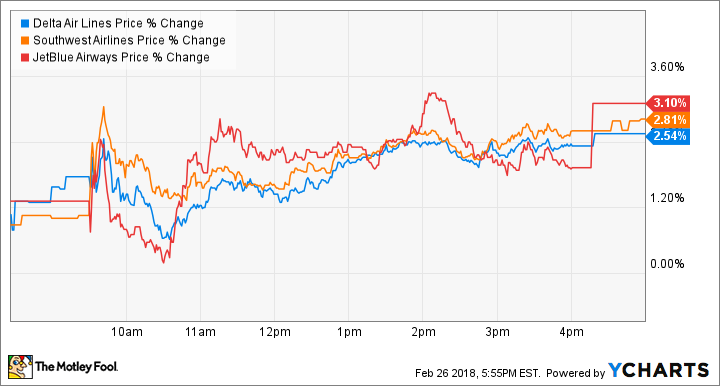 While this hardly sounds like a ringing endorsement, Berkshire Hathaway already owns between 6% and 10% of each of the four largest U.S. airlines. Among those carriers, Delta Air Lines (DAL -0.36%) and Southwest Airlines (LUV -0.92%) would probably appeal the most to Buffett. That said, JetBlue Airways (JBLU -0.34%) could be an even more attractive acquisition target than any of Berkshire Hathaway's portfolio airlines.

Despite the strong profits posted by airlines since 2014, most airline stocks have struggled to move higher in the past three years. As a result, Southwest Airlines trades for just 12 times forward earnings -- and it has one of the higher valuations in the sector.

Shares of American Airlines and United Continental -- the other two airlines that Berkshire Hathaway has invested in -- also trade for around nine times forward earnings. However, both carriers' pre-tax margins plunged into single-digit territory last year and are at risk of falling further in 2018. That could be a deal breaker for Buffett.

None of the top four airlines fits the bill perfectly

In this year's shareholder letter, Buffett provided a helpful summary of what he's looking for in potential acquisitions. These are: "[D]urable competitive strengths; able and high-grade management; good returns on the net tangible assets required to operate the business; opportunities for internal growth at attractive returns; and, finally, a sensible purchase price."

JetBlue may fit all of Warren Buffett's desired criteria for an acquisition. Image source: JetBlue Airways.

Delta and Southwest both have top-notch, long-tenured management teams and produce strong financial returns. They also have wide moats. Delta dominates its four "interior" hubs, and particularly Atlanta, giving it a long-standing margin advantage over the other legacy carriers. Meanwhile, Southwest Airlines' low costs and broad domestic route network have made it the leading airline in nearly half of the top 50 markets in the U.S.

However, Delta Air Lines has rather modest growth prospects. It tends to expand capacity at about the rate of GDP growth. Southwest Airlines has a little more runway for growth, as it currently has very few flights beyond the continental U.S. Even so, 4%-5% annual capacity growth is the most investors can expect for the next decade.

On the flip side, Southwest Airlines may be too pricey for Buffett's taste. Factoring in a buyout premium, Berkshire Hathaway might have to pay around 16 times forward earnings to acquire Southwest. That wouldn't be an unreasonable deal price, but Buffett remains acutely aware of the airline industry's cyclical nature.

JetBlue could be the best deal target

If Buffett decided to take the plunge and buy an airline, JetBlue Airways could be an ideal choice. It's the leading carrier in Boston and the Caribbean, and is becoming a force to be reckoned with in transcontinental markets, thanks to its upscale Mint-branded service. Consequently, its return on invested capital has routinely exceeded 10% in recent years.

As noted earlier, JetBlue stock is slightly cheaper than Southwest Airlines shares. Furthermore, JetBlue has significantly more growth potential, being just a third of Southwest's size. Revenue has increased at a compound annual growth rate of nearly 7% over the past four years, and analysts expect even faster growth for the 2018-2019 period.

In short, JetBlue Airways checks all the boxes for a desirable acquisition, based on Buffett's stated criteria. While Berkshire Hathaway hasn't invested in JetBlue stock thus far, that's probably because the company has a market cap of just $7 billion. Berkshire prefers to limit its ownership stake to 9.9% or less for minority investments, and a $700 million investment would be too small to be meaningful to the conglomerate's performance.

By contrast, JetBlue's modest market cap makes it a more attractive acquisition target. Berkshire Hathaway could probably buy this promising, high-growth airline for $10 billion or less. That seems like a better idea than risking perhaps $50 billion on a megadeal for Delta or Southwest.