The retail earnings season kicked off with a boom Tuesday as strong earnings reports from Macy's (M 4.01%) and Dillard's (DDS -1.90%) drove stocks across the department store sector higher. Macy's and Dillard's surged up 5.4% and 12.5%, respectively, as of 10:44 a.m. EST, and drove up peers like J.C. Penney (JCPN.Q) and Sears Holdings (SHLDQ), which were up as much as 13.6% and 7%, respectively, early in the morning before cooling off later in the session.

J.C. Penney is set to report earnings on Friday, while Sears' results are expected later in March. 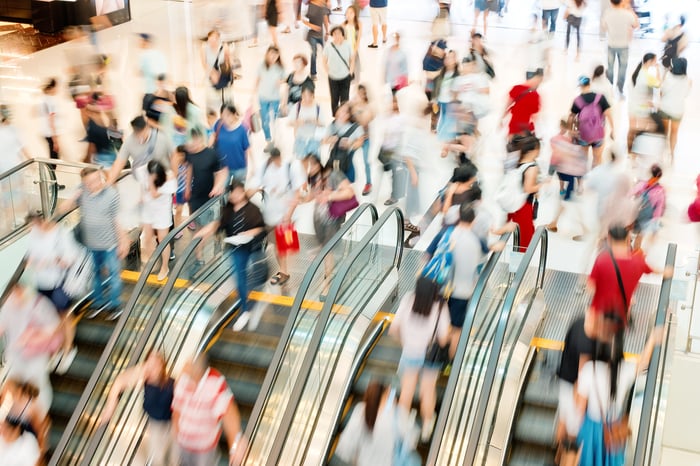 Macy's easily bested analyst estimates in its fourth-quarter report as comparable sales on an owned basis increased 1.3% and were up 1.4% on an owned-plus-licensed basis, compared to expectations of a decline.

Overall revenue increased 1.8% to $8.67 billion as an extra week in the fiscal calendar counteracted the impact of store closures, but that was just below the Thomson Reuters consensus at $8.68 billion. Adjusted earnings per share surged from $2.02 to $2.82 as the company reduced selling, general, and administrative costs by 120 basis points and recorded a $368 million gain from real estate sales, including its men's store in San Francisco. That EPS result topped estimates at $2.71.

CEO Jeff Gennette called the fourth quarter "solid," adding, "We are encouraged to see a trend improvement in our brick & mortar business, and we had the 34th consecutive quarter of double-digit growth in our digital business."

At Dillard's, meanwhile, results also topped expectations as the department store chain posted 3% comparable sales growth in the period and said net sales increased 6.5% to $2.06 billion, which included an extra week in the fiscal quarter and edged out the analyst consensus at $2.05 billion. Gross margin improved 48 basis points to 30.5%, and adjusted earnings per share soared from $1.72 to $2.82, which crushed estimates of $1.82.

"The positive sales trends we noted at the end of the third quarter continued through the fourth," said Dillard's CEO William T. Dillard II. "Our 3% comparable store sales increase combined with gross margin improvement and relative expense control led to a notable increase in pre-tax income for the quarter. We are working to keep this momentum into 2018."

Macy's stock cooled off during the earnings call after management elaborated on guidance, saying growth would be slower in the first half of the year, which may have pressured other retail stocks lower as it hurt expectations that industry momentum would continue into the new year. Still, full-year guidance was strong as the company projected a comparable sales increase of flat to 1%, and sees revenue falling 0.5% to 2% due to store closures, which includes losing a week, in the fiscal year. It also expects earnings per share of $3.55 to $3.75, down from an adjusted mark of $3.77 in 2017, but EPS is expected to grow when asset sales are factored out. Both forecasts were better than the analyst consensus at $3.04 for EPS and a 2.3% decline in revenue.

Dillard's did not include guidance in its earnings release, but given its strong comparable sales growth and improving gross margins, the company has solid momentum going into 2018.

Department store stocks and other retailers got off to a strong start this year after robust holiday sales and the corporate tax cut. Macy's and Dillard's reports indicate that that momentum continued into January, which should bode well for its peers. We'll learn more when J.C. Penney, Kohl's, and Nordstrom report earnings later this week.