Please ensure Javascript is enabled for purposes of website accessibility
Log In Help Join The Motley Fool
Free Article Join Over 1 Million Premium Members And Get More In-Depth Stock Guidance and Research
By Keith Speights - Feb 28, 2018 at 6:04AM

The maker of non-invasive monitoring technologies reported another great quarter, with record sales of its SET pulse oximeters.

Even before 2017 ended, you knew it was going to be a good year for Masimo Corporation (MASI -1.95%). When the medical device company reported its third-quarter results in October, demand for its pulse oximetry products was so strong that Masimo boosted its full-year guidance for 2017, after having already upped the guidance earlier in the year.

Masimo announced its fourth-quarter results after the market closed on Tuesday. The company officially ended 2017 on a strong note, with continued solid sales growth for its line of pulse oximetry devices. Here are the highlights from Masimo's fourth quarter. 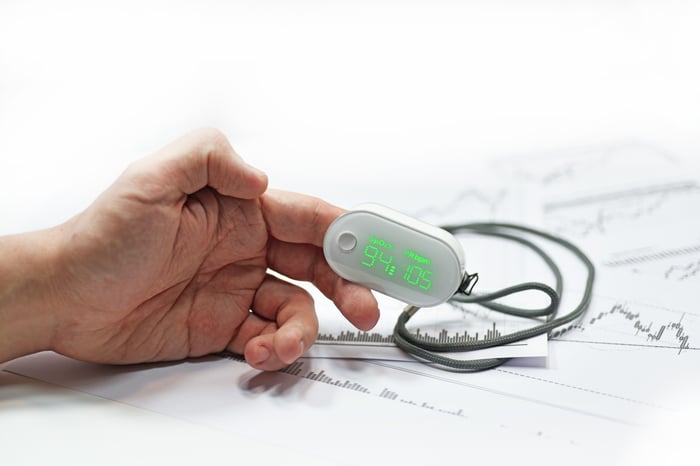 First, let's address that glaring drop in net income reported by Masimo in the fourth quarter. The good news is that there's nothing at all to be concerned about. This huge year-over-year decline stemmed from a couple of one-time items.

Masimo recorded a non-recurring charge of $43.5 million in the fourth quarter of 2017 related to U.S. tax reform. Also, the company's prior-year period revenue total was helped by a one-time gain of $270 million from a settlement with Koninklijke Philips.

Aside from these two items, everything looked great for Masimo in the fourth quarter. The company posted solid revenue growth. In particular, sales for Masimo's rainbow pulse oximetry products increased significantly, up 42.5% year over year to $24 million.

The company's adjusted earnings per share in the fourth quarter also increased from the prior-year period thanks to $68.3 million of share buybacks in 2017. Even with these buybacks, Masimo ended the year with total cash and cash equivalents of $315.3 million, up from $306 million at the end of 2016.

Our fourth quarter and full year 2017 results clearly illustrate the strength of our technology and hence, our business as we once again exceeded expectations for product revenues and earnings. We realized another record high for shipments of our SET Pulse Oximeters which reached 54,100 for the quarter and exceeded 200,000 for the year, a significant milestone for the company. We anticipate rising adoption of our technologies as more care providers appreciate the value they provide for patients.

Several new products could help Masimo this year. The company received FDA clearance for home use of its Rad-97 pulse oximeter in early January. This product could enjoy high demand as the use of telehealth and home monitoring increases. Also, Masimo announced FDA clearance later in January for its next-generation Sedline brain function monitoring technology.