With annual revenue of just over $1.2 billion, Wendy's (NASDAQ:WEN) may be diminutive in comparison to quick-service restaurant (QSR) competitors like McDonald's Corp. (NYSE:MCD) and Burger King parent Restaurant Brands International (NYSE:QSR), but the chain has consistently enjoyed higher premiums from stock investors. Take a look at Wendy's forward price-to-earnings valuation relative to these two formidable peers: 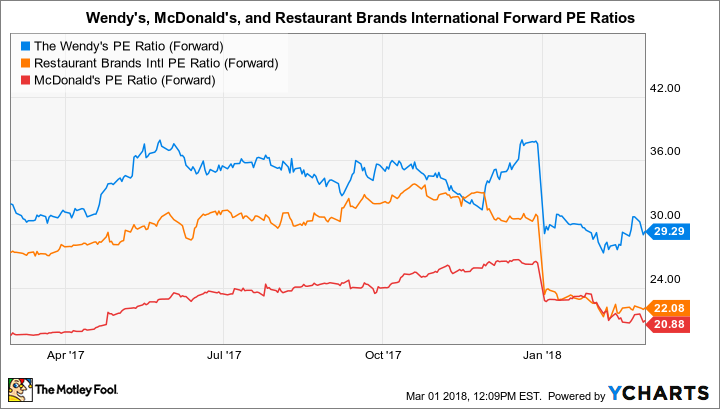 Why would investors pay a premium of roughly 40% for Wendy's? The company's operating margin typically hovers near the 20% level in any given quarter -- about half of the mark regularly achieved by McDonald's and Restaurant Brands International, which sported operating margins of 42% and 38%, respectively, in their most recent quarters.

One of the primary factors behind Wendy's favorable stock pricing is its consistent ability to expand franchisee volumes, i.e. store-level sales. Let's look at the strategies Wendy's employs to improve its metrics in an area that investors, especially institutional ones, watch closely.

Growth at the franchisee level

Out of a total store base of nearly 6,300 worldwide, only 337 are operated by Wendy's corporate arm. The company is 95% franchised, and long-term success consists of being able to lift systemwide sales quarter after quarter. Wendy's franchised stores in North America achieved an average unit volume (AUV) of $1.6 million in 2017, marking an improvement of roughly 5% cumulatively over the past two years. That's impressive in an environment in which consumers are spreading restaurant visits between QSRs like Wendy's and an ever-growing array of fast-casual chains. 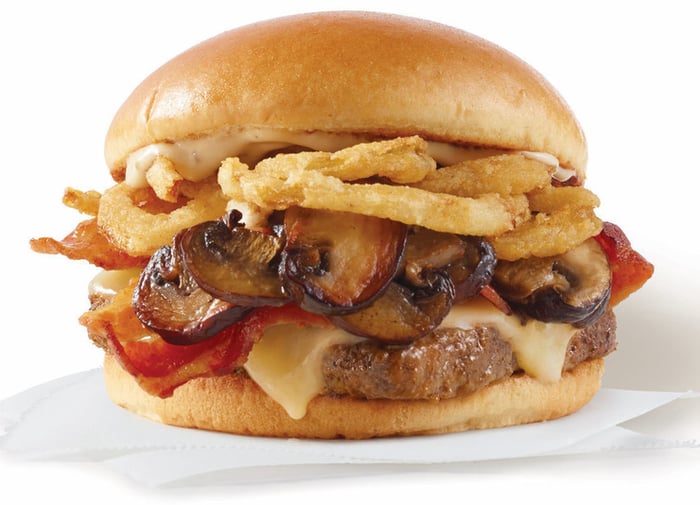 Some of Wendy's sales drivers are quite visible. The company has helped franchisees grow dollar volume through timely menu additions of premium items, like the enticing "Smoky Mushroom Bacon Cheeseburger" pictured above, while fighting back against McDonald's dollar value menu revamp with its own 4 for $4 value menu architecture.

But Wendy's has also plunged into the unit economics that increase its systemwide volume. It's important to understand that prospective franchisees look very closely at a system's AUV before moving forward with new development. Wendy's claims one of the higher AUVs in the industry, consistently ranking in the top five in quick-service restaurants in annual rankings compiled by QSR Magazine. One of the methods Wendy's uses to boost AUV is a process called "Franchise Flip," formerly known as "Buy and Flip."

In this exercise, the company buys back underperforming restaurants from weak franchisees, and turns around and sells, or "flips" them to stronger franchisee groups. In the latest iteration known as Franchise Flip, Wendy's plays more of a facilitation role in sales between franchisees. While Franchise Flip generates near-term revenue from consulting and licensing fees, the company benefits more palpably over a longer time horizon. That's because stores get transferred from the hands of marginal operators to high-performing franchise groups, which turn around these underperforming locations, lifting total AUV, as well as Wendy's royalty stream.

Wendy's has also fine-tuned its new store development and renovation initiatives in a manner that is more nuanced than that of its competitors. In its drive to upgrade at least 70% of its North American store base to its sleek new contemporary design by 2020 (a campaign referred to as "Image Activation"), the organization has rolled out the "Smart Design Platform." Smart Design enables franchisees to build smaller-footprint stores at a cost savings of approximately $300,000 over a standard building. A newer version dubbed "Smart Design Platform 2.0" targets an additional $150,000 in savings.

The mentality extends to troubled stores that may lack the capital to move and build in a new location, or even to afford a "refresh" to current design standards. Management has launched a refresh package aimed at franchisees with AUVs below $1.3 million. In the company's most recent earnings conference call, CEO Todd Penegor explained that the average store closure occurs when AUV hits $1.1 million. Thus, Wendy's now offers low-AUV franchisees a "Refresh Lite" package, which, according to executives, costs half as much as traditional refresh projects.

Assisting capital-starved, underperforming locations to successfully upgrade exterior signage and interior decor can greatly increase traffic flow in these aging locations. It's an intriguing piece of the company's overarching strategy to lift AUV, and a fine example of the attention Wendy's management pays to the true drivers of system success -- its owner-operators.