One of the biggest questions among Apple Inc. (NASDAQ:AAPL) shareholders is how the company will produce future growth in the face of slowing iPhone sales. The iconic device accounted for nearly 70% of the company's revenue in the most recent quarter, and sales of the iPhone increased a mere 3% year over year for the full fiscal year that ended Sept. 30, 2017.

The iPhone isn't Apple's only product, however, and the company still has several compelling opportunities to generate future growth, albeit on a somewhat smaller scale. 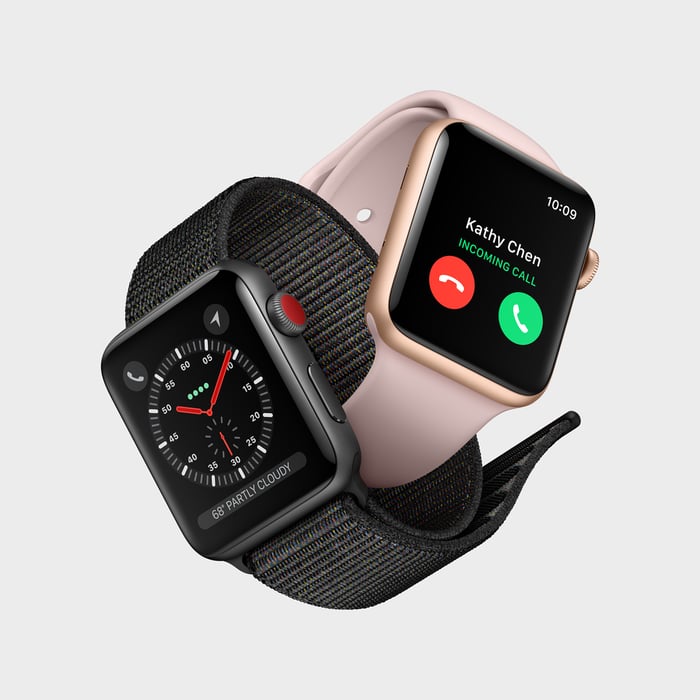 Is this the Apple segment to Watch? Image source: Apple.

The wearables market is one such opportunity. Growth in the industry is expected to average 20% in each of the next five years, according to a report by technology research firm CCS Insight. The largest portion of that market is smartwatches. As many as 71 million smartwatches are forecast to be sold in 2018, and that number could double to 140 million by 2022, resulting in a wearables market worth an estimated $29 billion.

Investors might be surprised to know that Apple is the single biggest player in the smartwatch market. The Series 3 Watch, unveiled in September 2017, introduced cellular connectivity that allowed users to leave their iPhone home since the Watch could make calls, send and receive texts, and stream music right from their wrist. This addition proved to be a significant growth catalyst for the device.

Apple reportedly sold 18 million Watches in 2017, up 54% year over year, according to estimates by industry research company Canalys. If those estimates are correct, Apple generated more Watch sales than the entire Swiss watch industry -- more than Rolex, Omega, and Swatch combined.

"Apple has become the market leader for smartwatches. Sales volumes have exceeded expectations and the introduction of a cellular-enabled model has pushed up the value of its sales, which we estimate at $5 billion in 2017," according to George Jijiashvili, senior analyst for wearables at CCS Insight.

More than just the iPhone

It is important to note that Apple doesn't reveal official sales figures for the Watch, but it has provided intriguing clues.

During its 2018 fiscal first-quarter earnings conference call, Apple CEO Tim Cook said it was the company's "best quarter ever for the Apple Watch," which grew over 50% in both revenue and units sold for the fourth consecutive quarter, producing "strong double-digit growth" in every geographic market. He also stated that the sales of the Series 3 Watch were "almost twice the volume of the Series 2 Watch in the prior year quarter."

Apple executives have been increasingly talking up Apple's wearables business, suggesting that the company has greater ambitions in the category.

Apple CFO Luca Maestri said "wearables were the second-largest contributors to revenue growth after iPhone." This resulted in $5.5 billion in revenue from Apple's other products in its most recent quarter. This is particularly impressive since Apple only entered the wearables market about three years ago. When combined with sales of AirPods and Beats products, total revenue from wearables grew nearly 70% year over year.

Add to this Apple's intentions to double its service business to $50 billion annually by 2020, and you begin to realize that while the iPhone still produces the bulk of Apple's sales, the company's future isn't entirely dependent on one product.