The oil sector used to be a top spot for income-seeking investors to collect some big-time dividends. However, crashing crude prices in recent years took many of those lucrative payouts with them. U.S. oil giant ConocoPhillips (NYSE:COP) for example, slashed its dividend by two-thirds in 2016 to preserve cash so it could survive the crash. Others announced similarly massive dividend reductions in the dark days of the oil market downturn to stay afloat.

However, after working hard to cut costs and shore up their balance sheets, oil producers are generating more cash flow than they have in years, which is only getting better now that oil prices are also improving. That's giving them the money to fund capital growth plans with plenty left over to return more cash to shareholders via higher dividends. Four that stand out after recently providing investors with big-time boosts are ConocoPhillips, EOG Resources (NYSE:EOG), Suncor Energy (NYSE:SU), and Canadian Natural Resources (NYSE:CNQ). 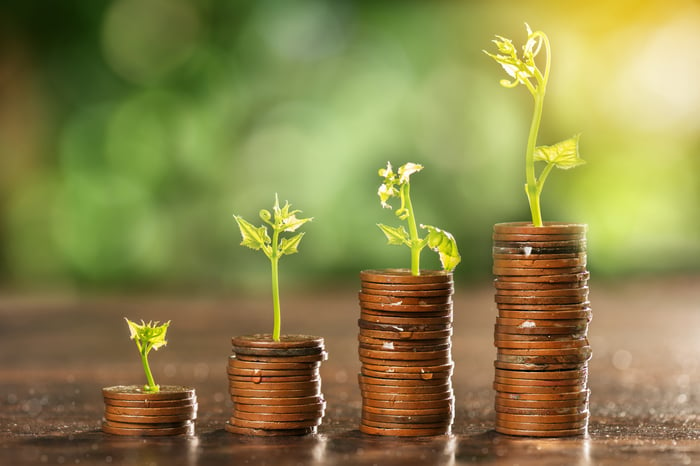 The big dividend increases in 2018 are likely only the beginning for these oil stocks. Image source: Getty Images.

Building it back up

ConocoPhillips might seem like a surprising name on this list given that it slashed its payout a few years ago. However, the company has significantly improved its financial situation since that time by driving down costs and selling assets, which gave it the cash to pay down debt. These improvements freed up cash flow so the company could boost its dividend 6% last year and by 7.5% in 2018. As a result, it now yields a slightly above-average 2.1%.

Meanwhile, ConocoPhillips should be able to continue growing its payout by at least a mid-single-digit rate for the next few years. Driving that view is the company's three-year operating plan, which should see it grow cash flow by a more than 10% compound annual growth rate through 2020, and that's assuming oil averages $50 a barrel.

EOG Resources had steadily increased its dividend before oil prices crashed. From 1999 until 2014, the company raised its payout 16 times, before holding it flat the last three years. However, with oil improving, the company resumed dividend growth this year, boosting the payout 10.4%. While that recent raise only increased EOG's dividend yield to 0.7%, there is a high probability that the oil giant can continue delivering double-digit dividend growth over the next few years.

Fueling that outlook is EOG's oil growth forecast. The company's low-cost operations and a large inventory of premium-return drilling locations position it to increase its oil output at a 15% compound annual rate through 2020 at $50 oil. Meanwhile, with oil in the $60s, the company would have the cash flow to increase production at a faster 25% rate over the next three years. That said, it doesn't need to grow that fast, which is why it's currently on pace to boost output 18% this year while potentially generating $1.5 billion in excess cash -- if crude holds the $60 a barrel level. That ability to grow quickly and still produce a ton of free cash should give EOG the fuel it needs to keep increasing its payout at a rapid pace. 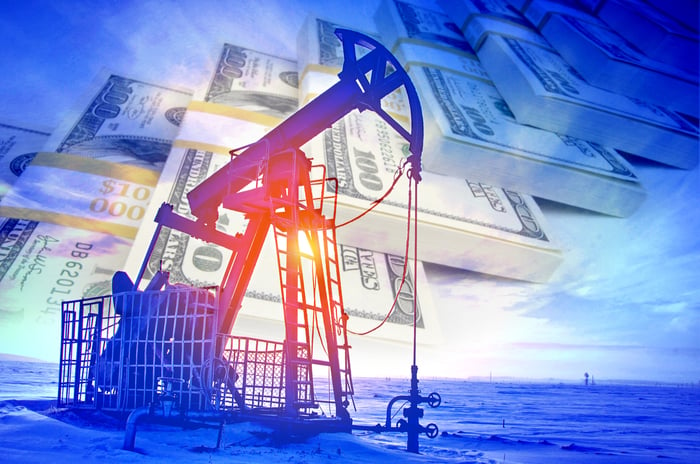 Unlike ConocoPhillips and EOG Resources, Suncor Energy continued growing its dividend during the oil market downturn. In fact, the Canadian oil giant has increased its payout at a 20% compound annual rate since 2012 and has paid a higher annualized rate for the last 16 years. While the company only provided minor dividend increases during the downturn, it hit the accelerator last year, raising the dividend 10% in 2017, and by another 12.5% in 2018. With its latest increase, Suncor yields an attractive 3.5%.

Suncor could continue providing raises in the low double-digit range annually over the next few years. That's because the company is on track to increase production at a 9% compound annual growth rate per share through 2020 due to the ramp-up of recent expansion projects. On top of that, cash flow should get an added boost from the company's continued efforts to drive down costs as well as from improving oil prices.

Canadian Natural Resources also continued growing its divided during the oil market downturn and has now paid a higher annualized rate for the past 18 years. That said, the growth rate has started accelerating thanks to the recent completion of the company's Horizon oil sands facility as well as the improvement in oil prices. After barely increasing the payout in 2015 and 2016, the company provided a 17% raise last year and recently announced an even more impressive 22% boost for 2018, increasing its yield to a well above average 3.3%.

Canadian Natural Resources should be able to continue growing its payout at a healthy pace over the next few years. According to the company's forecast, free cash flow should grow at a 13% compound annual growth rate through 2021, assuming current oil prices, providing it with ample funds to keep raising the dividend at a high rate over that timeframe.

A compelling sector for income investors once again

After a rough couple of years, oil companies are now firmly back on their feet and generating more cash than they need to run their business. Because of that, they're starting to reward investors once again with higher dividends. While the sector probably will never be as generous as it once was, it's beginning to look like an attractive option for those seeking a rising income stream.