Alibaba (NYSE:BABA) will buy the rest of Ele.me, China's top food delivery app, according to a recent Bloomberg report. Alibaba owned a 23% stake in Ele.me last May when the start-up was valued at about $6 billion. Ele.me then bought rival Baidu's (NASDAQ:BIDU) food delivery business in August in an $800 million deal which gave Baidu a stake in Ele.me.

This means that Alibaba needs to buy out the rest of Ele.me from Baidu and its other investors, as Ele.me controls 49.8% of China's food delivery market. 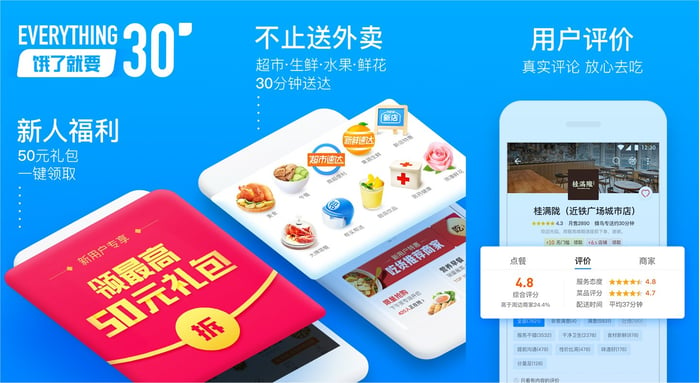 Its biggest competitor is Meituan Dianping, which controls 43.5% of the market. Meituan is backed by Tencent (OTC:TCEHY), the social media and gaming giant which is rapidly becoming Alibaba's biggest rival in online and offline retail.

This means that there's still plenty of room for leading platforms like Ele.me and Meituan to grow. The CCA also notes that online food deliveries are buoyed by the rising popularity of mobile payments in China, where about 60% of users pay for food with smartphones.

It's no coincidence that Tencent's WeChat Pay and the Alibaba-backed Alipay are the two top payment platforms in China and that the battle lines across deliveries, e-commerce, and brick-and-mortar stores are all being drawn with those ecosystems in mind.

The battle lines between Alibaba and Tencent

Alibaba's Tmall controls about half of China's e-commerce market according to Analysys International Enfodesk. Its closest rival, JD.com (NASDAQ:JD), controls a third of the market.

Tencent wants to conquer mobile devices by making WeChat the default app for everything on smartphones. However, Tencent has struggled in e-commerce, since most shoppers head straight to leading platforms like Tmall and JD. Tencent started letting companies sell products in WeChat stores last year, but that strategy hasn't locked in enough shoppers.

To catch up to Alibaba, Tencent bought about 20% of JD, then invested in, or partnered with, a growing list of brick-and-mortar retailers, including Walmart, Carrefour, Yonghui Superstores, and retail conglomerate Better Life. Tencent merged its WeChat user data with the shopper data from these retailers, integrated their e-commerce platforms into WeChat, and promoted WeChat Pay as a preferred payment option.

Alibaba fought back with investments in retail companies like Suning.com, Intime Retail, Sanjiang Shopping Club, and Lianhua Supermarket. Together, Tencent and Alibaba poured over $10 billion into brick-and-mortar retailers since the beginning of 2017.

How will Ele.me help Alibaba tackle Tencent and JD?

If Alibaba closes the Ele.me deal, it could merge the platform with its local commerce platform, Koubei. It could also integrate other parts of Tmall into Ele.me, allowing users to buy non-food products on the platform.

The deal could enhance Alibaba's "last mile delivery" options by having Ele.me deliverymen handle Tmall deliveries. This would complement the recent takeover of its delivery affiliate Cainiao, as well as its long-term plans to expand its logistics network. Doing so would give Alibaba, which mostly relies on third-party delivery services, an edge against JD, which operates its own delivery fleet.

It's doubtful that Tencent will sit idly by and let Alibaba integrate China's top food delivery platform into its sprawling e-commerce ecosystem. Therefore, it's likely that Tencent will either increase its stake in Meituan (possibly with the help of JD) or attempt a full takeover. But that could be a costly move since Meituan was valued at $30 billion last October, and it's unclear how much of the start-up Tencent actually owns.