After being left for dead, HP Inc. (NYSE:HPQ) has surprised most investors with its strong turnaround. When it was announced that Hewlett-Packard would split into two companies, HP Inc. and Hewlett-Packard Enterprise (NYSE:HPE), investors had low expectations for the computer maker.

The reason for the split was to allow HPE to "unlock value" by trading for expanded multiples, once that company no longer had the burden of its low-growth consumer hardware divisions. If there were any doubts as to which post-split company management assigned higher expectations to, they were answered by then-CEO Meg Whitman, who assumed the CEO role at HPE. 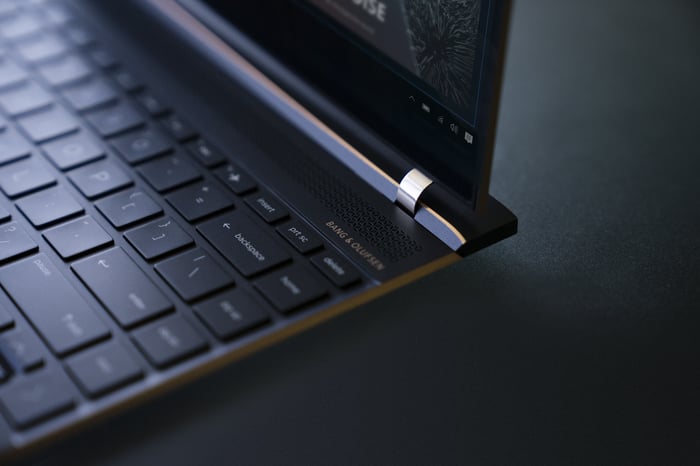 While management said that the split would allow HP Inc. to focus on product innovation, many were initially critical of this assertion, as innovation should have been unaffected by the presence of the enterprise business. Additionally, HP Inc.'s management pledged that approximately 75% of free cash flow payout would be returned to shareholders, signaling that payouts to investors would be emphasized over research and development. But this bearishness has been misplaced: HP Inc. has doubled the return of the S&P 500. 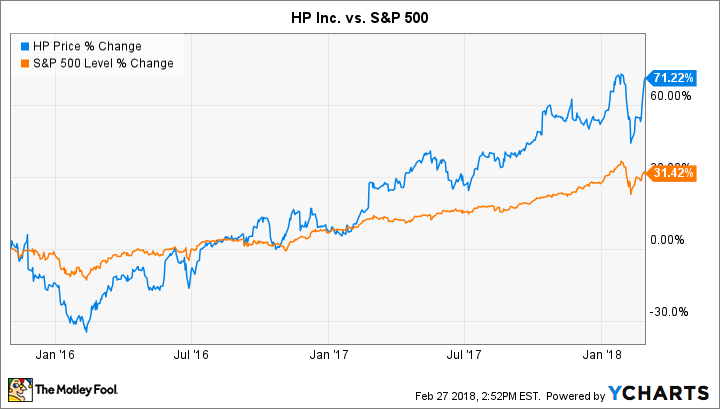 Post-split, it's been HP's personal systems that have helped the company's top line. In the last reported quarter, HP Inc. increased divisional revenue 15%, for the fifth consecutive quarter of double-digit revenue growth. While ultrapremium notebooks like Envy and Spectre have received the bulk of the credit for HP's reinvention, in the last quarter the company's desktop line of computers grew at a 17% clip.

Innovation has increased, with the company receiving 77 awards for innovation at January's Consumer Electronics Show. For full-year 2017, HP reclaimed the title as top PC maker, and one of only three major PC makers to post year-on-year sales increases.

The company's other division, printing, slightly underperformed personal systems last quarter; it posted a 14% year-on-year top-line increase, but its recent forays into 3D printing could be a large runway for growth. Recently, the company partnered with French 3D software company Dassault Systemes. In the company's earnings report it noted that its 3D customer list included FedEx and the U.S. Marine Corps.

Despite HP Inc.'s strong stock performance, shares of the company are still considered cheap. The overall S&P 500 is valued at 17.5 times forward earnings; HP trades at only 12. Additionally, shares now trade hands with a dividend yield of 2.5%, over 60 basis points more than the index. It should be noted that the forward earnings estimate is from Thomson Reuters analyst consensus, which estimates $1.95 per share while the company is guiding for 2018 earnings per share to be $2.58 at the midpoint.

While it's normal for hardware makers to trade at discounts to the greater market (Apple's forward price-to-earnings ratio is 13.5), HP Inc. appears to be undervalued considering its recent record of growth, shareholder-friendly capital return policy, and potential long-term growth catalyst of 3D printing. Investors looking for a turnaround story should put HP Inc. on their watchlist, and watch the company's 3D printing efforts closely.