DISH Network Corporation (NASDAQ:DISH) continues to disappoint investors, with the satellite television provider falling 11% in February, according to data provided by S&P Global Market Intelligence, as the company continues to wrestle with decreased demand for large subscription-TV packages. 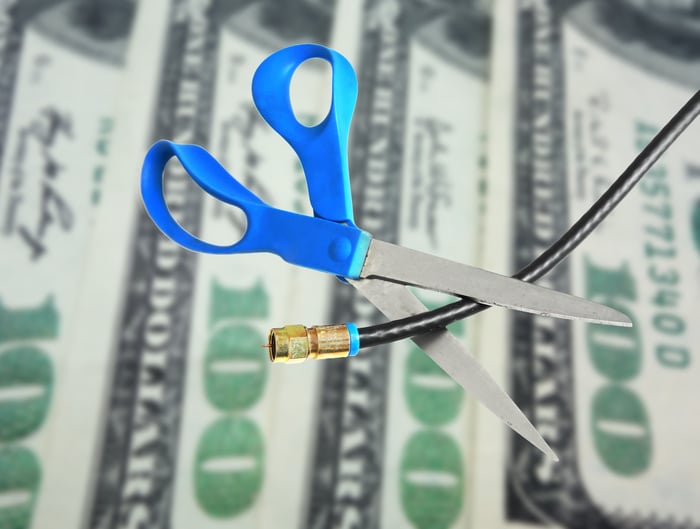 Investors were particularly unnerved by revenue in DISH's fourth quarter (reported late February). Total revenue attributable to DISH -- $3.48 billion -- came in below expectations, the fifth straight quarter of revenue misses and a decrease of 7.2% from the $3.75 billion posted in last year's corresponding quarter. Diluted earnings per share (EPS) were higher than analyst projections at $2.64, but this figure was aided by a tax benefit related to the recently passed tax law.

Although the company did increase net pay-TV subscribers by 39,000 in the fourth quarter, this is a somewhat misleading comparison since 75,000 reactivations occurred in Puerto Rico and the U.S. Virgin Islands after Hurricane Maria cleanup. Dish Network reported a total of 13.24 million subscribers in the United States as of year-end. In last-year's corresponding quarter, that figure was 13.67 million, a year-over-year decline of 3.1%.

Dish Network is affected by the same issues that plague the entire subscription-based television industry: revenue pressures from cord-cutting as more are forgoing service in favor of streaming substitutes. The bright spot in the report was the company's own streaming-based substitute: SlingTV. This was the first quarter in which the company finally decided to disclose subscribers -- and the service reported 2.2 million subs, a 47% increase over the prior year.

The company had resisted disclosing SlingTV subs, reporting both SlingTV and traditional pay-TV packages as a consolidated number. Critics and analysts pointed out that this method made it difficult to discern how traditional (and more lucrative) TV was performing, so it's encouraging the company finally disclosed this figure. Unfortunately for the company, the numbers in traditional pay TV were as bad as -- or worse than -- expected, with the company losing 9.4% of its traditional television package in a year.

It's likely DISH will continue to experience pain until losses in its bread-and-butter traditional pay-TV product ameliorate.