Restaurant Brands International (NYSE:QSR) has never shied away from debt in its drive to expand earnings. The parent company of Burger King has proved an enthusiastic deal-maker, acquiring the Tim Hortons brand in 2014, and Popeyes Louisiana Kitchen last year. Along the way, it's added a fair amount of leverage to its balance sheet. Should shareholders worry that Restaurant Brands has a little too much debt on its books for comfort?

At the end of 2017, Restaurant Brands' total debt stood at $11.8 billion, a 40% increase over 2016 year-end debt of $8.4 billion. While the company undertook several debt issuance and repayment transactions during the year, most of the increase can be traced to a redemption of $3.0 billion in preferred shares. These were originally issued to Warren Buffett's Berkshire Hathaway to finance the Tim Hortons acquisition.

Redeeming these shares was a sensible action, since Restaurant Brands was obligated to pay dividends carrying a hefty yield of 9%, or approximately $270 million annually. Based on the debt schedule and statement of cash flows in the company's 2017 annual report, we can see that Restaurant Brands issued long-term notes at 5% to fund the share redemption. So the organization is saving 4% in cash outlay each year ($120 million) on the $3 billion obligation, by swapping the dividend obligation for new long-term debt.

Now that we've looked at debt balances, let's check if operating cash flow sufficiently covers borrowing repayment needs. A common way to assess this ability is through "times interest earned" -- that is, the number of times a company can cover its interest expense obligations from EBITDA, which serves as a proxy for operating cash flow.

A commonly used rule of thumb states that times interest earned above 2.5 is generally considered a safe reading. Restaurant Brands has improved over the past few years, from a dangerously low level to one that skates above the recommended benchmark: 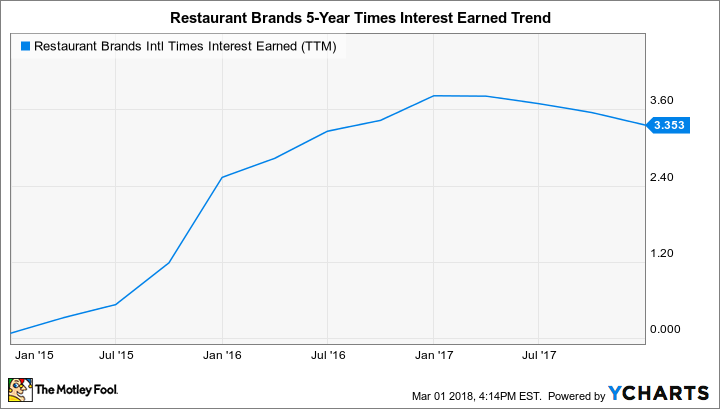 Note that since the preferred shares are characterized as a separate obligation from debt, the impact of related dividend payments isn't reflected in the times-interest-earned formula. And while debt grew in 2017, strong operating cash flow kept the metric from dipping at a steeper rate than the gradual curve we see in the chart.

Let's also review debt-to-EBITDA, which reveals the relationship between total debt load and annual earnings. Restaurant Brands International is heavily leveraged by this metric as well, with total debt at nearly 6 times EBITDA. A reading of between 1 and 3 is considered normal. That means long-term debt on the company's books is roughly equal to six years' worth of EBITDA.

Before we get too alarmed, it's prudent to put this metric in context, by comparing it with a group of the company's quick service restaurant (QSR) industry peers: 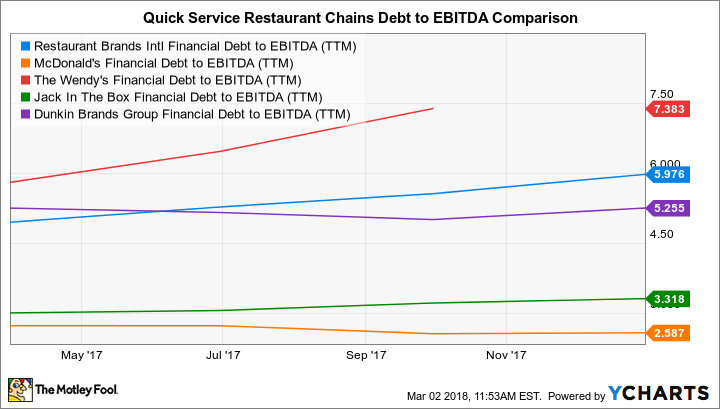 While McDonald's and Jack in the Box exhibit moderate borrowing, Restaurant Brands and Dunkin' Brands have steep debt levels relative to annual earnings. As for Wendy's? You can say that it's leveraged to the hilt.

Of course, Restaurant Brands, Dunkin' Brands, and Wendy's share key similarities in their business models and financial structure. All three are 95%-plus franchised operations -- most of their income is derived from franchise fees and royalty checks from franchisees. Because of this stable stream of income, each by choice remains highly leveraged regardless of current business cycles. The three companies use all available cash flow after capital investment to repurchase shares, pay out dividends to shareholders, and acquire other competitors.

This model trims profit margin because of the substantial interest expense on debt. But it's not uncommon in the QSR industry. And in the case of Restaurant Brands, shareholders for now are content to accept an expanding top line, via debt-financed acquisitions, over healthier current profits. As we've seen, the company is highly leveraged. But it can still meet its debt obligations, and remains just shy of being considered over-leveraged.