Is Boston Beer (NYSE:SAM) finally on the brink of a turnaround, or is this yet another case of the craft brewer sampling one too many of its new seasonal beers? Despite missing analyst earnings yet again, the maker of Samuel Adams beer and Angry Orchard cider says it is looking for shipments to finally turn positive in 2018.

Not that its flagship beverages are going to help the cause. Retiring CEO Martin Roper said that despite the reintroduction of Boston Beer's popular Cold Snap seasonal beer and the launch of its unique Sam '76 lager and ale experiment, the Samuel Adams brand isn't expected to grow this year and might not turn positive for several years in fact, but that's the brewer's goal. 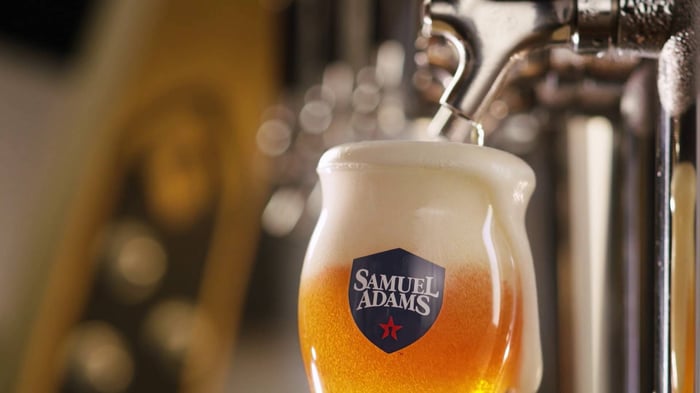 Similarly, the cider category as a whole remains weak and Angry Orchard, as the largest brand in the space, has fallen hardest. Boston Beer is trying to spice up the line by introducing a Rose version and is encouraged by its initial reception, as well as by the category decline starting to slow.

So although the craft brewer forecasts companywide shipments to grow anywhere from 0% to 6%, Roper admits there are a lot of unknowns in those forecasts. "Certainly our hope would be to return the (Angry Orchard) to growth, but that obviously is uncertain."

Undoubtedly that's why the market chose to focus on the likelihood of 0% growth in shipments and depletions, or sales to distributors and retailers, which is an industry benchmark for demand, and send Boston Beer's shares tumbling. Despite the stock hitting $202 per share just before the earnings release, a level the brewer hasn't seen since early 2016, the stock's value plunged almost 20% on the news.

So is it investors or management that's wearing the beer goggles? History would suggest the latter.

Boston Beer has been saying for some time that its business is moving in the right direction and it's looking to return the company to growth. While that may be so much boilerplate and putting on a brave front, investors shouldn't give much credence to the outlook.

The craft brewer has thrown a lot out there over the past few years in an attempt to turn the business around, from updating its packaging to glomming onto trendy fads in brewing, such as a New England-style IPA that eschews a beer's clarity in favor of a decidedly cloudy look. Nothing has worked, and though management says it's encouraged by how trends are faring in the first quarter, with year-to-date depletions through Feb. 10 running about 6% higher than a year ago, it must be remembered that the first quarter of 2017 was marked by a double-digit decline in depletions. It's a very low bar for Boston Beer to step over. 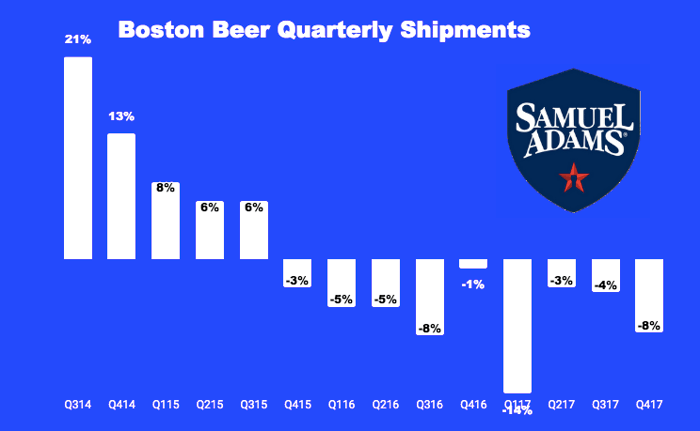 The brewer is seeing continued gains from its Twisted Tea brand and the Truly sparkling seltzer, but the latter is only a very small portion of its business and could, like its hard soda experiment, implode very quickly as the novelty wears off. Enjoy the gains while they last, but maybe don't count on them lifting Boston Beer very far.

Revenue has fallen for two consecutive years at the craft brewer as it finds itself caught between mega brewers like Anheuser-Busch InBev and Molson Coors on one side and a perfusion of smaller craft brewers that now number around 6,000 and keeps growing.

Even though Boston Beer's shares have tumbled and it's coming up against easier comparisons, the heart of the brewer's business remains dysfunctional and at odds with what is happening in the industry. There's really nothing to suggest a turnaround is actually taking hold and it's quite possible the situation can still get worse for Boston Beer before it gets better.