Things have been looking up for Kroger (NYSE:KR) lately as the retail grocery giant has strung together several consecutive quarters of accelerating sales growth after shrinking in late 2017.

Kroger will be looking to extend that streak when it announces its holiday-quarter results on Thursday, Mar. 8. Let's take a closer look at what investors can expect from that report

Comparable-store sales have improved for three straight quarters, and in November, they topped 1% for the first time in over a year. CEO Rodney McMullen and his executive team are forecasting acceleration of growth in the holiday quarter. Following a strong start to the season, especially at its Fred Meyer brand, the retailer said comps should rise by more than 1.1%.

If Kroger exceeds that goal, executives will likely credit strong demand in its organic food segment. That division recently passed $1 billion of annual sales to account for almost 20% of the country's organic produce industry. Its overall figure will be judged against Walmart, its main rival in many key markets, which recently announced a 2.6% comps boost for the holiday period to mark a slight deceleration from the prior quarter's 2.7% increase.

Like Walmart, Kroger has made it clear that it's willing to sacrifice profitability to defend its market share. In fact, price cuts have sent net margin down to 1.2% of sales over the past nine months from 1.7% in the year-ago period. The promotions have worked, though, by keeping customer traffic and sales volumes in positive territory. 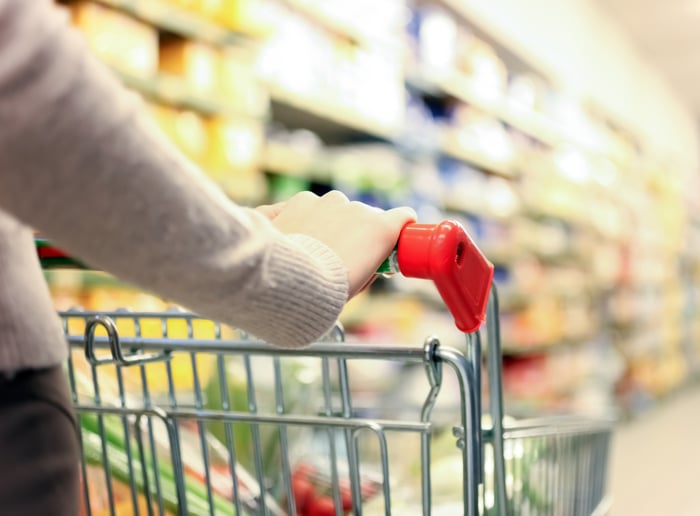 That's why the company has "no intention of giving up the momentum we've gained on low prices," according to executives. Gross margin dipped by 0.2 percentage points last quarter to 22.4% of sales, and investors will find out this week whether the retailer was similarly aggressive during the holiday shopping season. Its most recent forecast calls for adjusted profit to land at between $2 and $2.05 per share for the year, down from $2.12 in 2016.

McMullen and his team recently stepped away from their long-term financial goals that had been targeting annual profit gains of between 8% and 11%. While promising decent improvements in areas like cash flow and direct shareholder returns, Kroger has been warning that its growth initiatives will be expensive and will likely require elevated capital spending at least through 2020.

The moves should position the company to attract more digital sales, which includes attacking the over $1 trillion market for prepared food delivery. Kroger believes its vast network of stores and its base of over 60 million loyal customers should help it win in this competitive space.

But before it can aggressively branch out into new arenas, the supermarket chain needs to show a streak of consistent growth and steady, or rising, profitability. Once the business stabilizes, executives will be in a better position to determine whether the company can get back to generating those double-digit annual profit gains that powered strong shareholder returns up until early 2016.