The biotech sector is a tricky one for investors to navigate. There are many ways for a business to fail, the costs to bring a drug to market can be extensive, and the need to pass heavy regulatory scrutiny in all aspects of operations make the industry challenging for even the best operators.

So which biotech stocks do we Fools think have what it takes to deliver for investors? We asked a team to weigh in, and they picked Novavax (NASDAQ:NVAX), Amgen (NASDAQ:AMGN), and Geron (NASDAQ:GERN). 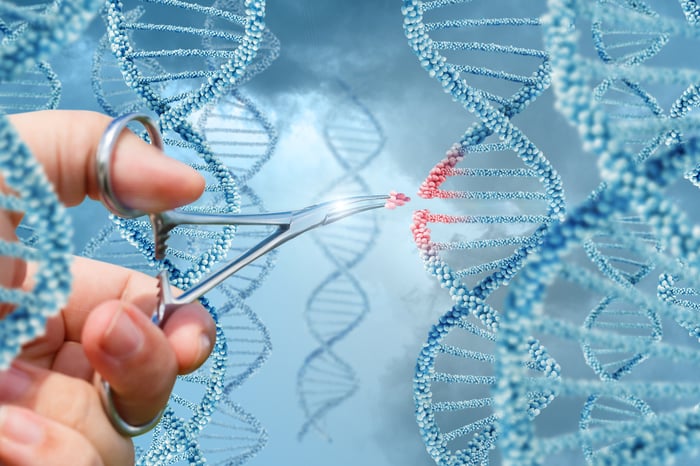 Keith Speights (Novavax): It's been an especially nasty flu season in the United States. Part of the problem is that the current flu vaccines on the market haven't been as effective as desired. But one biotech could have a much better flu vaccine in development.

I don't think it's too late to buy this promising biotech stock, though. The market for flu vaccines in seven major markets is more than $3 billion annually. If NanoFlu delivers on its potential, Novavax could be in great position to capture a big chunk of that market.

In addition, the company is evaluating its respiratory syncytial virus vaccine in a late-stage study for maternal immunization of infants. An interim analysis from this study is expected in mid-2018, with primary outcome results likely to be announced in early 2019. This vaccine, if approved, could reach peak annual sales of around $1.5 billion.

Novavax is risky, though. There's no guarantee of success for either NanoFlu or the RSV vaccine. I like the prospects for this stock, however, and think it has plenty of room to run after a astronomical rise so far in 2018.

Sometimes, a great investment is hiding in plain sight

Chuck Saletta (Amgen): One of the toughest parts of investing in biotech businesses is that a high proportion of those companies fail. That sobering fact makes the survivors -- those that go on to become profitable businesses that treat and cure diseases -- that much more valuable. Amgen, with a better that $130 billion market capitalization, is one of the biggest around, yet there are some compelling reasons to view it as a top biotech stock to consider buying in March.

First, Amgen is trading at an impressively low multiple of its anticipated earnings. The market is only asking around 13 times  what the company is expecting Amgen to earn over the next year. That's a bargain price for a leading company, even for one like Amgen, where the business isn't expected to deliver massive levels of growth.

Additionally, Amgen has an impressive new drug pipeline, including compounds in phase 3 clinical trials to treat such scourges as Alzheimer's, leukemia, osteoporosis, and chronic heart failure. While there are no guarantees of success, a robust portfolio of products in late-stage clinical trials provides a great chance for continued success over time. That's especially important in research-based medical businesses like Amgen's, where expiring patents can cause a substantial loss of revenue.

A company with proven successes and a pipeline to continue to build on that success such as Amgen is one worth considering owning. When it's available at a reasonable valuation as it appears to be now, it's worth a look for potentially buying.

George Budwell (Geron Corporation): Not many stocks under $5 are worth are worth even considering, but the small-cap biotech Geron might be a rare exception to this general rule.

Why? The main reason is that Geron is only weeks away from announcing the latest internal data review for its experimental blood cancer drug, imetelstat, that it licensed out to Johnson & Johnson's (NYSE:JNJ) biotech wing, Janssen, in the waning months of 2014. Janssen is currently evaluating the drug in patients with advanced myelofibrosis (MF) and myelodysplastic (MDS) syndromes.

Taken together, these first two hematological indications are projected to be worth well over $1 billion in peak sales, and there's the growing possibility that imetelstat might turn out to be an important new therapy for each of these myeloid-based disorders.

What's on the near-term horizon? Geron is scheduled to release its fourth-quarter earnings on March 16 after the closing bell. Afterwards, the company plans on holding a conference call for analysts and investors the following Monday at 8:30 a.m. ET.

While there's a good chance that this upcoming earnings release and accompanying conference call will be turn out to be non-events, I'm cautiously optimistic that Geron may, in fact, give crucial updates on three core issues:

If this conference call comes and goes without any major updates, however, investors should take solace in knowing that imetelstat's third internal review will most likely be available in early April at the latest. At that point, we should finally know whether imetelstat is the real deal, or yet another dead end in the battle against these deadly forms of blood cancer.