The clinical-stage cancer specialist Geron Corporation (NASDAQ:GERN) defied the downturn in the broader markets over the past two trading sessions by actually gaining a noteworthy 25.2%.

Now, at first glance, this hefty move may seem like nothing more than a sectorwide rotation into small- to mid-cap equities after large caps like AbbVie exploded higher to start the year. All of the best-performing healthcare stocks in the last week, after all, had market caps well below $2 billion. 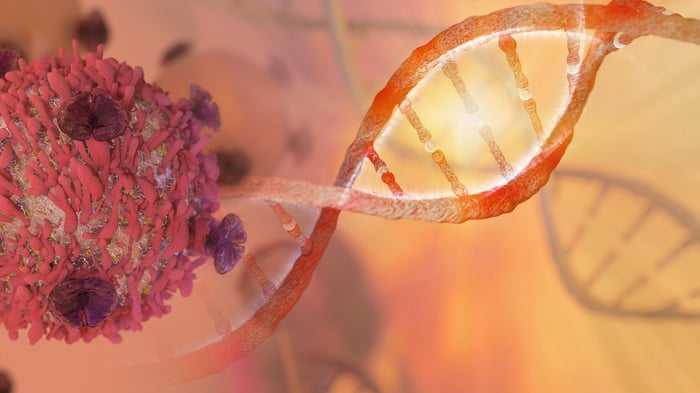 However, I think there's a lot more going on than simple asset-class rotation in regards to Geron's sudden price spike. Here's why.

The first encouraging sign is that Geron's move higher was accompanied by a massive surge in volume. For example, the biotech's shares gained a healthy 7.66% on seven times the normal daily volume yesterday, making it one of the most heavily traded stocks across all major U.S. exchanges. That fact alone suggests that something else besides asset-class rotation is going on.

Next up, Geron's call options went absolutely nuts from both a price and open interest standpoint yesterday. In fact, someone -- or perhaps a group traders -- took out bets that Geron's March 16 $4 and $5 out-of-the money call options would actually pay off.

Not only does this speculative call action imply a possible 100% appreciation from current levels, but it's also interesting because the liquidity on these options contracts will evaporate if there is no material news coming down the pike. Options on small-cap companies like Geron, after all, often suffer from a lack of liquidity, rendering them worthless as the expiration date approaches. Either these traders weren't aware of this fact, or they expect Geron to release a meaty material update in the next six weeks.

Although news leaks can and do happen all the time in biotech, I think this recent uptick in Geron's share price has a more down-to-Earth explanation. Last October, Geron and its development partner Johnson & Johnson (NYSE:JNJ) revealed that the U.S. Food and Drug Administration (FDA) requested more information on the risk-to-reward ratio for the duo's telomerase inhibitor, imetelstat, regarding its ongoing trial in patients with advanced myelofibrosis (MF).

As this information request could, in theory, lead to yet another clinical hold or perhaps worse, this news clearly piqued the interest of short-sellers. As proof, Geron's short interest rose by 18% in the intervening time period -- despite the company already sporting a mind-bending level of short interest for the entirely of 2017. The net result is that over 21% of Geron's outstanding float was short at last count. 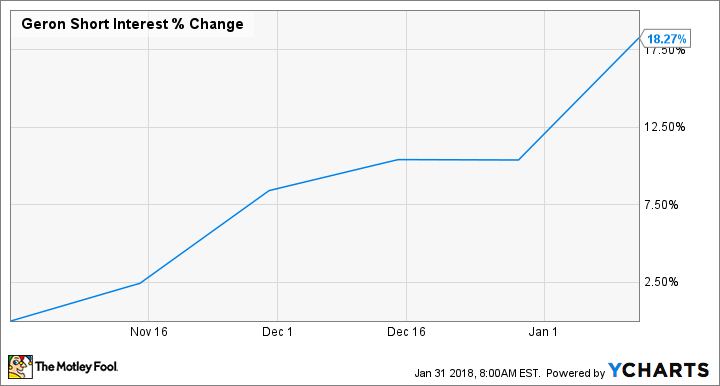 On Jan. 23, 2018, however, short-sellers got some bad news: J&J's latest pharmaceutical pipeline update named imetelstat as a key asset under development. Obviously, the pharmaceutical giant wouldn't have done so if the FDA was about to pull the plug on the drug's MF trial. The agency has now had over three months to evaluate J&J's response to this information request and nothing has happened. Therefore, the FDA appears willing to let trial proceed to its scheduled third internal review at the end of the first quarter.

Short-sellers appear to be covering now that the possibility of an imminent clinical hold has diminished significantly. That doesn't mean that imetelstat is destined to hit the mark in MF. But it does strongly imply that the FDA saw enough of a clinical benefit to let the trial play out.

My hunch (and it's nothing more than a hunch) is that imetelstat will show an overall clinical benefit in MF in its next internal review, sparking a continuation decision by J&J. And at least some options traders apparently agree with this assessment based on the activity over the past few sessions.

Having said that, Geron remains an extremely speculative play that could reverse course in a hurry if its one and only drug candidate -- imetelstat -- doesn't pan out. Short-sellers, though, do appear to be rethinking their bearish position heading into this pivotal clinical update later this year.