There are three stages in the financial "life cycle" of an investor -- accumulating wealth, preserving the wealth you've created, and depleting that wealth in retirement.

In your 40s, most people are still in the accumulation stage, although they don't have quite as much risk tolerance as someone in their 20s or 30s. For this reason, it's important to focus on stocks that aren't excessively volatile or risky, but that also have significant growth potential over the 20-plus years until you retire. Here are three of my favorite examples -- all of which I own in my personal portfolio and plan to hold throughout my 40s and beyond. 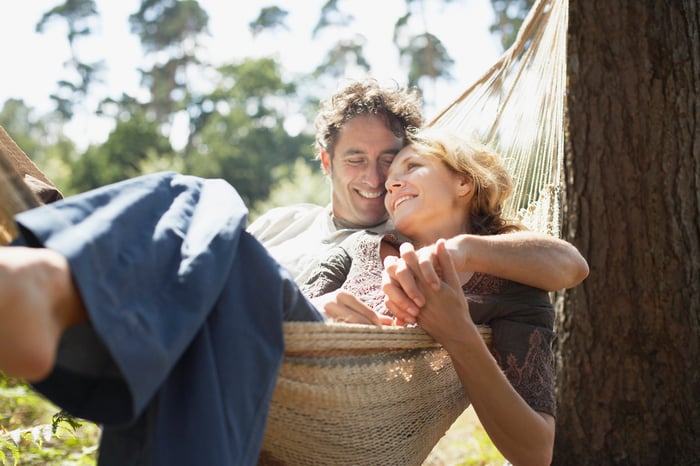 The best overall dividend stock in the market?

There aren't many stocks with a track record of dividends that's quite as impressive as Realty Income's. The company has made more than 570 consecutive monthly dividend payments and has increased its payout 95 times since its 1994 NYSE listing. In addition, Realty Income has delivered total returns averaging more than 15% annually, even after the stock's recent drop.

Realty Income has been able to maintain its excellent dividend history for two main reasons. First, the business model is designed for consistent and predictable income. Tenants sign long-term triple-net leases, which shift the variable costs of property ownership to the tenant, and also have annual rent increases built in. In other words, Realty Income simply puts a tenant in place and enjoys years of predictable income.

Also, the company invests in properties occupied by recession-resistant and e-commerce-resistant retail businesses, such as service-based businesses and deep discount retailers. Of the 24 major retail bankruptcies that took place in 2017, 21 of them didn't have the attributes Realty Income looks for.

Not only is Realty Income one of the best dividend stocks in the market, but it's also a bargain right now. A combination of rising interest rates and fears about the retail sector have pushed the stock down by more than 33% since peaking in mid-2016.

There's little not to like about Berkshire Hathaway, the conglomerate led by billionaire Warren Buffett. An insurance company at its core, Berkshire uses the cash its insurance business brings in to acquire other businesses, which in turn generates capital that Berkshire can use to acquire even more businesses or add to the company's massive stock portfolio.

As of early 2018, Berkshire has grown into a collection of 63 subsidiary companies, including household names such as Geico, Clayton Homes, Duracell, Fruit of the Loom, and Pampered Chef, just to name a few. In addition, Berkshire has a stock portfolio valued at about $185 billion, with major investments in rock-solid companies such as Apple, American Express, Wells Fargo, Bank of America, Kraft Heinz, and Coca-Cola.

To be clear, Berkshire won't deliver the 20%-plus annualized returns it has generated over the past half-century -- not even close. The company has simply become too large for this to be practical. Even Buffett has cautioned investors not to expect the same level of performance.

Having said that, Berkshire's business model, combined with the talents of the individuals running the company, should still be capable of market-beating returns in the years and decades ahead. It's still one of the best risk-reward stocks that growth-oriented investors can buy.

A REIT for the next 50 years

Digital Realty Trust is a REIT that specializes in data center properties, which are specialized facilities designed to provide a secure and reliable environment for servers and networking equipment. Digital Realty is one of the largest REITs of any kind in the market, with 205 data center properties located in 12 countries (most in North America), with 32 million square feet of rentable space.

Digital Realty has grown impressively in its relatively short history. Since 2006, funds from operations have grown at a 12.3% annualized rate, and the dividend has grown just as quickly.

With the surge in connected devices still very much in its infancy, there's a huge opportunity for growth in the years ahead, particularly internationally. For example, the number of autonomous vehicles is expected to grow at a 37% annualized rate through 2025, and the artificial intelligence market is projected to grow even faster.

Digital Realty has about 2,300 customers, and its largest ones read like a who's who of major tech companies. Jut to name a few, the top 10 includes IBM, Facebook, Oracle, Verizon, and LinkedIn.

If You're in Your 40s, Consider Buying These 3 Stocks @themotleyfool #stocks $BRK.A $BRK.B $O $DLR Next Article
Current