Costco Wholesale (NASDAQ:COST) has grown to become a worldwide presence in the retail industry. Although most investors focus on the more than 600 locations that the warehouse big-box retailer has in the U.S. and Canada, Costco also has more than 130 stores in other countries, with Mexico, the U.K., and Japan representing its largest international markets after the Great White North.

Coming into Wednesday's fiscal second-quarter financial report, Costco investors wanted to see continued solid growth trends from the retailer's overall operations. Sales growth in its core geographies were good, but where the fastest growth came from was its global locations, and investors will want to keep a close eye on that part of the retailer's business going forward. Let's look more closely at Costco Wholesale and what its latest results say about its future. 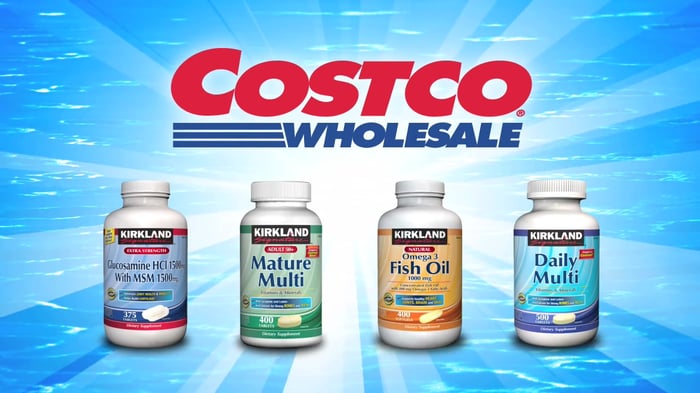 How Costco fared this quarter

Costco's fiscal second-quarter report showed continued strength in key fundamental metrics, although not necessarily to as great an extent as some had wanted to see. Total revenue climbed almost 11% to $33 billion, which was marginally better than the 10% growth rate that most investors were expecting to see from Costco. Net income jumped 36% to $701 million, although after taking out some one-time items, adjusted earnings of $1.42 per share was slightly weaker than the consensus forecast among those following the stock for $1.46 per share on the bottom line.

Tax reform had a positive impact on Costco's results for the quarter. The company posted a net tax benefit of $74 million resulting from revalued deferred tax attributes, and that added about $0.17 per share to Costco's GAAP earnings.

However, the calendar didn't do Costco any favors. The company said that because of the change in Thanksgiving's timing, it saw revenue from the Black Friday holiday weekend get shifted back into the fiscal first quarter this year, whereas it had been in the second quarter last year. That cut U.S. sales by 1.4%, with a 7% to 8% impact on e-commerce sales for the Costco website.

Comparable sales growth was solid for Costco, although they weren't quite as good as they were in the fiscal first quarter of 2018. Overall comps rose 8.4%, but gas inflation and favorable foreign exchange impacts were responsible for about three percentage points of that increase. In the U.S., growth in comps of 7.1% fell to 5.7% when factoring in gasoline and currency impacts, while Canada's 8.7% rate dropped to just 2.5% on an adjusted basis. Sales from Costco's other international segment were the strongest of all, with a 15.7% rise in comparable sales that got cut by more than half because of the weak dollar and gas price impacts. E-commerce sales rose 27% on an adjusted basis.

Costco continued to add new stores to its network. The big-box warehouse network has 749 stores in total, with new locations added to the U.S., Mexico, and Korea during the quarter.

The key for Costco's future is to keep growing in smart ways while hanging onto the customers it has. The rise in membership fee revenue shows that Costco has succeeded in avoiding major customer defections, and the recent decision from Wal-Mart (NYSE:WMT) to close a select group of its Sam's Club warehouse retail operations could open the door to some growth for Costco.

In the long run, the bigger threat to Costco remains the ongoing evolution of e-commerce. Costco has itself invested substantial amounts toward countering this threat, and newer services that it provides will be able to address some core wishes among its customer base. But at its core, the question will be whether consumers broadly change their preferences, shifting away from the desire to shop in physical stores and look at and touch items before they buy. The answer could prove to be different in the U.S. compared to various international locations, making it all the more important to maintain geographical diversification.

Investors had mixed views on Costco's report, and in after-hours trading immediately following the announcement, the stock traded on either side of where it closed the regular session. Costco remains a stronger choice than many other retailers, but shareholders will have to remain diligent to ensure that the company stays ahead of changing trends.