Spotify, the undisputed leader in streaming music, has long been rumored to be preparing for a Direct Public Offering on U.S. exchanges. Reports early this year indicated that the company had filed a confidential registration, an important first step in preparation for its official debut.

The filing with the U.S. Securities and Exchange Commission (SEC) was posted on Feb. 28, providing potential investors with a wealth of previously unavailable information. The company will trade on the New York Stock Exchange (NYSE) with the ticker symbol SPOT.

Here are a few of the key metrics that will be of interest to anyone considering an investment in the company when it makes it goes public. 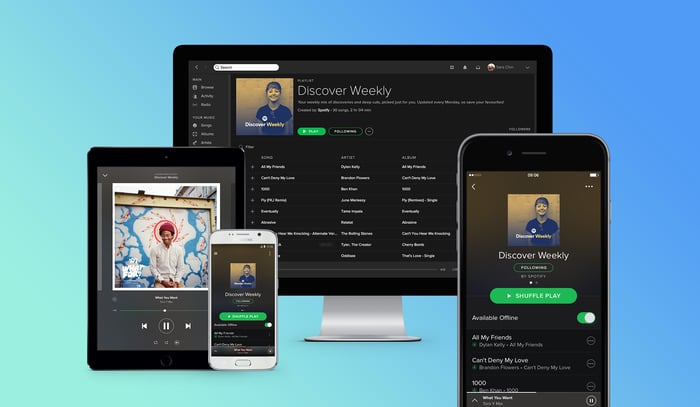 According to its Form F-1 filing, and as you can see in the table above, Spotify is enjoying rapid revenue growth but at great cost given its widening losses on the bottom line.

And while gross margins have steadily improved to 20.8% of revenue, expenses, on the other hand, have trended upward, consuming 30% of revenue in 2017, up from 25% in the prior year.

Research and development expenses grew, in both absolute terms, and as a percentage of revenue. Last year, R&D grew 91% year over year to 396 million euros, or 9.7% of revenue, compared to 207 million euros, or 7% of revenue in the prior year. The company said it was investing heavily in R&D "in order to drive user engagement and customer satisfaction" on the platform.

Sales and marketing expenses experienced the same trend. These costs grew to 567 million euros, up 54% year over year, making up 13.9% of revenue, up from 12.5% in the prior year.

Spotify's 71 million paying subscribers make it nearly twice the size of its nearest streaming music competitor, Apple, which has an estimated 36 million subscribers.

However, the average revenue per user (ARPU) is declining, down 14% in 2017. The company explained that the lower ARPU was the result of growth in its family plan and the effect of foreign exchange rates.

User engagement is soaring though. The number of hours spent on the platform grew to 40.3 billion. Spotify also reported that premium churn continues to decline, down to 5.5% to end 2017, compared to 6.6% at the end of 2016.

The ad-supported business works as a funnel, channeling users to the premium service, and as a result, more than 60% of paying members were once part of the lower tier, ad-supported offering.

Not surprisingly, the company's largest market was Europe with 58 million MAUs. Though Europe and North America saw robust user growth, the fastest growing regions were Latin America and the rest of the world, up 37% and 54%, respectively.

A warning to investors

Spotify issued a cautionary note to potential investors regarding its direct public offering, compared to a traditional IPO:

There are several benefits to Spotify's chosen path to listing. The company will potentially save hundreds of millions in underwriting fees. Additionally, insiders will be free from the required lockup period that restricts them from selling shares that typically comes with an IPO.

Investors should be cautious. The non-traditional path of direct listing, combined with a company that is not yet profitable could conspire to produce higher than normal volatility when Spotify's stock debuts.