It's been a pretty good five years to be a shareholder of Tyson Foods (NYSE:TSN). The company's stock has risen 215% in that span -- not including dividends -- nearly tripling the returns of the S&P 500. That's no small feat for a company that has the designation of being the largest food producer in the United States, but every penny of the gains has been earned. Management has steadily improved earnings and cash flow over the years, while returning more and more of the extra cash to shareholders through dividends and share buybacks.

Despite its solid performance in recent years, there aren't many reasons to think that the share price can continue to ascend higher. Tyson Foods is still in the midst of a company-changing -- and perhaps industry-changing -- growth strategy. Several tailwinds in the global markets and audacious bets on new food products and technologies hint at strong performance and earnings growth in the years ahead. The following comments from the fiscal first-quarter 2018 earnings conference call and an analyst conference in New York share three key things Tyson Foods management wants investors to know. 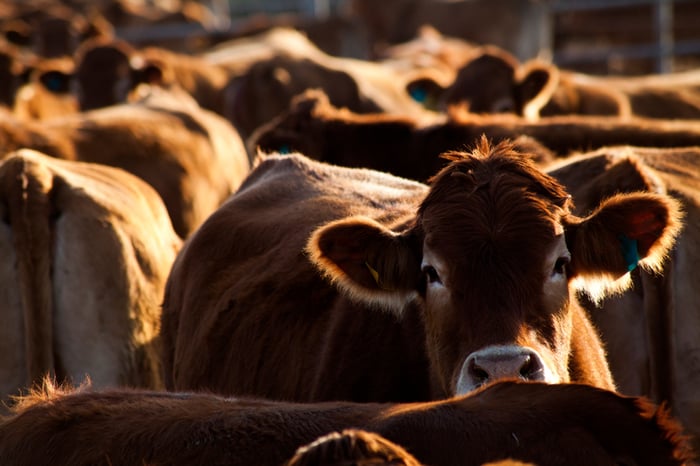 1. Protein demand is soaring -- and that's good for business

The last two years have included the most profitable quarterly periods in the 83-year history of Tyson Foods. President and CEO Thomas Hayes made that abundantly clear on the fiscal first-quarter 2018 earnings conference call:

Building our momentum from a record year in fiscal 2017, we're off to a strong start in fiscal 2018. We delivered solid results in all of our segments -- beef, pork, chicken, prepared foods -- and our retail and food service sales are outpacing the industry. This was our second strongest quarter of operating income in the company history behind only the same period of last year. We also delivered record adjusted earnings of $1.81 per share. That includes a $0.21 benefit from a recent tax legislation. But even without it, EPS still would have been at an all-time high.

While management has done its part to deliver improved performance across the portfolio -- including an expected $200 million in cost savings for fiscal 2018 -- there's an external catalyst driving the business: rising global demand for protein. Hayes explained further in remarks at the Consumer Analyst Group of New York conference at the end of February:

So over the last 60 years, protein [consumption] has been growing globally at 3% or more, and it is in the U.S. more. And for the next 60 years it will be the same thing. At least for the next 25 years, we know that protein is going to continue to be a pure growth market and a tailwind for Tyson Foods.

There's no reason to doubt that. As the population of the global middle class continues to rise -- especially in China, an important export market for the company's beef -- the world's per capita meat consumption will continue to increase. 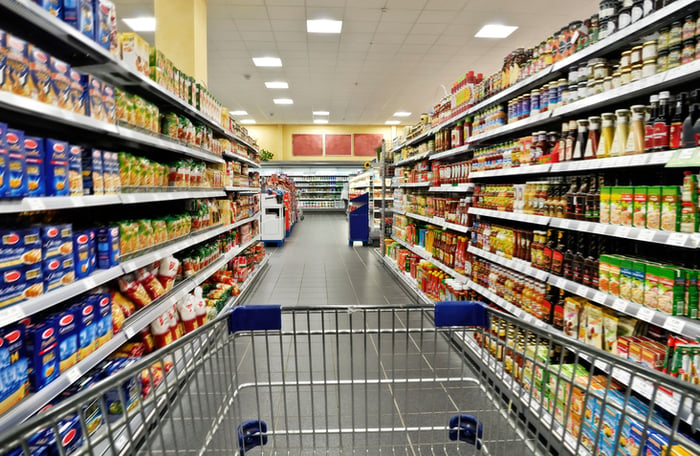 Tyson Foods accounts for 23% of all beef production in the United States, 17% of pork, and 21% of chicken. Favorable market conditions have driven higher-than-normal margins for each of those business segments in recent quarters. In the fiscal first quarter of 2018, beef sales enjoyed an operating margin of 6.6%, pork achieved 11.8%, and chicken delivered 9.1%.

Although the company's performance for its three core segments should remain strong for the foreseeable future, shareholders should remember that these margins are historically high. Good thing Tyson Foods has carefully curated its presence in the prepared foods market. The segment, led by group president Sally Grimes, puts up predictable double-digit margins each and every year now. And it's just embarking on a new growth strategy.

Grimes is leading the charge to modernize today's $1 billion brands (including household names such as Jimmy Dean and Hillshire Farm), create the iconic brands of tomorrow (including plant-based proteins), and change the industry with robust growth profiles that are uncommon by historical standards. As Grimes told the audience at Consumer Analyst Group of New York conference:

Prepared foods is over an $8 billion value-added food business, growing volume double digits and expanding operating income percentage. Just four years ago, this was a $3.3 billion business with 3% margins that generated about 7% of Tyson's EBIT. Today's it's over 25% of total Tyson EBIT. So prepared foods is helping transform total Tyson through the stability and higher-margin profile of this brand-centered, value-added business.

So far so good, but things are just getting started. Tyson Foods' size allows it to literally move markets when it decides to root out the use of antibiotics in its supply chain (part of modernizing its blockbuster brands) or move into exciting new fields such as clean meat (real meat grown with cellular technologies instead of animals that may one day reduce energy consumption, greenhouse gas emissions, water demand, and land use of protein production by over 90% each).

By now, investors are likely aware that companies across the United States are expecting significant benefits from the new tax laws going into effect in 2018. Tyson Foods is no different, although there's a bit more nuance for its shareholders to consider.

The company's adjusted effective tax rate will drop to 24% in fiscal 2018, down from 34% in fiscal 2017. That will create incremental cash flow of $300 million. One-third of that was already distributed to employees, while the remainder will be divided up between share repurchases, dividend increases, and growth investments.

Relative to the tax rates, because of the timing of tax reform, we pick up three quarters of benefit this year. We pick up four quarters next year. There is a bit of an oddity in that the tax rate goes up next year for us, and that is simply because while the federal rate is coming down, we do get a domestic production credit, which exists in fiscal 2018, which is not there in 2019. And so that takes us back by a few percentage points in 2019.

Tyson Foods' fiscal first quarter ends on the last day of December, which is why its fiscal 2018 only includes three quarters of operations with the new tax law. It all evens out eventually, but a domestic production tax credit that expires in January 2019 will actually increase the company's effective tax rate to an expected 25% in fiscal 2019. That's still much lower than the 34% rate from recent years, but investors shouldn't be caught off guard by rising rates.

Although Tyson Foods is now valued at $27 billion, by far the highest market cap in the company's history, don't make the mistake of thinking the share price has peaked. The CEO has brought a new perspective to the food producer's long-term strategy that is as forward-thinking as it is refreshing. After all, when the country's largest food company invests in plant-based proteins and makes investments in animal-free meat production, and even openly admits such technologies are the future of protein, investors can be assured that "business as usual" isn't the operating mantra at HQ. With the stock trading at a historically cheap valuation, forward-thinking investors should feel comfortable picking up shares for their portfolios.