Take-Two Interactive (NASDAQ:TTWO) shares lost 11.7% in February, according to data provided by S&P Global Market Intelligence. The stock hit a new all-time high in January and then sold off following the company's announcement that one of its key upcoming releases would be delayed.

Take-Two reported first-quarter results on Feb. 7, delivering sales and earnings that topped the average analyst estimates. However, the solid earnings performance arrived following news that the company's marquee 2018 release was once again being pushed back. Red Dead Redemption 2 was originally slated to launch in the fall of 2017; it was later delayed to a spring 2018 window and is now set to launch Oct. 28. 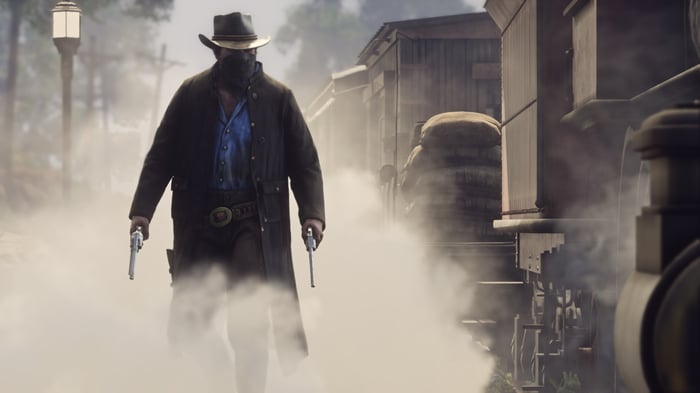 As long as the latest delay for Red Dead isn't indicative of quality issues with the game, it isn't particularly worrying from an investor standpoint. The possibility that that game's release was postponed due to serious development issues can't be entirely discounted, but Take-Two has a long history of game delays -- and most of the affected titles have gone on to be hits.

Take-Two also has another major, currently unannounced, game set to be released before March 31. It's possible that the Red Dead delay will also push that unannounced game's release back, but other than that, the postponement probably isn't a huge deal. The delay might actually keep players focused and spending on Grand Theft Auto V's online mode -- a huge performance driver in recent years and one the company is focused on sustaining.

From a broader vantage, Take-Two looks poised to continue benefiting from the growth of digital game downloads and in-game purchases. The company is also ramping up its development pipeline, aiming to release at least one blockbuster game per year, and working to increase its presence in the mobile space, so it appears to have a promising runway for long-term growth.