The supermarket chain may not be the best partner for the clothing retailer.

Kohl's (KSS 5.56%) can't fully use all of the space its stores offer, so in January, it unveiled a plan to divvy up space and rent out the underutilized square footage to grocery stores. During its fourth-quarter earnings call with analysts earlier this month, it was revealed that discount supermarket chain Aldi would be the first tenant under this new plan. Kohl's might be excited about its "big idea," but I'm not sure this tenant choice is the best one.

There is some merit to Kohl's plan in that not only can the retailer recoup some money from the leases, but the tenants might also bring in new customers, too, as supermarkets tend to be high-traffic stores. Yet unlike shopping at Target or Walmart, where you can pick up groceries at the same time you're buying clothes and household items, Kohl's is walling off its stores from the supermarkets, giving them a separate entrance to use, meaning a customer will have to go through the checkout process twice, arguably customers' least favorite aspect of shopping. And by partnering with Aldi, Kohl's may be missing an opportunity. 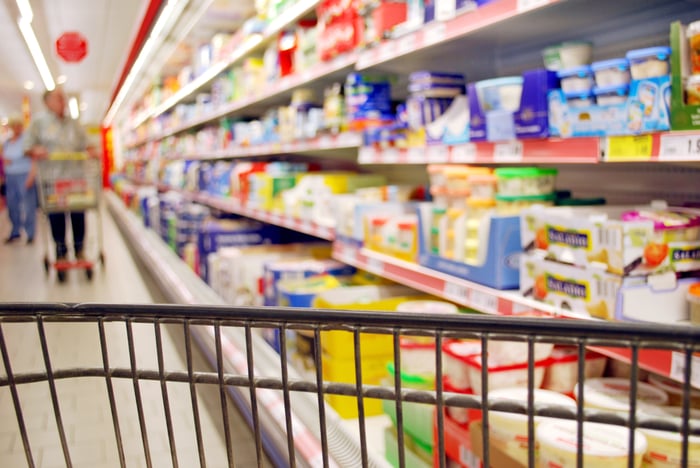 The discount grocer will be piloting a five- or ten-store test to see if the program has merit. Kohl's certainly thinks it does, because although it originally said it envisioned 300 stores being shrunk down, it now sees 500 stores being downsized by the end of the year.

The problem with choosing Aldi as a partner is that the customers of the two companies don't really line up as well as they might appear at first glance.

There's no doubt Aldi's is a fast-growing chain. Last summer, the discount grocer said it would invest $3.4 billion to expand its U.S. store base to 2,500 by 2022, some 900 more than it had at the time, an expansion plan that would make it the third-largest supermarket chain behind Walmart and Kroger.

On the surface, that could be a big draw for Kohl's, as Aldi says it's looking to service 100 million customers a month.

According to Kantar Retail's ShopperScape, the household earnings of the average Kohl's shopper is $69,442 annually, slightly more than that of Target customers, and almost 30% of them live in households with annual incomes of $100,000 or more. This average customer also happens to be mostly between the age of 35 to 54.

Aldi also can appeal to those types of customers -- it is, after all, the parent of Trader Joe's, the upscale-though-affordable grocery store chain -- and in the U.K., it's estimated 31% of Aldi shoppers are from upper or middle income. But Kantar finds that in the U.S., the store's primary customer is someone earning $50,000 or less.

The grocery store customer shopping at Aldi is someone concerned predominantly with price, perhaps even more so than the consumer who shops at Walmart. The Aldi customer is willing to accept a limited range of products and selection and doesn't care about brand or service since they have to bag their own groceries at checkout. Aldi's shoppers can be millennials, but it also has the largest share of seniors who shop its stores, whereas Kohl's has substantially fewer.

The wrong kind of tenant

Supermarkets also might not be the best tenants for Kohl's. Like the retail industry generally, supermarkets are overstored. The Wall Street Journal cites data from CoStar Group showing the U.S. has 30 times more retail food space per person than it did in 1950, even though grocery shopping is continuously moving online. The Food Marketing Institute and Nielsen forecast that within five to seven years, 70% of consumers will be shopping for food online.

To its credit, Kohl's has said that although it is starting with supermarkets, the carving up of its stores won't be limited to only that type of business. That's a good thing, because Aldi's may not be able to help Kohl's grow.