The Walt Disney Company (NYSE:DIS) sent a powerful message to CEO Bob Iger this month by rejecting the executive compensation plan laid out for him and other C-suite executives. Preliminary results found 52% of shareholders voted against Disney's plan while 44% voted in favor (4% abstained from the vote).

While this is certainly not the outcome Iger and the rest of the C-suite would have wanted, it's important that the vote was non-binding (read: Iger and executives will most likely retain the current package). The board's compensation chair, Aylwin Lewis, released a statement [emphasis mine]: "The board accepts the result of today's non-binding vote and will take it under advisement for future CEO compensation." 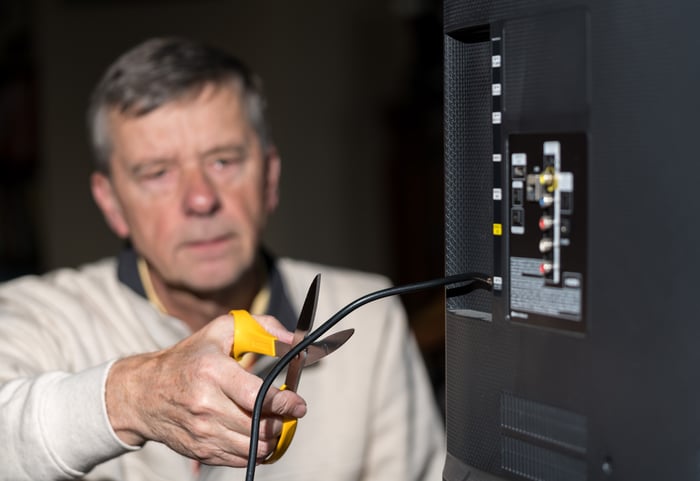 Cord-cutting is at the root of Disney's problems. Image source: Getty Images.

Are investors being short-sighted?

Wall Street has always been a myopic bunch, but this broadside against Iger seems particularly misguided. Iger's brilliant acquisitions of Pixar in 2006, Marvel in 2009, and Lucasfilm in 2012 have turbocharged the company's film studio division. Since 2013 the studio has grown from approximately 6% of total operating income to 16% by growing this figure 37% per year. Looking over Iger's full tenure, you can see the CEO has trounced the greater S&P 500: 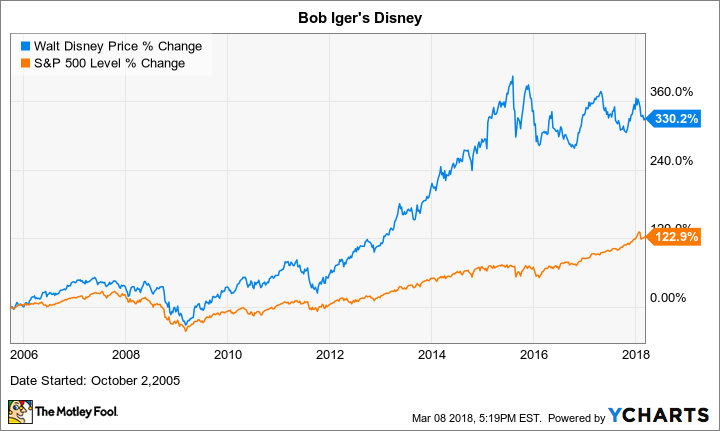 However, if shareholders do have a legitimate criticism of Iger, it's likely the failure -- or unwillingness -- to accept the rapidly changing environment for the company's media networks division. For the last three years, the stock has been stuck in neutral as the S&P 500 has advanced by 32%.

As is often the case, Disney's biggest strength has become its greatest weakness. More recently the media networks division -- its largest -- has suffered amid cord-cutting and struggles from its crown jewel ESPN family of networks. At a monthly cost of more than $9, the sports-themed networks have seen its subscriber count recently drop, prompting year-over-year declines from the division and sluggish financial results.

Iger will not become Eisner, but management is on the clock

In a way, this vote harkens to a dark chapter in Disney's history. In 2004, then CEO Michael Eisner was unceremoniously stripped of his role of board chairman after 43% of shareholders opposed his re-election. He retained the CEO role, but soon thereafter left the company, paving the way for Iger to step in.

Eisner has been partially vindicated in recent years -- after all, it was Eisner who purchased ESPN in 1995, although it appears unwittingly so as the deal was mostly for ABC. It's unlikely Iger will share Eisner's fate, although this vote does point to potential unrest from Disney's shareholders. Disney has taken initial steps to compete in an unbundled-cable world, but it's likely to be a volatile period with many failures in the short term.

It's hard for me, or nearly any American, to argue for a multi-million dollar pay package when the median household income is $59,000, but to act as if Iger hasn't been a legendary and transformative corporate executive is a folly. However, this is a clear sign that management is on the clock to solve the cord-cutting problem and its planned streaming services need to be a company focus -- not a side project.