Salesforce (NYSE:CRM) reported another quarter of record financial results last week, including annual revenue of $10.5 billion and a soaring backlog of customer orders.

Looking ahead, management expects to double its revenue to $20 billion by 2022. Here's why that looks less like pie in the sky, and more like an achievable target after this impressive quarter.

Two key metrics investors will want to follow as Salesforce aims toward $20 billion in revenue are "deferred revenue" and "unbilled deferred revenue." The former refers to payments from customers where the work hasn't been completed yet. The latter refers to work that is contracted but unbilled and therefore does not yet qualify as deferred revenue. Keep in mind the latter is a non-GAAP measurement that Salesforce discloses to provide visibility into future sales. These two categories of deferred revenue are often referred to in tandem as "backlog." And management was abuzz about the company's growing backlog on the 2018 fourth-quarter earnings call.

When combined, this backlog figure implies that Salesforce has visibility into $20.4 billion in future revenue as shown in the far right column below.

Management addressed deferred revenue a dozen times on the conference call, with president and CFO Mark Hawkins noting the significant uptick was largely due to the "expanded and deeper relationships that the customers are driving." A deeper relationship means customers are becoming more engaged with Salesforce's ecosystem of products, which means their switching costs -- a key indicator of an "economic moat" for Salesforce -- will get higher as well. It's also a good sign for Salesforce's costs because it's cheaper to upsell an existing customer than acquire a new one.

2. Doubling down on big customers

Building on the statement above, management discussed some of the key industries it focuses on and how Salesforce was capturing the big brand-name players in each. The following slide from Salesforce's presentation shows eight major global industries Salesforce is pursuing. As shown, the company claims it is working with 55% or more of the largest corporations in each of these business verticals: 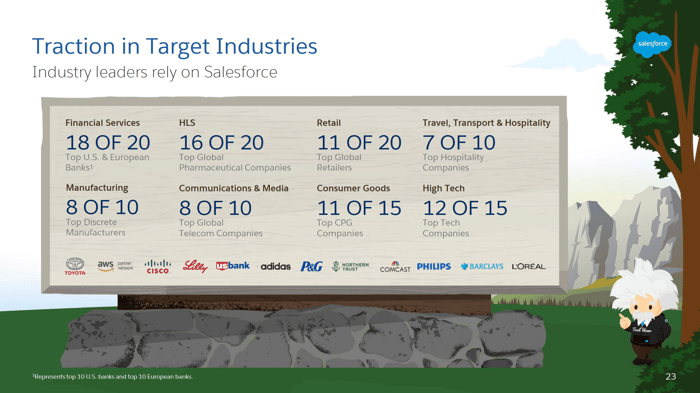 This is important because it shows Salesforce is competing well with the likes of enterprise players that include SAP, Oracle, and Microsoft. Salesforce is small in terms of revenue when compared to those companies, but it's still three times larger than the No. 2 pure-play cloud company.

Salesforce can go after the big fish and reel them in, too. As vice chairman Keith G. Block noted, this recent year witnessed Salesforce "doubling the number of $20 million relationships" it has versus 2017.

From a technology perspective, the latest conference call was all about the artificial intelligence (AI) platform Salesforce refers to as "Einstein." It (or he? hmmm ...) was referenced 17 times, and Block stated that there are a "billion interactions and insights that are provided on a daily basis" through the platform. When pressed by analysts on how the company would monetize Einstein over time, CEO Marc Benioff provided some clarity on how the product is used: It allows Salesforce to be "differentiated" from the competition and to provide a tool aimed at "enhancing human performance." For now, it's a way to make customers better and ideally improve their retention.

Going forward, Einstein will have implications across each of Salesforce's cloud offerings, but it could prove particularly fruitful in the area Salesforce refers to as Analytics. The most recent data from industry research firm Gartner shows this category to be Salesforce's second-largest market vertical opportunity. Analytics opens up a window to a $14 billion industry, of which Salesforce has less than 1% of the market share. By comparison, Salesforce has anywhere between a 4% and 38% share in the other five markets it is pursuing.

Overall, management said steady corporate spending and tax cuts provided a tailwind as companies were more willing to open their wallets. Salesforce was prepared to capitalize on this trend by securing big clients and widening the customer relationships at the same time. This led to the substantial backlog, which puts Salesforce in a solid position as it aims to double its revenue.