The pace of initial public offerings has slowed in recent years, as companies have found ample sources of capital without having to comply with the often frustrating regulations and requirements involved in being a publicly traded company. Publix Super Markets, Inc. has been one of the 10 largest private companies in the U.S., and those who live in the southern part of the country know very well about the Florida-based grocery store chain. With almost 1,200 stores in the Southeastern U.S., Publix is approaching the centennial of its founding, and some believe that the company might be poised to go public at some point in the not-too-distant future to go up against industry giants such as Kroger.

One unusual thing about Publix is that although it's a private company, its employees have access to shares through an employee stock purchase plan. As such, Publix reveals decisions about when to do stock splits. Publix has indeed split its shares on several occasions in the past, and what it's said about its stock price gives a sense of how the company has grown over time. Let's look more closely at Publix Super Markets' stock split history and what it means for those who expect an IPO in the near future.

Here are the dates and split ratios for the stock splits that Publix Super Markets' has done in the past:

Publix Super Markets hasn't done a lot of stock splits, but when it does, it doesn't waste time with minor moves. Any longtime employees with half a century of experience under their belts would have seen every single share of Publix stock they owned at the end of 1968 turn into 1,000 shares today.

Employees and members of the board of directors are the only people eligible to purchase Publix shares currently, and even for them, access is controlled. Workers can become part of the employee stock purchase plan after being employed for a full year, and there are limits on the amount of stock that employees can purchase based on the length of tenure they have with the supermarket chain. 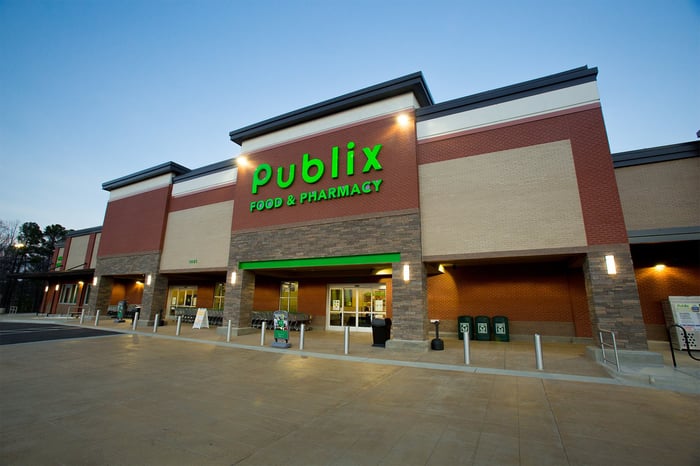 Moreover, the Publix stock that employees own is subject to substantial restrictions. The purchase must be a long-term investment, and if someone sells shares, there are new limitations put in place thereafter to prevent short-term trading.

What's next for Publix?

With respect to stock splits, Publix doesn't look likely to give employees a new split in the near future. The stock has climbed from the low $20s in late 2012 to $41.40 per share at its latest valuation date, but before its 2006 split, Publix allowed the stock to climb above $85 per share. That leaves plenty of time before investors can expect another move from the company.

As for going public, there's been speculation for years that Publix might look to tap the capital markets. Yet nothing has ever come from those rumors. The surviving family members of deceased founder George Jenkins still have substantial stakes in the company, but a roughly 2% dividend yield offers plenty of income to help them sustain their finances. Only if the employees or the trustees of the company's 401(k) plan decided that a sale of stock was somehow in the best interest of participants would an IPO be likely to gain traction.

With strong competition in the grocery store industry, Publix Super Markets has done a good job of carving out a successful niche in the southeastern corner of the nation. Unless something dramatic happens, employees are the only ones who'll benefit from Publix's next stock split -- even if it happens years into the future.