Due to one external boon, February could have been a positive month for Whirlpool stock. On Jan. 22, the Trump administration announced trade tariffs which included a 20% tariff on the first 1.2 million washing machines imported into the U.S., and a 50% tariff on all subsequent imported washers. This action will positively benefit Whirlpool's U.S. sales, although it's too early to quantify the financial impact. Shares subsequently rose 11% over the next few trading sessions, a week in which Whirlpool also issued fourth-quarter 2017 earnings.

Though it took a few days after Whirlpool's Jan. 24 earnings release to dampen tariff-influenced buying enthusiasm, investors eventually cooled on the results. Fourth-quarter net sales of $5.7 billion topped the prior-year quarter by only one percent, and after adjusting for foreign currency effects, the top line actually decreased by 1.6%. 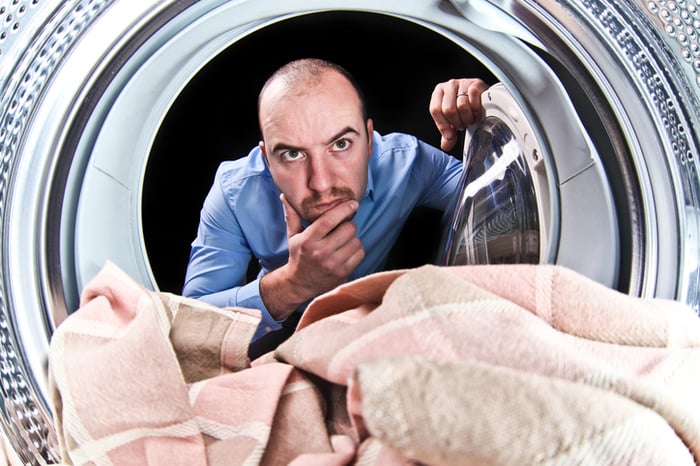 Caution around gross margin may inform the current conservative earnings forecast. While management stated a goal of increasing EBIT (earnings before interest and taxes) margin in 2018, pressures on cost of goods sold may complicate the push.

During the fourth quarter, rising commodity costs cut into gross margin in each of the company's geographical segments. The bite was most pronounced within the non-North American divisions: Asia, Latin America, and EMEA (Europe, Middle East, and Africa). For example, raw-materials inflation more than offset productivity improvements in the EMEA business, causing segment operating profit to drop from $45 million in Q4 2016 to just $4 million in the recently concluded quarter.

Investors may remain wary of Whirlpool until benefits from import tariffs materialize later this year. For now, a tepid top line and the prospect of climbing commodity inputs are creating pessimism over the company's earnings momentum in 2018.