3D Systems Corporation (NYSE:DDD) reported fourth-quarter and full-year 2017 results on Wednesday after the market close. For the quarter, the 3D printing company posted year-over-year revenue growth of 6.9%, a loss of $0.08 per share on a GAAP basis compared with earnings per share (EPS) of $0.05 in the year-ago period, and adjusted EPS of $0.05, down from $0.15.

Shares of 3D Systems were up 7.3% on Thursday, as of 2:56 p.m. EST. We can attribute the market's reaction to the company's adjusted EPS coming in at the high end and its GAAP loss per share coming in at the low end of the respective expected ranges the company provided when it released preliminary results on March 1.

Earnings releases generally don't provide much information beyond the numbers, but a wealth of color about a company's performance and future prospects is often shared during the quarterly analyst conference calls. Here are three key things you should know about from 3D Systems' Q4 call. 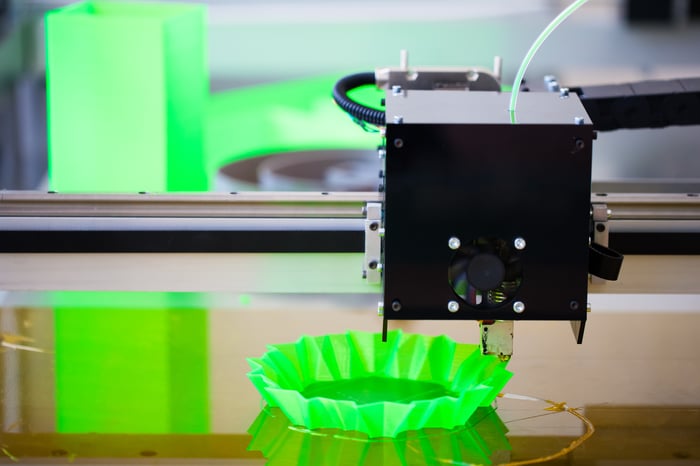 3D Systems' quarterly revenue from 3D printer sales was $34.9 million, accounting for 19.7% of total revenue of $177.3 million. Sales of 3D printers, however, are more important than this percentage suggests, because they're central to the company's razor-and-blade-like business model: They're the "razors" that drive sales of the high-margin print materials, or "blades." Rival Stratasys employs a similar strategy, which is why both companies remain focused on growing their total installed base.

Management specified the change in production 3D printers vs. professional 3D printers for the year because customers generally use the former more -- "significantly more," as CEO Vyomesh Joshi has previously said -- which means sales of these printers have an outsize effect on sales of materials. (3D Systems considers its "production" machines to be its plastics 3D printers that are powered by stereolithography (SLA) and selective laser sintering (SLS) technologies, its direct metal printers (DMP), and its recently launched Figure 4 printing system, which is discussed more below.)

As we showcased in November, we plan to introduce [in 2018] several products to enable customers to seamlessly scale from prototyping to production and bridge the gap between traditional and additive manufacturing. We plan to launch next-generation production system with our Figure 4, DLP, SLS, and metal technologies, as well as a range of materials, software, and services, to help our customers integrate 3D printing into their manufacturing workflow.

As with Figure 4 and SLS, Digital Light Processing (DLP) is a technology for printing plastics.

Figure 4 is an extremely important -- perhaps even make-or-break -- technology for 3D Systems, so investors should pay close attention to how well systems sell that are based on this tech. On the first-quarter 2017 earnings call, Joshi said the company expects Figure 4 to be a "significant" catalyst for growth in 2018, and he's since reiterated  this belief.

Figure 4 is a robotic, scalable, stereolithography (SLA) 3D printing system designed for the production of plastic parts. It's a twist on the company's conventional SLA technology, but much speedier, and is targeted at the production of small parts. Last March, the company shipped one Figure 4 system to an unnamed "Fortune 50 industrial customer." Apparently, no revenue was generated from this transaction, so this was likely a system that's "in beta" or being tested by the "customer."

3D Systems' healthcare business spans both its product and service segments, and includes such products as 3D printers, materials, and software. It also provides services such as anatomical modeling for surgical planning. In the fourth quarter, the healthcare business -- which generated revenue of $50.4 million, as McMullen noted -- accounted for 28.4% of 3D Systems' total quarterly revenue of $177.3 million. Since it's a sizable business, it's good news to hear that management expects the double-digit revenue growth to continue.

This is particularly true because 3D Systems acquired a company that makes dental materials in the first quarter of 2017, which provided a boost to its healthcare revenue in 2017. In other words, year-over-year organic revenue growth -- which excludes the acquisition -- is less than the figures McMullen provided for the quarter and year.