While many view market leader Alibaba (NYSE:BABA) as the Amazon (NASDAQ:AMZN) of China, JD.com (NASDAQ:JD) may be a closer comparison. Unlike Alibaba, which began as a platform upon which third parties bought and sold goods, JD.com began as a full-service e-commerce platform, buying up its own inventory, and investing heavily in its own logistics and delivery system.

That explains the wide gap in profitability between the two companies; Alibaba recently reported 31% operating margins last quarter (down from 39% from a year ago), while JD.com had operating margins of -0.5% in the recent quarter.

While its revenue growth has remained impressive, JD.com stock sold off after the release, largely due to this ongoing lack of profitability. However, I think the market is perhaps being shortsighted, as much of the earnings miss can be attributed to heavy investments in fulfillment centers and technology. That will not only keep JD out ahead of rivals but should also lower its costs in the future. Here are all the ways in which JD is aiming to keep its lead in Chinese e-commerce. 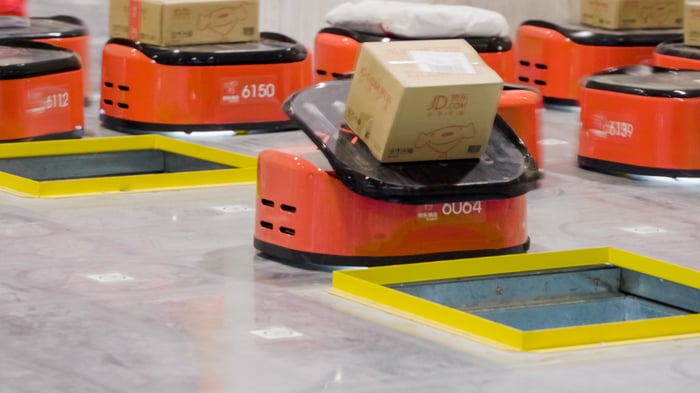 The numbers from the quarter reveal the toll of these heavy investments. While JD reported impressive 38.7% revenue growth and 29.1% growth in active customers, these numbers lagged huge increases in both fulfillment expenses and technology investments, which rose 45.7% and 74.5%, respectively.

That sent margins into negative territory, in contrast to the slight profit the company made in the third quarter. Management clarified that the better-than-expected margins of the first three quarters in 2017 allowed the company to spend on new warehouses and logistics in the fourth quarter, along with big customer discounts in an effort to drive volume and take market share. As of the end of last year, JD had seven major fulfillment centers and a whopping 486 warehouses across China.

The fixed costs of warehouses and fulfillment centers create more profit as more volume flows through them, so JD's management is making a bet on bigger (and therefore, more profitable) growth in the future -- a process that it expects to play out over multiple quarters.

In addition to investments in land and buildings, management invested heavily in technologies to make this extensive delivery system among the most sophisticated and efficient in the world. These investments include futuristic-sounding innovations on multiple fronts.

First, the company unveiled its first fully automated warehouse in Shanghai. If successful, it could apply the technology to its near 500 warehouses across the country. That would undoubtedly lead to huge future savings in labor costs.

Second, the company expects to receive more delivery-by-drone licenses in 10 provinces by the end of this year. JD began delivering via drone about a year ago in rural areas outside Beijing, and says it will add many more delivery robots "in the near future." Drones have been mentioned as a key element in JD's ambitions to reach more rural populations, and these rural provinces have been much more open to drones filling their skies than their U.S. counterparts. While Amazon has also revealed ambitions for delivery-by-drone, it seems as if JD has beaten Amazon to the punch due to its more inviting regulatory environment.

Finally, management also revealed it had been testing self-driving trucks for the past six months. Self-driving ridesharing apps for consumers are almost here,  but one of the more useful cases for self-driving tech could be in trucking and shipping, and it looks as if JD has already been seriously investing on that front.

This combination of automated warehouses, delivery drones, and self-driving trucks could make for quite a formidable delivery system that is not easily replicated, even by its giant rival. Alibaba still commands a majority of e-commerce in China, but JD.com has gained ground in recent years.  Alibaba also recently acquired its logistics joint venture, Cainiao, in a seeming admission that having its own logistics capabilities will be key to its future.

It appears that JD has the technological lead, at least at the moment. If you believe the same, now may be a good time to scoop up some JD shares at a post-earnings discount.