There's a whole class of temporary business problems that reflect not the troubles of an organization, but its competitive strengths.

I was reminded of this last week when reading through the results of the largest natural-foods distributor in North America, United Natural Foods, Inc. (NYSE:UNFI). The company released its second-quarter fiscal 2018 earnings report on March 8, which covered the three months ended Jan. 27, 2018. Revenue expanded 10.6% during the quarter to $2.3 billion, in line with a compounded annual growth rate (CAGR) of nearly 11%, which the company has achieved over the last three fiscal years. Executives confidently predict that 2018 will mark the first year in which annual revenue exceeds $10 billion.

Yet United Natural Foods failed to capture all sales available to it during the quarter. CEO Steven Spinner discussed an issue with United Natural's top line on the company's earnings conference call:

Service levels continued to be challenged during the quarter. Supplier out-of-stocks in the second quarter of fiscal 2018 were approximately 250 basis points unfavorable versus the same quarter in the prior year, equating to approximately $50 million in lost sales.

We continue to work across supply-chain teams closely with our suppliers, to ensure that we are aligned on the demand signals, and improve service level going forward.

This occurrence of out-of-stock items among suppliers comes on top of $25 million in lost sales due to out-of-stocks in the first quarter of the fiscal year. While $75 million of foregone opportunity isn't monstrous for United Natural Foods, it still represents about 1.5% of year-to-date sales of nearly $5 billion. Demand left unfulfilled is never fun to calculate, and it's typically a problem of missed execution.

But among possible problems, this is a good one to have. At the moment, United Natural Foods' resources are stretched to provide enough product to the natural foods and conventional grocers it counts as end users. And United Natural struggles from time to time to align readily available product within its supply network with marketplace demand, as Spinner suggests above. The upside? Both issues stem from unabated growth. 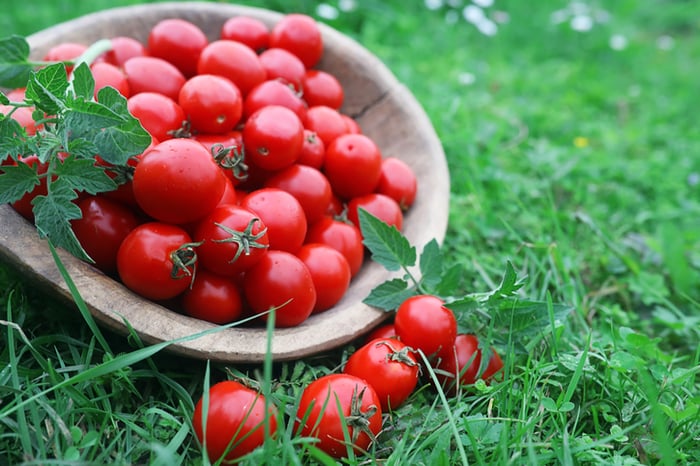 Positive initial results on a new twist to an old partnership

Supply constraints are one sign that United Natural Foods is enjoying a lift from the purchase of its largest customer, Whole Foods Market, by Amazon.com (NASDAQ:AMZN) last year. Whole Foods remains by far United Natural's largest buyer, responsible for 33% of total revenue in 2017. United Natural's relationship with Whole Foods goes back decades, and its current distribution with the natural and organic grocer runs through September of 2025.

As you might expect, while Amazon's broadening of Whole Foods' discounts and promotions is reflected in United Natural's top line, we can deduce that Amazon is likely to wring more price concessions from the distributor over the long term. Year to date, gross margin has decreased a slight 39 basis points to 14.8%. The company attributes the drop to sales mix within its customer base, as well as higher shipping costs. Thus, for now, significant margin pressure from Amazon hasn't materialized on United Natural's books.

With its margin relatively safe for now, United Natural can focus on the execution I mentioned above. Over the years, as it's serviced not only Whole Foods but also a growing book of other natural and organic food retailers (a group United Natural charmingly refers to as "supernatural" grocers), it has made a plethora of manufacturer, supplier, and distributor acquisitions. According to its most recent annual report, the company has completed nineteen such acquisitions since 2000. And yet, United Natural Foods hasn't overborrowed to add this capacity. The company's total long-term debt of $156.1 million (as of its most recent quarter end) comprises just a fraction of current working capital of more than $1.1 billion.

Prepping to meet demand in fiscal 2018

During the earnings conference call, Spinner addressed capacity issues, noting that the company saw a bit of recovery during the second quarter as most distribution centers adjusted to higher demand. Management intends to further address capacity shortcomings with capital investment in fiscal 2018, by leasing space contiguous to existing manufacturing and distribution locations.

It's clear that United Natural's double-digit growth is being propelled by a growing customer base within a briskly expanding sector of the grocery industry. Now the company just needs to solve "good" problems, such as executing to capture that last 1.5% of available revenue during a given quarter.