Shares of Del Taco Restaurants (NASDAQ:TACO) have plunged today, down by 12% as of 2:15 p.m. EDT, after the company reported fourth-quarter earnings. The taco chain also announced a new "Elevated Combined Solutions" strategy.

Revenue in the fourth quarter was $146.5 million, and systemwide comparable-store sales grew 2.4% while company-operated comparable-store sales increased 2.1%. Adjusted net income came in at $6.1 million, or $0.15 per share, and adjusted EBITDA was $23.3 million. Del Taco opened 10 restaurants during the quarter, including nine company-operated locations and one franchised restaurant. 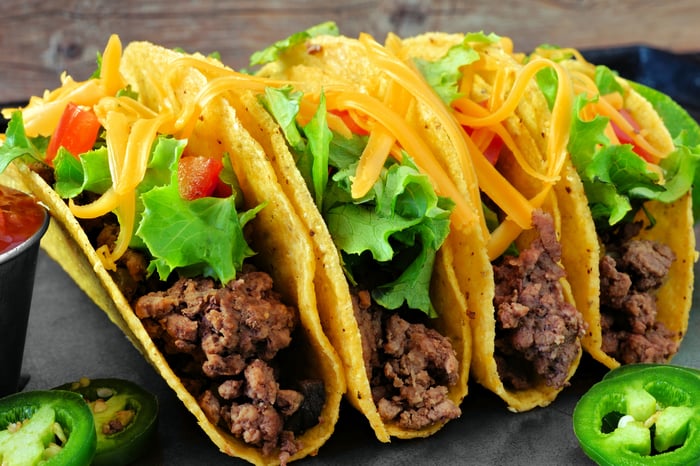 Elevated Combined Solutions will include "a series of brand catalysts and operational improvements," CEO John Cappasola, Jr. said in a statement. The strategy will also incorporate a new advertising campaign, new products, a new mobile app, and other enhancements focused on hospitality at Del Taco restaurants.

In terms of guidance for 2018, Del Taco expects systemwide same-store sales to grow 2% to 4%, with revenue of $506 million to $516 million, including the impact of new revenue recognition rules regarding franchise advertising contributions and franchise revenue. Adjusted earnings per share for the year should be $0.59 to $0.63, the midpoint of which is $0.01 shy of the $0.62 per share in adjusted profit that analysts were expecting.