Thursday saw a mixed session for the stock market, with the Dow outperforming broader-based measures like the S&P 500 and Nasdaq Composite. With market participants largely in a lull between earnings seasons, most investors' attention was on geopolitical and macroeconomic concerns. Potential talks between the leaders of the U.S. and North Korea, as well as the possibilities of more serious trade disputes between the U.S. and China, played key roles in keeping the market somewhat on edge. Yet good news from some individual companies helped produce meaningful gains. Noodles & Co. (NASDAQ:NDLS), Blue Apron Holdings (NYSE:APRN), and Adaptimmune Therapeutics (NASDAQ:ADAP) were among the best performers on the day. Here's why they did so well.

Investors fill up on Noodles

Shares of Noodles & Co. soared 12% after the fast-casual restaurant chain announced its fourth-quarter financial results. The company said that revenue fell 13% due largely to the closure of 55 restaurants earlier in 2017, but net losses narrowed to just $0.01 per share, and Noodles made a profit on an adjusted basis. Comparable-restaurant sales were down 0.9%, but investors were pleased at the progress that the noodle specialist has made in turning itself around. Company executives expect more positive impacts in 2018, and with some investors looking for shifting consumer preferences to bring its cuisine back into favor, Noodles could build on the day's gains. 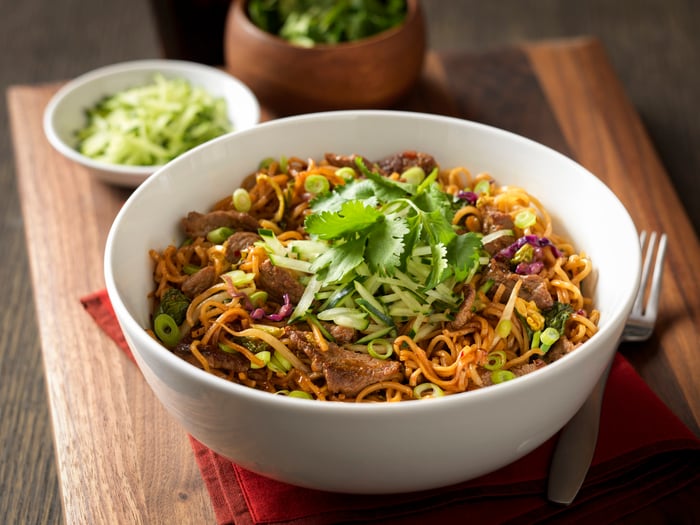 Blue Apron heads to the supermarket

Blue Apron Holdings stock rose almost 1.5% in the wake of the meal-kit specialist's decision to start selling its products in conventional grocery stores. The company began with the idea that its core customer base would want the convenience of home delivery, but today's announcement shows that Blue Apron also sees appeal in serving customers who still want to visit physical store locations to get their food. With dramatic competition from giants in the industry looming, Blue Apron's move was likely a necessary strategic decision in order to keep it relevant in the niche food space, but it remains to be seen whether it will be enough to sustain bullish shareholders' hopes for the company's future.

Finally, shares of Adaptimmune Therapeutics skyrocketed 19%. The clinical-stage biopharmaceutical company said that there were encouraging initial responses in a study of its NY-ESO SPEAR T-cell therapy in treating a form of cancer tumor known as myxoid/round cell liposarcoma. In the words of Chief Medical Officer Rafael Amado, the data "validates the potential of our platform to treat a broad range of tumors, including those that are known to be unresponsive to current immunotherapies." With expectations for further data over the course of the coming year, Adaptimmune is becoming increasingly comfortable that its pipeline of T-cell therapies will be able to treat many different types of solid tumors, and that's important in an industry increasingly reliant on technological breakthroughs.