The Walt Disney Company (NYSE:DIS) has been having a hugely fruitful movie run in the last several years, so it shouldn't be too big of a surprise that its latest effort is wildly successful. Black Panther has taken that achievement to the next level, joining an elite collection of movies that have crossed the $1 billion box office mark.

Black Panther has become a worldwide phenomenon and a cultural talking point in the U.S. during its record-breaking run. More importantly for Disney, it continues the tradition of movie excellence the company has achieved in recent years, adding new content to the growing treasure trove of intellectual property that fuels its vast entertainment empire.

Black Panther is king of the box office for the fourth week in a row. Image source: Disney.

Of the 33 films that boast the distinction of generating more than $1 billion in ticket sales, more than half belong to Disney:

You've probably noticed that Marvel accounts for a growing number of those box office biggies, as does Star Wars. It is also important to point out that the company's other two film studios -- Pixar and Disney -- are represented as well. Not only that, but live-action remakes like Beauty and the Beast and newer animated classics like Zootopia made the list. This points to the overall strength and growing domination of the company's cinematic efforts.

The two most recent additions, Black Panther and Star Wars: The Last Jedi haven't even completed their initial theatrical runs, so those ticket sales will continue to climb.

The revenue that Disney generates from these hit movies doesn't stop when they leave the theaters. The characters from these iconic films find their way to the company's media networks and into a wide variety of consumer products, as well as provide the inspiration for rides and attractions at the company's theme parks.

Disney CEO Bob Iger alluded to this during his recent appearance at the Morgan Stanley Technology, Media and Telecom Conference. He pointed out that there's no way to know which characters or movies will resonate with fans, but that he was enthusiastic about the success and future potential for Black Panther, saying it was "an important moment in culture." His comments about the merchandising potential were even more telling. "I pretty much guarantee that this coming Halloween and even Christmas, you know you'll be seeing a lot of Black Panther merchandise." 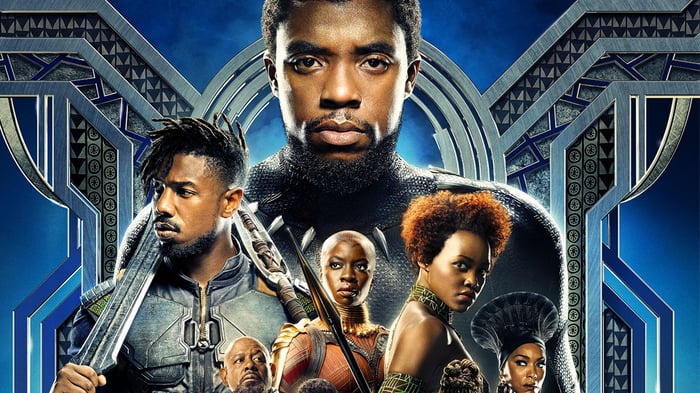 It couldn't come at a better time

In recent years, Disney's media networks segment has struggled to offset the effects of cord-cutting and subscriber declines at its flagship ESPN sports network. The company's other operating units -- parks and resorts, studio entertainment, and consumer products -- have had to step up their game in order to make up for declining profitability at Disney's largest segment.

These movie successes add up; the studio entertainment segment now accounts for 16% of Disney's profits, up from just 6% in 2013.

While investors shouldn't expect all of the company's film fare to be so wildly successful, this shows why the House of Mouse has been an institution -- and investor favorite -- for decades.