Magellan Midstream Partners (NYSE:MMP) and Spectra Energy Partners (NYSE:SEP) are very similar companies. Both are midstream master limited partnerships, or MLPs, that primarily operate pipelines, though Magellan focuses mainly on moving petroleum products, while Spectra operates gas lines. Other than that, the only notable difference between these two is that Spectra Energy Partners currently yields 7.4%, while Magellan's is a bit lower at 5.8%.

For some investors, the yield difference alone would tilt the scale toward Spectra Energy Partners. However, before we declare it the winner, we need to dig a bit deeper to see if that higher yield is a warning sign or a reason to buy. Here's a closer look at how these two pipeline companies stack up. 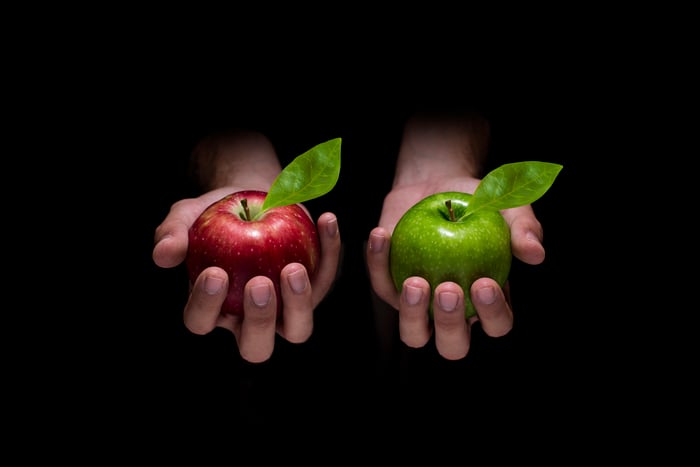 Considering the quality of their credit

One of the first places I like to look when comparing two companies is their credit metrics. As the table below shows, both have solid financials.

Magellan Midstream Partners boasts one of the highest credit ratings among MLPs, thanks to the fact that it has historically maintained a leverage ratio of less than 4.0 times, averaging under 3.5 times in recent years. That said, Spectra Energy Partners isn't too far behind, with its credit rated just one notch lower by two of the three agencies because it has a slightly higher leverage ratio. At just over 4.0 times, though, it's solid for an MLP.

A closer look at these high-yield payouts

The next thing I like to explore when comparing two income stocks is the sustainability of their respective payouts. As this table shows, both appear to back their high yields with solid metrics:

Magellan Midstream Partners and Spectra Energy Partners have a long history of steadily growing their distribution to investors, with Spectra recently announcing its 41st consecutive quarterly increase while Magellan has given its investors a raise 63 times since going public in 2001. Three factors drove this growth. First, both generate relatively steady cash flow since the bulk of their earnings come from stable sources like fee-based contracts. Second, both maintain ample excess coverage, which leaves plenty of room for error. Finally, that excess cash gives them some money to reinvest into expansion projects to grow cash flow.

In Magellan's case, it currently has $1.75 billion of fee-based growth projects under way. One of the largest is a $410 million investment to construct a marine terminal in Texas with Valero Energy (NYSE:VLO). The first phase should come on line early next year, while the second should start up in 2020, which includes a pipeline to connect it with some of Valero's refineries in the area that will enhance the refining giant's ability to access global markets. Beyond that backlog, Magellan could invest another $700 million in expanding that facility as well as in other projects in development. That growth pipeline should provide the fuel necessary to continue growing the company's payout for years to come.

Spectra, meanwhile, has $2.5 billion of growth projects in progress. The largest one is a $1.3 billion investment to build the NEXUS natural gas pipeline in the upper Midwest, which should enter service later this year. It's one of $2 billion in projects the company expects to bring on line in 2018. While Spectra Energy Partners has fewer needle-moving projects secured beyond next year, it's working on $4 billion to $9 billion in potential development opportunities to expand its gas pipeline network over the next five years, potentially providing it with ample fuel to continue increasing its distribution in the future.

This number makes all the difference

Magellan seems to have an ever-so-slight advantage over Spectra in that it has a higher credit rating and could grow its payout at a faster pace over the next three years. That said, one notable edge Spectra Energy Partners has over Magellan is a much lower valuation since it sells for less than 12 times cash flow while Magellan fetches about 14.5 times cash flow. That cheaper valuation is why Spectra Energy Partners has a higher current yield.

That valuation difference is hard to justify given how close these two are in all their other metrics. Because of that, I think the gap will narrow in the future, potentially enabling investors in Spectra Energy Partners to earn a higher total return when factoring in its fatter payout. That double dose of upside makes it the better buy versus Magellan right now in my opinion.