This past year has been an excruciating one for investors in NuStar Energy (NYSE:NS), which has tumbled nearly 60%. That deep dive has driven the pipeline and storage terminal master limited partnership's distribution yield up into the double digits. While a payout that high is usually a sign of trouble -- and it was for NuStar last year -- that no longer seems to be the case now that the company has outlined its new way forward.

One of the issues that eroded NuStar's value over the past year is that distributable cash flow took a hit, dropping from $365 million in 2016 to $258 million in 2017. That decline came even though the company spent $93 million to buy an oil and refined products storage terminal in late 2016 and paid nearly $1.5 billion to buy Navigator Energy Services last year. Instead of being a growth engine for the company, Navigator added significant weight to its financial metrics because it paid a high price to secure an asset footprint in the fast-growing Permian Basin. The dilution from that deal, when combined with headwinds from hurricanes and customers issues, resulted in the company only covering its high-yield payout with cash by 0.63 times last year. That added stress to its balance sheet because it had to borrow more money to make up the difference. 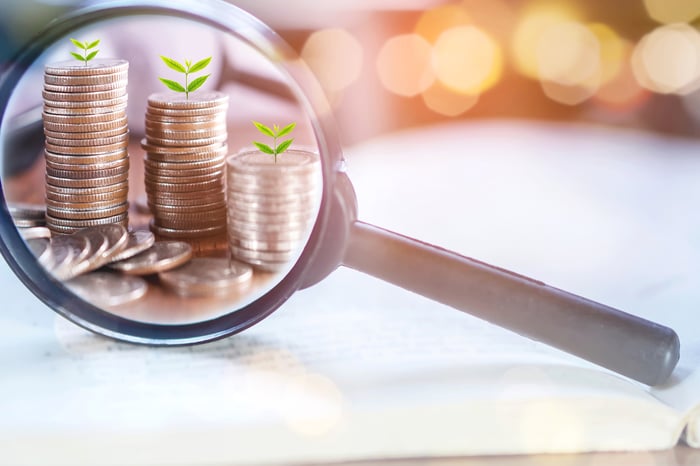 A closer inspection suggests that NuStar's payout is not only sustainable but could grow in the coming years. Image source: Getty Images.

That left it with no choice but to cut the payout this year, lowering it by 45%. Even at that lower level, though, NuStar Energy still yields more than 11%. In addition to making that tough decision to shore up its financial situation, the company also agreed to buy out general partner NuStar GP Holdings (NYSE:NSH) in a deal that will eliminate the costly management fees that had been eating into its cash flow. In announcing that deal, NuStar took the path MLP behemoth Enterprise Products Partners (NYSE:EPD) blazed eight years ago when it bought out its parent to reduce costs. That transaction has worked out well considering that Enterprise has since delivered a total return to investors approaching 100%.

NuStar Energy Partners hopes to create similar value for its investors going forward by combining with NuStar GP and resetting its payout to a more sustainable level. In fact, the company estimates that it can cover the reset rate with cash flow by 1.1 to 1.2 times this year, which is closer to the 1.2 times coverage level Enterprise maintains. Furthermore, NuStar aims to increase its coverage ratio to a range of 1.3 to 1.4 times in the future as expansion projects boost cash flow. That target also lines up well with Enterprise, which slowed its distribution growth rate last year to enhance coverage and make its payout even safer. NuStar's credit metrics should also improve, as the company anticipates leverage to fall from an elevated 4.8 times this year to a more comfortable 4.0 to 4.3 times in the future, getting it more in line with the industry leader's metrics.

These improvements should enable NuStar to more easily access the funding it needs for growth projects. Overall, it plans to invest $360 million to $390 million this year on a variety of expansions, up from an average of $313 million over the last five years, driven in part by the acquisition of Navigator. Meanwhile, it's currently evaluating $1 billion to $1.5 billion of additional investment opportunities. As these growth projects come on line and increase cash flow, they position NuStar to start growing its reset distribution as early as next year at a mid-to-high single-digit annual rate for the foreseeable future.

An interesting option for high-yield seekers

Due to a combination of factors, NuStar's lucrative distribution reached an unsustainable level last year, forcing it to reset it as well as to take other actions to get back on solid ground. However, its action plan looks promising since it should improve its financial metrics to the point where that still-lucrative payout seems sustainable and appears poised to increase off the reset base in the coming years. As a result, investors looking for a high-yield option should take a closer look at NuStar. While it's riskier than a company like Enterprise, it has a solid plan to fuel returns in the coming years.