Beer is one of the most popular beverages in the world, and holidays like St. Patrick's Day act as a reminder of the cultural importance that beer has across the globe. For London-based Diageo (NYSE:DEO), which owns the Guinness brand and has turned it into a worldwide favorite among beer drinkers, March 17 is always an important day. About 13 million pints of Guinness beer were consumed on the holiday, or about three times the ordinary run rate for the Irish stout.

Yet when you look more broadly at beer consumption throughout the year, the picture doesn't look as strong. Even with a generally successful brand like Guinness, there have been obstacles to growth that have shown up recently. As you can see, organic volume of the Irish beer brand's sales has fallen in four out of the past five years. 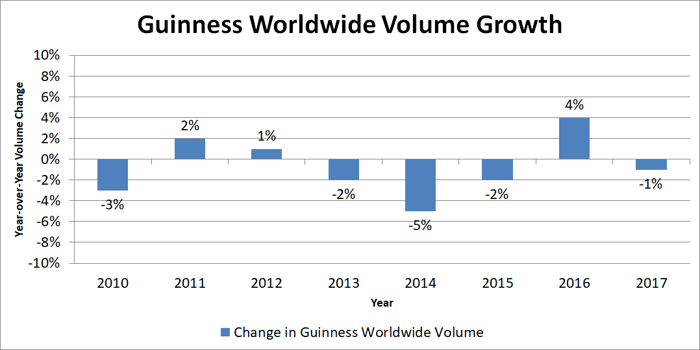 There are several factors potentially at play. One is that the rise of craft brews has disrupted the usual brand loyalty among beer drinkers, instead leading many consumers to favor a wider selection of beers. In addition, a new emphasis on spirits in the marketplace has shifted consumer tastes away from beer toward hard liquor.

Companies in the industry are responding accordingly to keep up with changing consumer trends. Diageo in particular has seen tremendous growth in spirits brands like Tanqueray gin and Crown Royal whiskey, which saw volume increases of 12% and 10%, respectively, in 2017. Beer won't disappear overnight, but its past dominance of the local tavern might slowly give way to a broader menu of adult beverages in the years to come.