Pirates are no longer haggling over the redhead at Disney's iconic boat ride, and that's good news in more ways than one.

This may seem to be an off year for Disney's (DIS 3.30%) largest theme-park resort in terms of major additions, outside of this summer's opening of Toy Story Land, but it doesn't mean the media giant doesn't have the means to generate buzz for Disney World. Last week it was the move to start charging overnight resort guests daily parking fees that drummed up the ire of mouse-ear-donning theme-park fans, and now we have Monday's reopening of Pirates of the Caribbean generating a hearty flow of online chatter.

Disney took down the iconic boat ride three weeks ago for a refurbishment, and the biggest part of the makeover is replacing the infamous bride-auction scene from the attraction. The classic "we want the redhead" market scene where rope-bound women from the village were being auctioned off as brides has been updated to a less sexist spectacle. The sultry redhead is now a rifle-toting pirate herself, putting up the rum she pillaged up for sale, alongside the men and women of the village auctioning off hens and artwork.

One would think that the update wouldn't be much of a feather-ruffler -- especially since the original was rife with fat-shaming references and sex slavery as a motif -- but social media is percolating with folks upset with the politically correct update. That's fine. Disney and its shareholders can use the attention. 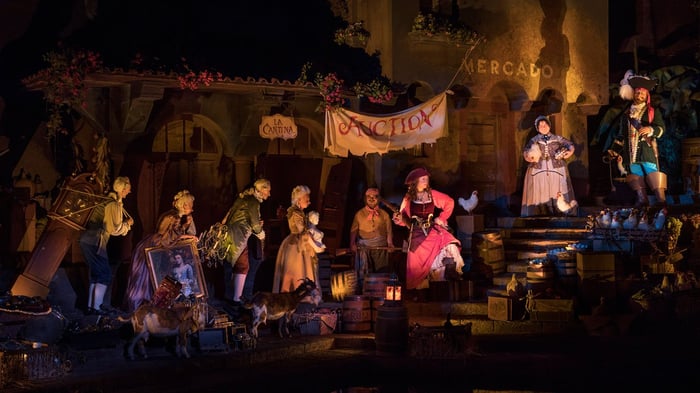 Updates may not be a good thing in the eyes of the traditionalists who make up a good chunk of Disney World regulars, but there's no denying that attraction refreshes have a funny way of drumming up traffic. Queues for Pirates of the Caribbean were heavy all day long for Monday's reopen, and the buzz should continue through the busier Easter break.

Tweaks aren't usually controversial, but when they are -- like December's addition of an audio-animatronic Donald Trump to the park's Hall of Presidents show -- it usually works out. Social media erupted on both sides of the debate with the addition of a talking Trump, but at the end of the day it was successful in drawing record crowds. Disney's domestic theme-park attendance rose 6% in that quarter, Disney's biggest spike in years. There were many factors leading to the increase in visitors, but a news-generating update to a classic attraction didn't hurt then. And it's not going to hurt now.

This week's Pirates of the Caribbean update isn't the only one. A similar makeover will be taking place at Disneyland in California in the coming weeks.

This is the kind of ammo that may be socially necessary in 2018, and it may as well happen now. Disney won't need to pull too many levers to drum up turnstile clicks when Star Wars: Galaxy's Edge opens on both coasts next year. Disney World's on a pace to set attendance records in 2018, only to see them shattered easily next year. Embracing the sea change is what a pirate's life is all about.