Last week, a "strong sell" rating from short-seller Spruce Point Capital drove Kratos Defense & Security (NASDAQ:KTOS) stock down 11% as investors reacted to accusations of "tremendous value" destruction, and a prediction that Kratos stock could drop 40% to 70%.

This week, Kratos fired back.

On Monday, Kratos issued a statement disputing "a report on the Company that has recently been published in the market place" -- presumably referring to Spruce Point's report. But here's the thing: In responding, Kratos argued that Spruce Point's report "includes statements that are factually incorrect and makes misleading assertions" (emphasis added). It challenges some of the short-seller's accusations, but not all of them -- and leaves some of the points most important to investors unanswered. 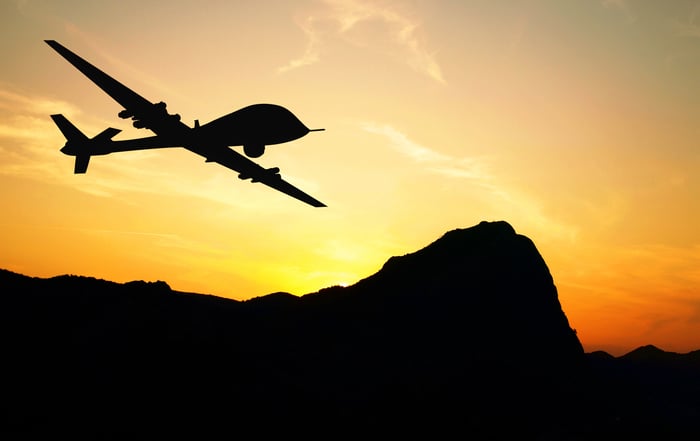 Kratos makes drones, but when will it make money? Image source: Getty Images.

For example, in an interview with CNBC discussing the report, Spruce Point founder Ben Axler characterized Kratos  as something less than a growth machine -- and more a hodgepodge of parts acquired through "some fairly mediocre acquisitions" that will fail to "grow into a leading company" in the drones space.

Kratos responded to this by reiterating that it has a "qualified bid and proposal pipeline" of $6.8 billion in defense tech projects that it hopes to win. As proof that it can win at least some of this work, management points to its "approximately $270 million in contract awards received" over the past few months -- much of which is going toward Kratos' highly touted "high performance jet powered unmanned aerial drone systems (UAS)" business.

As for future opportunities, management highlights the State Department's recent permission for Kratos "to market its Mako tactical unmanned aerial drone systems in Europe and the Asia Pacific area" as one potential area for growth. Additionally, management notes that it is "beginning production on a number of new, long-term, national security-related programs, while increasing production on several existing programs."

All of this suggests that even if Kratos has, as Axler argues, "spent over $1 billion in acquisitions" to assemble its business -- it's at least bought businesses with the potential to grow.

Another criticism Axler leveled at Kratos is that "insiders own nothing in this company." To this, the company responds that "Kratos believes that its insiders currently own approximately 15% of the Company," and that "The Company believes this ownership percentage is among the highest insider ownership of a public company government contractor like Kratos."

Of course, Spruce Point's most telling point against investing in Kratos is also the most banal: criticizing management for continuing to lose money. Kratos' management has "promised for years that they're going to turn a profit," says Axler. Instead, "they're still burning cash flow."

To this charge, Kratos management only reiterated that it still expects "future growth in revenue, profitability and cash flow." But when Kratos reported earnings last month, what did we actually see?

In this regard, it's worth remembering that it's now been nearly a year since Kratos CEO Eric DeMarco told investors he was "fully expecting a return to profitability in Q2" of 2017, and that "profitability [would] increase significantly [in the] second half" of 2017.

Clearly that hasn't happened, and Spruce Point is right to point this out. It might also point out that Kratos burned through $53.5 million in free cash flow last year -- twice 2016's level of cash burn. On the other hand, Kratos' latest forecast promised positive cash from operations "of $35 to $45 million" this year. If Kratos delivers on this promise, and if capex simply levels off at 2017 levels this year (instead of declining, as management has promised), that should be enough to make Kratos free cash flow-positive this year.

If and when Kratos management can point to this promise being fulfilled, that would be the strongest rebuttal to Spruce Point's criticisms that Kratos could possibly make.