Please ensure Javascript is enabled for purposes of website accessibility
Log In Help Join The Motley Fool
Free Article Join Over 1 Million Premium Members And Get More In-Depth Stock Guidance and Research
By Reuben Gregg Brewer – Mar 21, 2018 at 7:18AM

U.S. electric utility NextEra Energy isn't your run of the mill utility. Here's what you need to know to understand it

On the surface, NextEra Energy, Inc. (NEE -1.01%) is a large U.S. electric utility. However, when you dig a little deeper it becomes clear that this Florida-based company has been adjusting right along with the fast-changing electric market. Here are the details you need to know to understand how NextEra Energy makes money for its investors.

Two businesses, and a little more

The core of NextEra Energy's business is Florida Power & Light. This utility serves roughly five million customers in the state of Florida, making it one of the largest electric companies in the country. It's also one of the lowest cost providers of electricity, with an average customer cost of around $100 a month in 2017, compared with the countrywide mean of $140. Low costs keep customers and regulators happy, and make it easier for NextEra Energy to get its spending plans approved (more on this below). This division accounted for roughly 60% of NextEra's adjusted earnings in 2017. 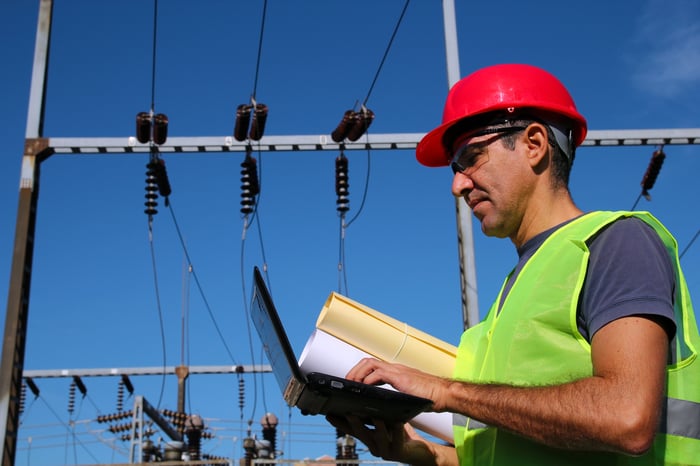 In addition to the regulated FP&L business, NextEra Energy also operates what it calls its Energy Resources division. That's a particularly nondescript name for a division that counts itself as one of the world's largest producers of clean energy. Its portfolio currently has around 20 gigawatts of capacity spread between wind (14 GW), nuclear (3 GW), and solar (2 GW), with the remainder coming from carbon-based power plants. Long-term contracts underpin this business. The division also owns stakes in midstream natural gas pipelines. Energy Resources accounted for around 40% of NextEra's adjusted earnings in 2017.

NextEra Energy is also the general partner of NextEra Energy Partners, LP (NEP -0.55%). This partnership is focused on owning renewable power facilities, a material portion of which were purchased from NextEra. The clean energy production totals noted above include the assets owned by NextEra Energy Partners. The interesting thing about this controlled partnership, however, is that it allows NextEra an additional source of capital because it can monetize assets by selling them, or dropping them down, to the partnership while still retaining control of them and benefiting from them financially.

That's important because a utility like NextEra Energy grows by spending money on its current assets and new ones. Within the regulated FP&L business, the government gets to approve the company's customer rates. So NextEra needs to back up its rate requests with solid performance (like low costs) and capital spending plans that support its business. The current capital budget includes between $17.5 billion and $19 billion worth of spending between 2017 and 2020 at FP&L on things like upgrading power plants, transmission and distribution assets, and renewable power. 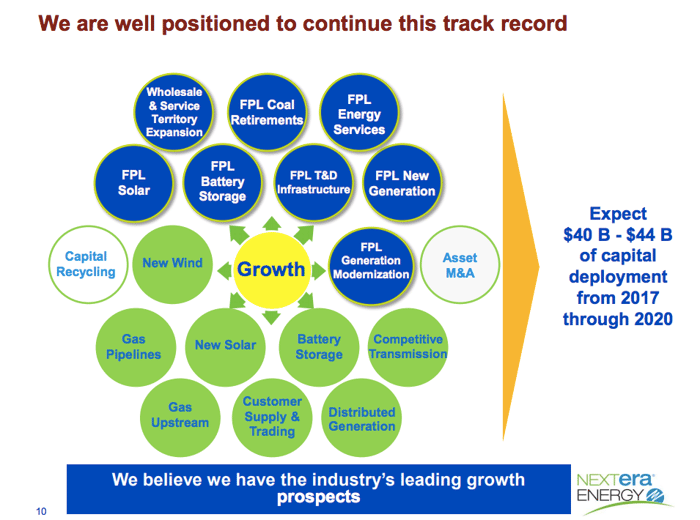 NextEra Energy plans to spend as much as $44 billion on capital projects between 2017 and 2020. Image source: NextEra Energy, Inc.

Within the company's Energy Resources division, growth comes from expanding its asset base so it can increase its reach and scale. The expected spending here is pegged to be as high as $25 billion between 2017 and 2020. It's worth highlighting the obvious: NextEra Energy plans to spend more on capital projects in this division than it does at FP&L as it adjusts to a changing electric market. Projects here include new wind, solar, and energy storage assets. Being able to drop completed assets down to NextEra Energy Partners makes it that much easier for the giant utility to come up with the cash it needs to support such a high level of spending as it moves aggressively into the renewable power space.

Stepping back, all of the utility's spending is expected to boost earnings by 6% to 8% a year between between 2018 and 2020. This, in turn, is projected to support dividend growth of between 12% and 14% a year over over the time span. That's around four times the historical growth rate of inflation. That's particularly impressive performance for a utility, and helps explain the stock's relatively low 2.8% yield -- investors have bid the price up to account for the strong earnings and dividend growth outlook. This is more of a growth-oriented utility than the stodgy, boring one you might expect widows and orphans to own.

If you thought NextEra Energy was just a boring old utility, you would be very wrong. The Florida Power & Light business would easily fit that description, but the company's push into renewables within the Energy Resources division does not. And with the company's capital spending plans calling for more money to be spent in the Energy Resources group than in FP&L, investors need to think about NextEra Energy a little differently than some of its more conservative peers. There is, indeed, more to understand here once you dig beneath the surface.