Steelcase's fourth quarter by the numbers

Steelcase's bottom line stopped within a rounding error of zero dollars in standard accounting terms. Backing out a one-time tax charge of $28 million, you get the adjusted figures listed above. The unique tax item was a noncash revision of Steelcase's deferred tax assets, based on December's tax cuts and new treatment of earnings collected beyond U.S. borders.

Beyond these accounting quirks, Steelcase delivered a solid report.

Your average Wall Street analyst would have settled for adjusted earnings near $0.16 per diluted share, culled from top-line sales of roughly $750 million. The actual results left these targets far behind. In management's guidance for the fourth quarter, the top end of Steelcase's revenue forecast stopped at $765 million. The high end of the official earnings guidance range was $0.16 per share.

According to Steelcase's internal estimates, office furniture shipments have been rising steadily since 2009 in the U.S., while European unit volumes are climbing back from a more recent trough in 2013. These trends are expected to continue in the newly started fiscal 2019 and beyond -- and that's where the tax changes enter the conversation again. 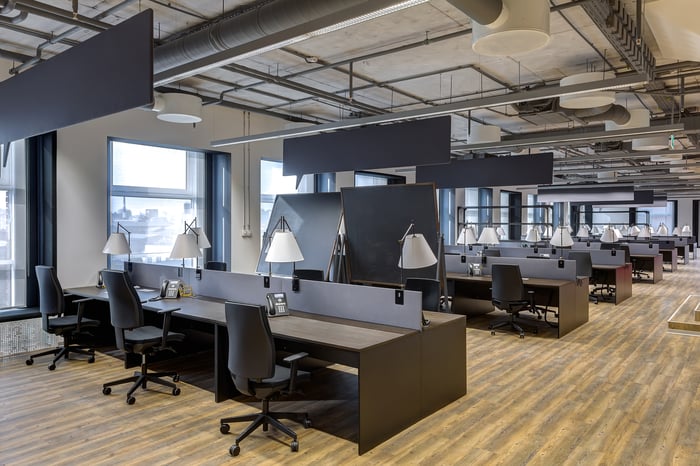 Open office spaces like this one are all the rage, and Steelcase is tapping into that trend. Image source: Getty Images.

Steelcase CEO Jim Keane naturally expects a bottom-line lift from the new, lower corporate tax rates in America. But it's more than just a change to Steelcase's own tax payments. In this environment, Keane sees corporate CEOs getting more comfortable with increasing their office furniture budgets, and rising CEO confidence has historically been a good indicator of upcoming order volumes for Steelcase.

The company isn't enjoying all of the Trump administration's recent moves, though.

Being a major consumer of raw steel and aluminum materials, Steelcase expects to feel the pinch from high tariffs on imported metals. The company uses mostly domestic aluminum and steel, but those prices started rising even before the import tariffs had been finalized. Keane outlined a $10 million impact on his company's annual production costs from this factor, and it will take some time before Steelcase can shift the higher costs over to its customers in the form of higher prices.

"It is unfortunate that this tariff intended to protect jobs in one important sector has the effect of reducing the competitiveness of those of us with the strong commitment to U.S. manufacturing who are potentially improving the competitive advantage of low cost importers," he said, according to a Seeking Alpha transcript of Steelcase's fourth-quarter earnings call.

To be clear, the positive tax effects should outweigh the profit-slashing rise in production costs.

What's next for Steelcase?

Amid these puts and takes, Steelcase is moving forward with confidence. The company is launching plenty of new product lines focused on high-growth markets such as simpler workstations for open office environments. At the same time, stabilizing economies and political backdrops in key markets like France and Germany are helping Steelcase chase down high-margin contracts there.

All told, Steelcase expects to deliver modest sales growth and widening gross margins in 2019, which should result in significantly higher earnings.