Shares of Southwest Airlines (NYSE:LUV) slumped on Wednesday after the airline updated its guidance for the first quarter of 2018. The company sees revenue per available seat mile, or RASM, coming in weaker than originally expected. The stock was down about 5.2% at 12:30 p.m. EDT.

Southwest now expects first-quarter RASM to be roughly flat compared to the prior-year period. During the first quarter of 2017, the company booked a RASM of 13.23 cents, adjusted for a new revenue-recognition standard. 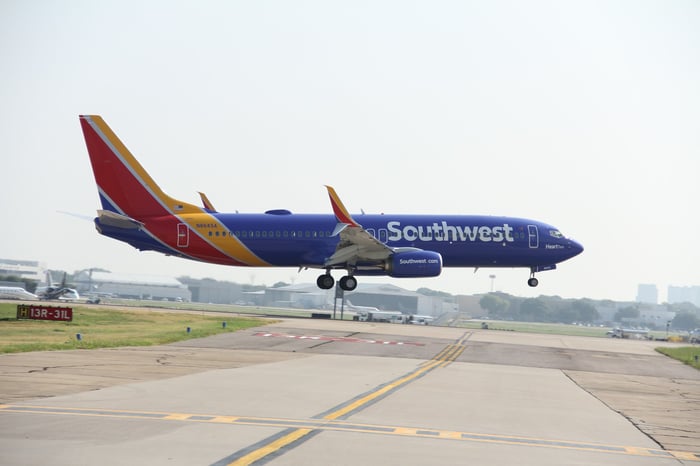 The company had previously guided for a 1% to 2% year-over-year increase in RASM. Southwest blamed a competitive fare environment pressuring passenger revenue yields and lower-than-expected travel demand due to the timing of spring break holidays for the lowered guidance. The company also pointed to a suboptimal first-quarter flight schedule due to the retirement of its Boeing 737-300 Classic fleet.

On top of the guidance cut, another major storm in the Northeast could be contributing to the decline in Southwest's stock price.

Southwest tried to find some silver linings. The company still plans to grow RASM for the full year, with benefits expected in the second half from enhanced revenue-management capabilities. The company also said it was encouraged by cost trends. Operating expenses per available seat mile in the first quarter are expected to be flat to up 1% year over year.

Some of the reasons Southwest gave for the guidance cut were temporary issues, but there's no telling how long the current competitive fare environment will persist.