Please ensure Javascript is enabled for purposes of website accessibility
Log In Help Join The Motley Fool
Free Article Join Over 1 Million Premium Members And Get More In-Depth Stock Guidance and Research
By Will Ebiefung - May 25, 2020 at 7:50AM

The coronavirus pandemic has smashed the tourism industry, but these companies seem ready for a massive rally.

Travel and tourism are arguably the hardest-hit sectors of the economy during the coronavirus pandemic as governments around the world have instituted lockdowns and travel restrictions to slow the spread of the deadly infection. But while the crisis is far from over, things should eventually get back to normal. And if you're confident in the industry's recovery, this might be the ideal opportunity to scoop up these stocks while they're still so cheap.

Here are three high-quality travel stocks that are poised for a bull run. The first pick, Southwest Airlines (LUV -0.17%), is a bet on the resurgence of the U.S airline industry. While the other two, Carnival (CCL -2.48%) and Norwegian Cruise Line (NCLH -3.89%), are based on a rebound in cruise tourism. All three stocks are set to soar as the travel industry bounces back from the pandemic. 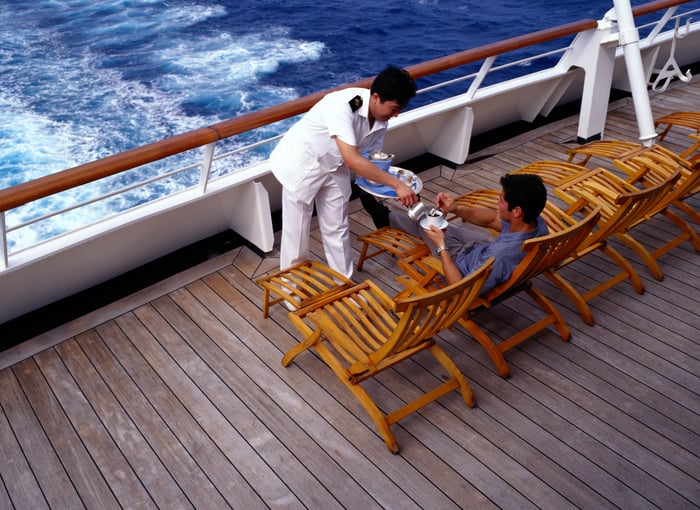 Southwest has been under pressure since Warren Buffett revealed his decision to sell his position at the Berkshire Hathaway investor meeting on May 2. This news (along with the pandemic) has sent the stock tumbling around 47% year to date. But while the airline industry faces severe near-term challenges due to travel restrictions and poor consumer sentiment, Southwest is poised for a rally thanks to its robust business model and strong balance sheet.

Southwest has a lean operation that has seen it earn a profit for 47 consecutive years. The company also has a reputation for good customer service, according to 2019 airline scorecards. It reported $5.5 billion in cash and short-term investments at the end of the first quarter versus $5.1 billion in long-term debt.

This financial strength leaves it well positioned to withstand the crisis and benefit from a rebound in domestic travel when the industry recovers. The company has added $6.8 billion to its cash reserves so far this year, including $3.3 billion in funding from the federal government under the CARES Act. The company will also benefit from the recertification of the 737 Max, which CEO Gary Kelly believes will occur in the fourth quarter of 2020.

Carnival is one of the highest-profile corporate victims of the pandemic. The company suffered several massive outbreaks of the disease on its Princess line of cruises and recorded a $731 goodwill impairment charge in the first quarter after writing down the value of its vessels. These challenges have sent the stock down over 70% year to date. But Carnival has enough liquidity to sail through the pandemic.

The company raised a huge amount of capital to help it weather the crisis. The company undertook a public offering of 62.5 million shares priced at $8 and a debt raise of $4 billion in 11.5% senior secured notes, along with $1.75 billion in 5.75% senior convertible notes, both due in 2023. According to CEO Arnold Donald, Carnival has enough cash to make it through 2020 even it generates zero revenue for the rest of the year, a worst-case scenario.

On May 4, Carnival announced plans to resume North American service on Aug. 1, but this will depend on whether or not the CDC lifts its no-sail order by then. But even if Carnival doesn't sail for the rest of the year, 2021 bookings are strong according CEO Arnold Donald. This suggests there is significant pent-up cruise demand among consumers, and the cruise operator may quickly return to profitability when restrictions are lifted.

With a market cap of just $3.6 billion as of this writing, Norwegian is the smallest of the three U.S.-listed cruise stocks. And like its peers Carnival and Royal Caribbean, the company has been hit hard by the pandemic. Shares have collapsed about 75% year to date, and the company recently released a Securities and Exchange Commission filing highlighting uncertainty about its ability to continue as a going concern. The pessimism is overblown and has created a situation where risk-tolerant investors can scoop up shares at rock-bottom prices to benefit from a rebound in the industry.

While bankruptcy is possible, it's not very likely as Norwegian can survive for over 18 months with zero revenue, according to CEO Frank Del Rio.

Norwegian expanded its liquidity to $3.1 billion as of its May 14 earnings presentaiton. And the company drastically reduced operating expenses by shortening workweeks, slashing salaries, and furloughing around 20% of shoreside employees until July 31. Altogether, the efforts are expected to reduce costs to $70 million to $110 million per month, helping the company conserve its precious cash until the industry returns to normal.

While Norwegian remains a risky investment, there are already signs of hope. According to management, 2021 bookings are within historical ranges compared with the same period last year, further supporting the possibility for demand to recover quickly as the threat of the pandemic fades.

The travel and tourism industry is a high-risk, high-reward place to invest right now. Its recovery relies significantly on factors outside the companies' direct control such as government restrictions and a potential coronavirus vaccine. But lockdowns are already easing around the world, and several companies are racing to develop medical treatments for COVD-19, with some in Phase 2 testing.

Over the long-term, travel and tourism is a huge part of the U.S. economy -- contributing 7.8% of GDP in 2018. Though the inevitable shakeout will be challenging for the sector, the strongest companies are here to stay. Investors with a healthy appetite for risk and volatility can take advantage of this opportunity to scoop up shares of top travel and tourism companies for cheap.