Maintaining current profitability levels is a task every dollar retailer struggles with. Here's a look at Dollar General's approach in the current fiscal year.

Dollar retailer Dollar General Corporation (DG -1.39%) recently reported on its successful fiscal fourth quarter of 2017 (year ended Feb. 2, 2018), and provided vigorous guidance for the current year. The company anticipates 9% revenue growth, which will be fueled by the opening of 900 new stores (on a base of over 14,000), as well as projected comparable-store sales growth of 2.5%.

Dollar General's performance over recent quarters has been keyed by its ability to maintain profitability at the gross margin level, despite inflationary trends and the competitive nature of the dollar store industry. In fiscal 2017, Dollar General achieved a gross profit margin of 30.8%, holding the line on its prior-year gross margin of 30.9%. During the company's earnings conference call on March 15, management described specific strategies executives are implementing to maintain gross margin in the coming year. Let's review these strategies briefly below.

One of the most frustrating types of inventory shrink (wastage or loss) for dollar retailers is that which results from shoplifting. Smaller-store footprints with their narrower aisles often make theft prevention a challenging task. Dollar General will invest in technology to stymie theft in 2018, primarily through doubling its EAS (electronic article surveillance) capability, from 5,000 to 10,000 stores. EAS systems utilize physical item tagging that is most often based on electromagnetic and radio frequency identification technology, and, to a lesser extent, video surveillance. During Dollar General's earnings call, CEO Todd Vasos noted the following: "This is a proven high-return project for us to help reduce shrink and drive sales by improving on shelf availability."

If you're an investor in consumer goods companies, you've probably already seen consumer-based retailers blame higher shipping costs for lower profit margins at the end of 2017, and at the outset of 2018. Higher fuel costs, a shortage of truck drivers, and robust economic demand have inflated the net cost to ship goods. This has impacted reported results in the consumer space across a wide range of companies, from Amazon.com to General Mills.

Dollar General has promised investors that it can absorb higher shipping costs in 2018 by finding offsetting efficiencies, such as productivity gains. It's also attempting to trim transportation costs by expanding its own private fleet of trucks, optimizing truckloads, and reducing "stem miles." Stem miles comprise the distance a truck must travel before it reaches its actual delivery route. Often, such miles can be reduced by reducing the number of trucks within a delivery area. Achieving this, of course, depends on the successful software-aided truckload optimization mentioned above. 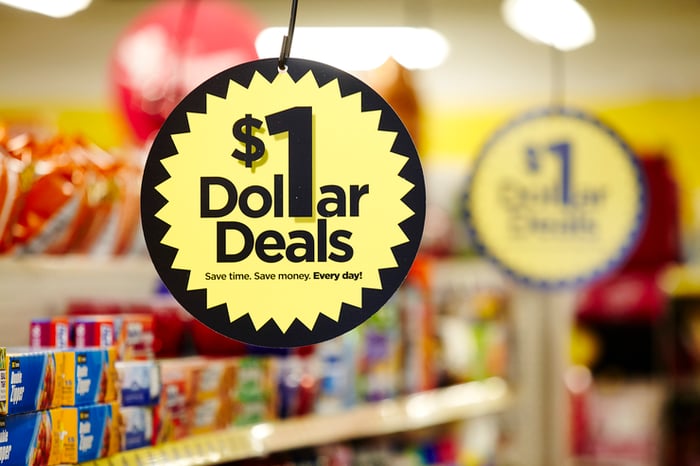 As in the grocery industry, dollar retailers find additional margin in selling proprietary, or "private label" goods to customers, often through contracts with brand name manufacturers. Dollar General has gradually increased the penetration of private label goods in its stores, to between 22% to 24% of revenue in a given quarter.

Management is seeking to expand the percentage of private label sales in stores in 2018, as these typically carry higher profit margins versus branded merchandise. The company may find a sweet spot by selling private label items within health and beauty products, a category that management has named a key growth focus for this year. After a test run in 2017, Dollar General is planning to promote health and beauty products across its entire store base in 2018, and executives have hinted that private label brands will play a significant role in the roll-out.

For the longest time, when a U.S. retailer discussed global sourcing as a means to improve margin, this was shorthand for sourcing more goods from China. But as of late, as Chinese manufacturing wages have increased, the country isn't always the lowest-cost producer for importers to consider.

During last week's earnings call, CEO Vasos told analysts that while the company was still "China-centric," it's now buying from a host of other countries that offer a mix of competitive pricing, quality, and timely delivery to the U.S. Vasos indicated that Dollar General has an opportunity to reduce cost of goods sold by $4 billion to $5 billion annually over the lon term, through the expansion of new export partner relationships.

Most of the gross margin initiatives under way at Dollar General address the trimming of costs. But a company can also expand margins simply by selling more items that command higher price points. While management has insured investors that it will stick to a recent formula of keeping the majority of "DG" products priced at $5 or below, there's room within an important 2018 project to capture higher-value sales.

The company refers to this project as the "treasure hunt." The initiative seeks to continually cycle unexpected items through stores to keep loyal customers guessing over what they'll find on each new visit. It's a theme that Dollar General has tested with some success in the past, and in 2018 the treasure hunt will scale across 700 stores and encompass hundreds of unique items.

This activity will help boost margins by enticing customers into impulse buys, often at profitable price points for Dollar General. But in theory, the element of surprise should amplify the frequency of visits by the company's most ardent patrons. And higher traffic lifts both comparable-store sales and the total top line, providing a nice lift to overall gross margin. Shareholders watching Dollar General's gross margin should keep an eye on this project in the coming quarters. If successful, expect to see it roll out to a much wider portion of the company's 14,000-plus locations later this year.