The ubiquitous provider of study aids to high school and college students is exploiting a lucrative niche.

Chegg Inc.'s (CHGG -0.87%) motto, the semantically trippy "A Smarter Way to Student," may be one of the clunkiest promotional tags in the educational services business. However, the company can claim to have one of the industry's best business models. During its fourth-quarter 2017 earnings conference call last month, CEO Dan Rosensweig noted that the recently concluded year marked Chegg's first as "an all-digital company."

The departure from life as a renter and seller of textbooks with middling margins began in 2014, when Chegg inked an agreement to allow Ingram Content Group, one of the world's largest book wholesalers, to fulfill some of its textbook rentals and sales. Chegg expanded the agreement in 2015, and completed the transition in 2016: Ingram now fulfills all of Chegg's print textbook rentals and sales.

Thus, in the last three years, print textbook rental revenue has declined, and it now only comprises commissions received from Ingram. By last year, Chegg's physical textbook inventory had dropped to zero, from $80.8 million at the end of 2014. Not surprisingly, however, gross profit margin has soared, from just 31.5% in 2013, the year before the Ingram agreement, to 68.5% in 2017. 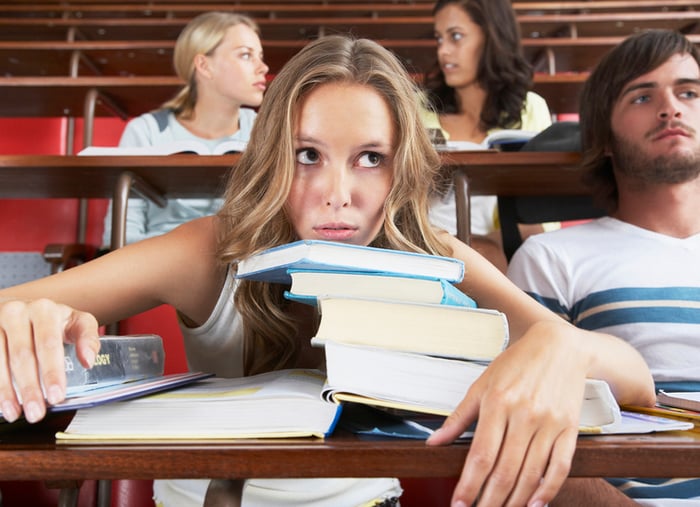 Handing over the physical work of providing print textbooks has allowed Chegg to concentrate on the more profitable businesses of study aid content and tutoring. A business segment called Chegg services is comprised of Chegg Study, Chegg Writing, and Chegg Tutor, as well as other services like test prep and internship assistance. Chegg services revenue grew 37% in the fourth quarter to $60.5 million, and the segment generated 82% of total company revenue during quarter.

Incidentally, the rest of the company's top line fell under the "Required Materials" umbrella, which includes the commissions Chegg derives from Ingram and assorted publishers (who provide e-textbook sales and rentals). The 17% of total revenue generated by required materials is another indicator of the relative places that study materials and content services occupy in management's eyes today.

Filling a vital student need paves the way for growth

If rapidly climbing profitability is any measure, then Chegg's business model evolution argues for a closer look from prospective investors. The company's core value proposition now rests on the Chegg Study subset of Chegg services. According to management, Chegg Study has grown to include 7 million textbook solutions across 28,000 ISBNs (International Standard Book Number). The company utilizes 35,000 contracted subject matter experts who are available to answer student questions. An ever-expanding library of answered questions and textbook solutions presently numbers over 20 million.

Much of this content addresses the subjects of math and English, where management believes the organization's greatest growth opportunities reside. During Chegg's February earnings conference call, Rosensweig noted that 40% of students require remediation in math, English, or both. The need for remediation is propelling Chegg Tutor, which derives 50% of its business through referrals from other Chegg services.

To capitalize on demand for math assistance, Chegg acquired German math education provider Cogeon GmbH in October 2017 for $15 million in cash. Cogeon utilizes artificial intelligence technology to adapt to a student's specific deficiencies through its flagship app, Math 42. Math 42 will be launched through Chegg on a subscription model later this year.

Creating valuable content in numerous subject areas has increased profitability. During the February earnings call, Rosensweig explained that Chegg's 7 million solutions to 13 million questions are all indexed by search engines, and thus, 85% of the company's search results are organic.

I believe this is a tremendous advantage that explains one facet of margin growth following the Ingram deal. At a 68.5% gross margin, the cost to Chegg of each subscription sale is roughly 31.5%. This low cost stems partly from the benefit of organic search results, which minimize what the company is required to spend on marketing.

Will a robust competitor eventually eye Chegg's high profitability and move to capture some of its market share? Presently, the company doesn't have a bona fide peer that competes across the range of services it offers.

Rather, competition is fragmented, not unlike the education industry itself. Publishers, college bookstores, and Amazon.com figure as rivals in the textbook sale and rental business. In its most recent 10-K annual report filing, Chegg lists free services such as Yahoo! Answers as competitors in its expert answering service. Peer-to-peer tutoring service TutorMe and advanced topics specialist Skooli are examples of Chegg's competition in the tutoring space.

For now, in the absence of true rivals, the company can hone its competitive advantages. Near the top of this list is Chegg's hold on perhaps the widest brand recognition in the industry. According to management, Chegg's brand awareness among college students has reached an impressive 80% in 2018.

When competition does intensify, Chegg will have an extremely robust balance sheet to provide for product pricing modifications it may need to undertake. As of its most recent balance sheet date, all but $4.3 million of Chegg's $55.9 million in total liabilities was classified as current. These liabilities are a little more than a quarter of Chegg's cash and investments on hand of $208.2 million. Thus, the company enjoys healthy liquidity. Even better, Chegg carries zero net debt (total long-term debt less available cash) on its books.

As Chegg expands, management is for the moment sticking to sales in the U.S. while it methodically refines the organization's offerings. However, now that Chegg is a completely digital platform, executives see English-speaking countries like the U.K. and Australia as initial entry points into the global education market. Still a niche company, Chegg may become harder for investors to ignore as it amplifies its presence in the coming years.

John Mackey, CEO of Whole Foods Market, an Amazon subsidiary, is a member of The Motley Fool's board of directors. Asit Sharma has no position in any of the stocks mentioned. The Motley Fool owns shares of and recommends AMZN. The Motley Fool has a disclosure policy.

Management Is On a Buying Frenzy for This Growth Stock

This Staggering Statistic Could Be Costing Chegg