The graphics quality in video games has vastly improved over the years, driven by the ever-increasing processing power of modern graphics cards. NVIDIA's (NASDAQ:NVDA) GeForce GTX 1080 Ti graphics card, for example, is capable of over 10 trillion single-precision floating point operations per second.

You may be thinking, "Aren't we nearing the point where video games are so realistic that graphics cards don't need to get any more powerful?" If NVIDIA has anything to do with it, that day is far in the future. The company unveiled its RTX ray tracing technology on March 19, in conjunction with Microsoft's announcement of a new ray tracing API for DirectX. 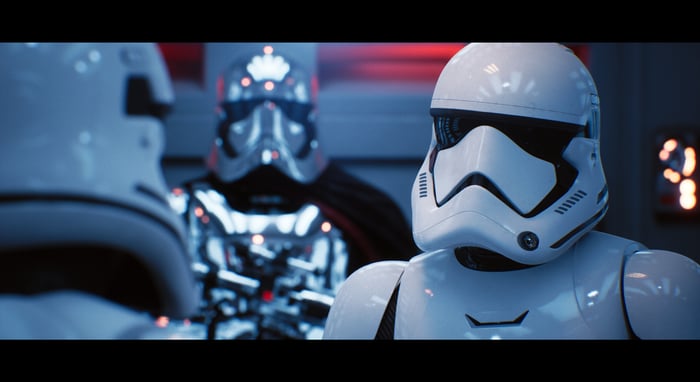 Ray tracing in a nut shell

Today's graphics cards render images to the screen using a process called rasterization. Rasterization takes a scene, comprised of a bunch of triangles, and projects it onto the screen by doing some math. The process is extremely fast, but getting a realistic result, with shadows, reflections, and other effects, is far from trivial, requiring additional algorithms and tricks.

Ray tracing, on the other hand, mimics how the human eye perceives the world. In real life, light is emitted from a light source -- the sun, a light bulb, etc. That light bounces off a bunch of different objects, reflecting, refracting, and getting partially absorbed. It eventually reaches your eye, and your brain translates that into what you see.

Ray tracing generally goes in the opposite direction. For each of a screen's pixels, one or more light rays, which are just straight lines, are launched into the 3D scene. Where that ray first intersects with an object within the scene, new rays are spawned from that point. One ray represents the light that's reflected. Another represents light that's refracted through a transparent or translucent surface. And other rays are launched toward each light source to determine if any other object is in the way.

Each reflected and refracted ray, upon hitting another surface, spawns more new rays. This process continues up to a set limit, with a greater number of iterations leading to a more realistic image. The end result is the correct color for each pixel, calculated by summing up the contributions from all of those spawned rays. Effects like shadows and reflections are a built-in result of this algorithm.

This process gets computationally intensive fast. A standard 1080p screen has 2 million pixels. Given the above procedure, the number of total rays can easily get into the tens or hundreds of millions, or even more for a complex scene with many light sources. And all this must be done every single frame. For a game running at 60 frames per second, the GPU has just 16.7 milliseconds to churn through all these calculations.

Epic Games, the company behind the Unreal game engine, showed off a ray tracing demo at the Game Developers Conference earlier this week. The demo, featuring characters from Star Wars, only used ray tracing for a portion of the scene, using standard rasterization for walls and other elements. It ran at just 24 frames per second, and still required NVIDIA's DGX Station, a $60,000 top-of-the-line four-GPU system. Clearly, fully ray traced games on consumer hardware are still a long way off.

In order to continue selling vast quantities of high-priced graphics cards, NVIDIA needs to give gamers a good reason to shell out hundreds, and in some cases thousands, of dollars on new hardware. Ray tracing is that reason. Given the computational intensity, NVIDIA's RTX tech will be used sparingly at first within games. Even with NVIDIA's highest-end hardware, full-scale ray tracing remains far out of reach.

But over time, ray tracing will undoubtedly become the standard. That will require the graphics cards of tomorrow to be vastly more powerful than the graphics cards of today. NVIDIA's success over the past few years has been due in part to the company's ability to push up prices, convincing gamers to spend increasing amounts of money on gaming hardware. The promise of ultra-realistic games enabled by ray tracing will allow the company to continue this trend far into the future.