The Pew Research Center released the results of its latest social media survey at the beginning of this month, and unsurprisingly, Facebook (NASDAQ:FB) and YouTube are in a league of their own. About 73% of U.S. adults use YouTube, which is a subsidiary of Alphabet's (NASDAQ:GOOG) (NASDAQ:GOOGL) Google, and 68% use Facebook.

For comparison, the next most-popular platform was Facebook-owned Instagram, which 35% of U.S. adults use. Followed by Snapchat, owned by Snap Inc. (NYSE: SNAP), with 27%, and Twitter (NYSE: TWTR) with 24%.

Most Americans could have guessed that Facebook and YouTube would top the list of most-used social media platforms, but there are some less-obvious takeaways that can be gleaned from the survey. 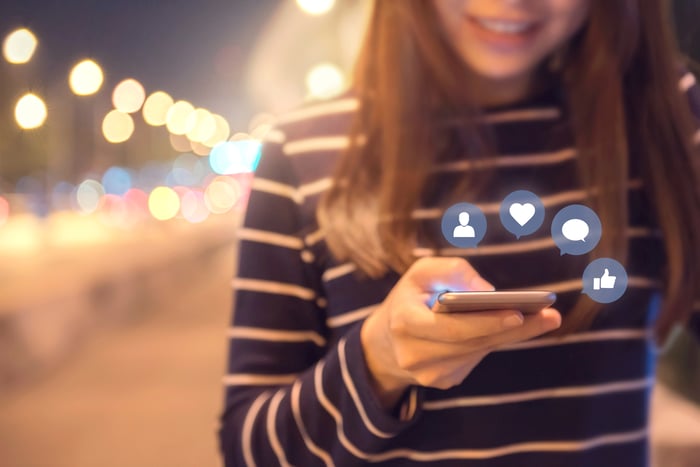 Social media may be harder for some to give up, but many users say they could

Pew found that 51% of adult U.S. Facebook users, 49% of Snapchat users, and 38% of Instagram users open those apps several times every day. In fact, the share of social media users who said that the platforms would be hard to give up has jumped to 40% of users -- 12 percentage points more than in 2014.

But while the overall percentage of users who are say their social media habits would be hard to kick rose, a majority of users (about 59%) still say it wouldn't be hard to give these platforms.

That's less of a problem for Facebook, considering that it has 2 billion users, and more than one popular social media platform. But we've already seen the type of damage smaller players can endure when high-profile celebrity users ditch them. Snapchat's parent company, Snap, saw its shares tumble 7% after Kylie Jenner sent out a tweet last month saying that she hardly opened the app any more. And after Rihanna accused the company of promoting domestic violence last week, its stock plunged again.

One of the most-interesting bits of data from the Pew survey had to do with the lack of trust that people have in the companies that they very willingly hand their photos, videos, likes and comments to.

"Despite using them for a wide range of reasons, just 3% of social media users indicate that they have a lot of trust in the information they find on these sites. And relatively few have confidence in these platforms to keep their personal information safe from bad actors," Pew said.

That last point is particularly interesting in light of the problems Facebook faces now. The company previously had to admit that it allowed Russians to buy advertising on its platform that was intended to influence U.S. voters in the 2016 election; Facebook has changed some of its advertising policies as a result.

Most recently, it was revealed that Strategic Communications Laboratories (SCL) and data analytics firm Cambridge Analytica had broken Facebook's rules and scraped the site for data about nearly 50 million users without their knowledge or consent. Cambridge Analytica is alleged to have used that information to craft targeted political messages to boost Donald Trump's 2016 presidential campaign.

Facebook said in a recent blog post that its policies were violated because user data was passed on to third parties when it wasn't supposed to be, and the data wasn't deleted after Facebook requested it be. The company has now suspended SCL and Cambridge Analytica from its platform, but the Federal Trade Commission (FTC) opened up an investigation into the incident this week. It all raises a lot of questions about how effectively social media companies are protecting their users' data.

What all of this means for social media investors

Most of the information in Pew's survey is good for social media companies and their investors. But the recent revelations of how Facebook has been taken advantage of, and the indications that, at least in the recent past, it wasn't doing enough to protect users' data are not good signs.

The Pew survey came out a few weeks before Facebook's latest problems began bubbling to the surface, but the results show that even before this, Americans haven't trusted social media companies to protect their data. Its clear now they've been dead right to be concerned. Facebook said that it changed some policies in order to ensure that similar problems don't happen again, but the company has a long way to go to prove that it truly places its users' interests first.