GoPro (NASDAQ:GPRO) is the leading action camera company, with its products accounting for more than 80% of action camera unit volume in the U.S., according to NPD. But this dominance hasn't really mattered. GoPro's revenue crashed 38% year over year during the fourth quarter of 2017, after the company slashed prices on some of its products after seeing soft demand. It was the worst holiday quarter since the company went public back in 2014.

The fundamental problem seems to be that the market for expensive action cameras is only so big. The company is taking some steps to right the ship, including layoffs that will bring its global employee count below 1,000 and a complete exit from the drone market. These are necessary to bring costs down, but they don't solve the core problem. 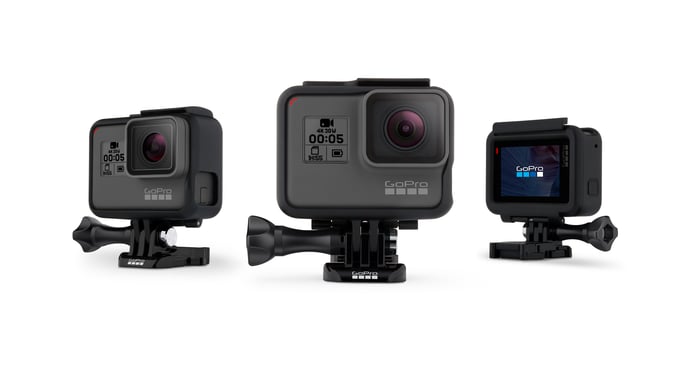 On March 22, GoPro announced what looks like a great move. The company has partnered with Jabil (NYSE:JBL), a manufacturing and engineering services provider, to put its technology into third-party devices. The global, multiyear technology and equipment license agreement will provide GoPro with some revenue independent of the action camera market while extending the reach of its technology. After a long string of blunders, GoPro is finally doing something right.

With sales of action cameras crashing for GoPro, it makes sense to try and monetize all of the research and development the company has done over the years. I suggested back in 2016 that one path GoPro could take to get back on track was to partner with a hardware company and put its technology in third-party devices. The Jabil deal goes even further in that direction.

The deal will allow Jabil to leverage GoPro's reference designs and intellectual property to produce camera lenses and sensor modules for third-party products and solutions. Each third-party product will require GoPro's approval, so we won't be seeing any competing action cameras featuring GoPro's technology.

GoPro CTO Sandor Barna discussed the potential of the deal in the company's press release:

This collaborative approach with Jabil will enable innovative, GoPro enabled products and services from some of the most exciting hardware and software companies out there. Imagine a world where video conferencing, robotics, and even self-driving cars are powered by GoPro's camera lenses and image sensors. Together, GoPro and Jabil can make this a reality.

This deal should bring in some high-margin revenue for GoPro, assuming other companies are interested it its technology. An alternative for GoPro would have been to launch new categories of products featuring its lenses and sensors on its own. But given the company's experience in the drone market, it's a good thing it didn't choose that route.

GoPro's Karma drone was supposed to be a catalyst for the company's turnaround. After multiple delays, Karma finally launched in October 2016. Weeks later, the company was forced to recall the small number of drones it had sold due to a power failure issue. It eventually became available for sale again, but the damage was done.

GoPro then announced its exit from the drone business in January of this year, citing an extremely competitive market and a hostile regulatory environment. Neither should have been a surprise for GoPro, but apparently, the company was caught off guard.

The Karma debacle taught the company an important lesson: Entering new markets is hard. The licensing deal with Jabil is an indication that GoPro is taking that lesson to heart.

How much revenue this deal ultimately generates for GoPro depends on how many companies opt to use its technology. GoPro hopes to return to profitability in the second half of this year. Along with new product launches and cost cuts, this licensing deal should help move the bottom line in the right direction.