Major catalysts don't always come by surprise for biotechs. Many of them can literally be put on the calendar. Investors simply have to wait until the magic date to see if the stock jumps or falls based on the biotech's news.

Three biotechs in particular await key decisions from the U.S. Food and Drug Administration (FDA) in April -- GW Pharmaceuticals (NASDAQ:GWPH), Incyte (NASDAQ:INCY), and Neurocrine Biosciences (NASDAQ:NBIX). Here's why these biotechs could get big boosts next month. 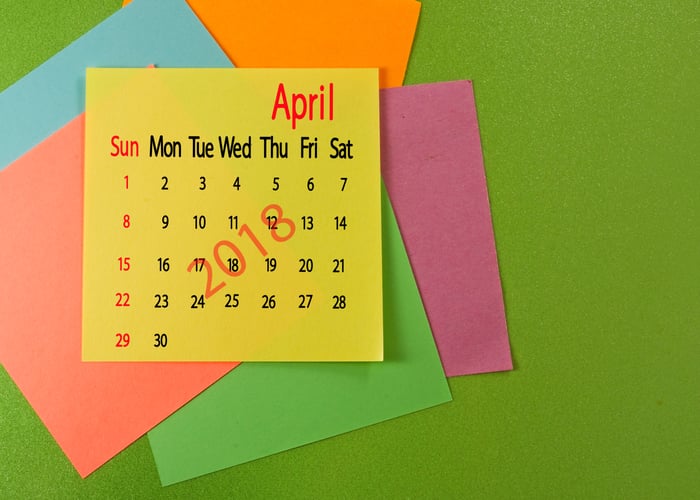 GW Pharmaceuticals could be on track to win the first FDA approval for a cannabinoid drug with blockbuster potential. But the first hurdle is an FDA advisory committee meeting scheduled for April 19. The advisory committee will discuss GW's cannabidiol product Epidiolex as a potential treatment for Lennox-Gastaut syndrome and Dravet syndrome, both of which are forms of epilepsy.

Because of this high correlation, a positive recommendation by the advisory committee on April 19 should result in a nice bump for GW Pharmaceuticals stock. The biotech's share price is down more than 10% year to date as GW awaits its next catalyst. The really big news for the company, though, will come a few months later, with the FDA scheduled to announce its approval decision for Epidiolex by June 27.

Incyte is another biotech anxiously looking forward to an FDA advisory committee meeting next month. On April 23, the Arthritis Advisory Committee is scheduled to discuss Olumiant (baricitinib) as a potential treatment for rheumatoid arthritis.

Actually, it's Eli Lilly (NYSE:LLY) that submitted Olumiant for approval. Incyte licensed global commercialization rights to the oral JAK1/JAK2 inhibitor in 2009. However, Olumiant is more critical to Incyte's success than it is Lilly's.

We saw evidence in April 2017, when the FDA issued a complete response letter for Olumiant: Incyte stock fell more than twice as much as Lilly's did on the bad news. A similar effect followed in August, after the two companies announced that they would be able to resubmit Olumiant for approval by early 2018. You can probably count on seeing Incyte stock move higher yet again if the advisory committee vote is positive. The FDA is scheduled to make its final decision on approval for Olumiant by June.

Neurocrine Biosciences doesn't have to go through an advisory committee review of elagolix as a potential endometriosis treatment. The FDA didn't announce an exact PDUFA date for the drug. However, because elagolix received priority review status, its review period will be six months -- which means a decision should be announced by late April, if not earlier.

AbbVie (NYSE:ABBV) licensed exclusive worldwide commercialization rights to elagolix from Neurocrine in 2010. Approval for the drug would be good news for the big pharma company, which has recently taken a big hit from a pipeline setback with experimental cancer drug Rova-T. However, approval for elagolix would be even greater news for Neurocrine. The biotech currently has only one product on the market, with tardive dyskinesia drug Ingrezza.

Endometriosis is just the first targeted indication for elagolix. The drug is also being evaluated in late-stage studies for treating uterine fibroids. AbbVie CFO Bill Chase recently said that "even in a worst-case scenario, [elagolix] is clearly a $1 billion plus asset." If he's right, Neurocrine stands to receive significant milestone payments and royalties in the not-too-distant future. But the biotech first needs a win in April.

Of course, it's entirely possible that each of these three biotechs could receive bad news instead of good news. Which scenario is more likely for the companies?

For Lilly and Incyte, I think the second time will be the charm. The two companies were able to resubmit Olumiant for approval more quickly than most observers thought they would be able to do. That could be a good sign for the prospects with the advisory committee and the subsequent FDA decision.

I don't see any major issues for elagolix, either. In my view, AbbVie should get some much-needed good news. And Neurocrine is likely to get a nice bump that will push the stock even higher after nearly doubling over the last 12 months.

Still, anything can happen with the regulatory process -- as Lilly and Incyte have already experienced with Olumiant. I think GW Pharmaceuticals, Incyte, and Neurocrine Biosciences should see their stocks move higher on positive news in April. But the boosts that I expect could still turn out to be busts.