The pricey new gadget is unlikely to reverse the company's yearslong decline in the education market.

Over the past five years, Apple (AAPL -0.34%) has watched Alphabet's (GOOG -0.44%) (GOOGL -0.55%) Google take over the market for mobile devices in U.S. schools. Google's devices, primarily inexpensive Chromebooks, now account for more than 60% of all mobile device shipments to U.S. schools, up from around 5% in 2012. Apple has gone in the opposite direction, with its market share plummeting from over 50% in 2012 to a touch under 20% today.

Apple is aiming to reverse its fortunes in the education market with a new iPad, announced at an event on March 27. The 9.7-inch device has full support for the Apple Pencil, the company's digital stylus, and it's priced at $329 for consumers and $299 for schools. New software features and an app that lets teachers more easily create assignments round out the package. 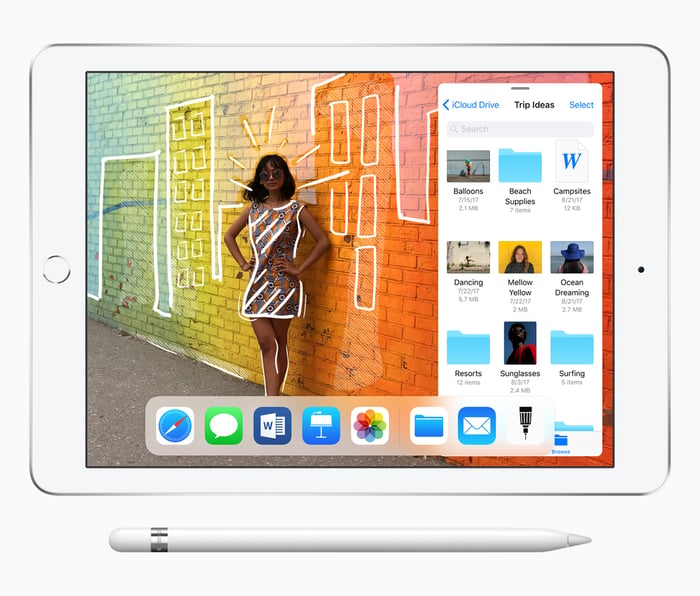 There's a problem with Apple's strategy, though. Given the iPad's competition -- namely, Chromebooks and cheap laptops running Microsoft (MSFT 0.13%) Windows -- Apple's new product is just too expensive to make a dent in Google's education empire.

Not a game changer

While Apple's new iPad features Pencil support, it doesn't come with a Pencil in the box. That will set you back another $99, or $89 for schools. It also doesn't come with any sort of keyboard, which would bring the price up even more. When all is said and done, the total cost will be closer to $450 for schools if both the pencil and a keyboard are needed.

Compare that to the competition. Chromebooks, which run Google's Chrome OS, start at around $179. On the software side, Google offers G Suite for Education, a free suite of software that allows teachers to create classes, distribute assignments, and manage devices. It also includes Google's productivity applications.

Microsoft is also a contender, slightly edging out Apple in the U.S. school mobile device market last year. Windows laptops for education start at $189, with convertible devices with touch screens and stylus support starting at $279. The free version of Microsoft's Office 365 offering for education includes web versions of its Office applications, Microsoft Teams for collaboration, and plenty of other features.

Chrome OS tablets are also in the pipeline. The recently announced Chromebook Tab 10 from Acer is aimed squarely at the education market, priced at $329. For schools already invested in Chromebooks, these tablets may make more sense than the iPad.

Apple's new iPad doesn't really change the picture. It's too expensive to displace Google's Chromebooks or even Microsoft's inexpensive Windows laptops. Apple's bronze medal position in the U.S. education market won't improve much if the company is unwilling to bring the price of its gadgets down.

It doesn't matter all that much

Apple's dependence on the education market is far lower today compared to the past. Gene Munster of Loup Ventures puts it at 10% to 15% of sales. The success of the iPhone over the past decade has relegated education to a minor part of the business.

Still, with estimates for iPhone sales being slashed, education could provide an avenue to offset any decline in iPhone sales. That won't happen if Apple can't produce a cheaper option for schools, though. And given the company's focus on keeping its margins high, I doubt it will take that route.

Apple has lost the education market to Google over the past five years. The company's new iPad appears unlikely to turn that situation around.