As enticing as penny stocks might be with their incredibly "low" share prices that seem to hold the potential for massive gains, all too often they represent dangerous investments that are more likely to result in massive losses than anything else.

So where should you put your hard-earned money to work instead? We asked three top Motley Fool investors for their take. Read on to learn why they think Markel (NYSE:MKL), Charles Schwab (NYSE:SCHW), and Royal Gold (NASDAQ:RGLD) are better buys. 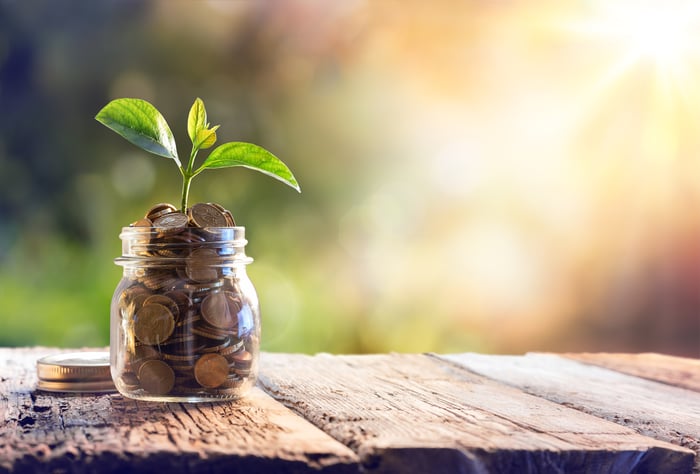 Trust this "mini-Berkshire" instead

Steve Symington (Markel): It's ironic that one of my favorite stocks, Markel, boasts a shares price that sits well above $1,100 as of this writing -- perhaps the farthest you can go from a so-called "penny stock."

But don't let its seemingly high share price fool you; the stock currently trades at roughly 1.7 times book value, a fair premium for such a high-quality business. To be sure, Markel also digresses from penny stocks in that it's an incredibly stable, growing company with three diversified arms of business: Investing, insurance, and Markel Ventures, the last of which is comprised of a varied group of acquired businesses that cover everything from bakery equipment to automotive transport trailers and shrubbery sales.

If this business model sounds familiar, that's because it's the same approach that Warren Buffett used to grow Berkshire Hathaway into the $485 billion multi-industry conglomerate that the world knows and loves today. And that's why Markel -- which boasts a much smaller market capitalization at roughly $16 billion -- is fondly referred to as a "mini-Berkshire" by many of its investors.

For investors willing to buy Markel stock now and hold as it continues its long-term ascent, I think you'll be much happier with the end result.

Jordan Wathen (Charles Schwab): Though it may be better known as a brokerage, Charles Schwab is roughly half bank, half brokerage and wealth manager by revenue, making it a play on rising interest rates, stock prices, and growing wealth.

Charles Schwab is competing aggressively in brokerage and online banking. The company has reduced trading commissions, lowered fees on its line of ETFs and mutual funds, and rolled out highly popular banking services including a fee-free bank account that offers unlimited ATM fee rebates worldwide. These features help bring in new client relationships, which it can later monetize by upselling high margin extras like wealth management services.

Scale is the name of the game. Each new account helps Schwab spread around its fixed operating expenses and deepen its scale advantage. With more than 10.9 million brokerage accounts and 1.2 million bank accounts at the end of February, Schwab is still growing like a weed. In February, active brokerage and bank accounts grew 7% and 9%, respectively, year over year.

Though stock prices may ebb and flow, it's my view that Schwab's value grows in lockstep with each brokerage and bank account its clients open. It isn't the perfect stock -- the ups and downs of the stock market ultimately drive its earnings power -- but I believe that investors who can stomach some volatility will be rewarded with market-beating returns. Ultimately, I think Schwab can capably turn mid-single-digit revenue growth into double-digit earnings growth over the long haul, as widening margins should help it turn more of its revenue into pre-tax profit.

Forget the pennies when you're looking at gold

Reuben Gregg Brewer (Royal Gold Inc.): One place where it's tempting to consider tiny companies is precious metals. Penny stocks in this space often own nothing more than a plot of land that could, someday, be turned into a mine. But because of the upside potential associated with the successful development of a new mine, the risk reward trade-off can look attractive. Don't bother, buy Royal Gold instead.

Royal Gold isn't a miner, it's a streaming company. That means it provides cash up front to miners for the right to buy gold and silver at reduced rates in the future. This leads to wide margins throughout the commodity cycle and consistent enough results in an often volatile industry, where Royal Gold has managed to increase its dividend every year for 17 consecutive years. 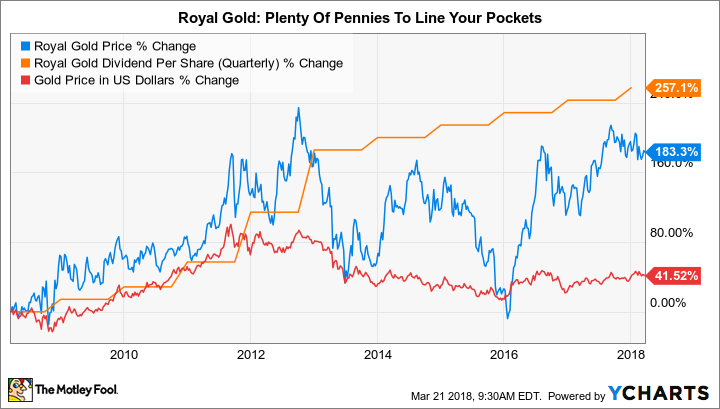 Here's the exciting thing, Royal Gold has investments in 194 different mines! That list includes 39 operating mines, 23 in development, and the rest in some stage of pre-development. In other words, owning Royal Gold provides you with exposure to those plots of land that might turn into gold mines... and a large portfolio of mines that are either already producing or soon to be.

No, you won't get the "boom or bust" rush of owning a single penny stock gold miner. However you will get to collect a modest (1.2% yield), but growing, dividend while you wait for the company's investments to mature -- knowing that there's a plethora of gold mine opportunities tucked into the broadly diversified portfolio.