It's likely you know the story of Apple's (NASDAQ:AAPL) former CEO Steve Jobs. To quickly recap: Jobs was unceremoniously pushed out of Apple, the company he founded, and then led Pixar to movie success and a Disney acquisition during his exodus (Jobs was once Disney's largest shareholder) before eventually rejoining Apple to lead its turnaround.

What fewer people know are the circumstances that precipitated Jobs' return to Apple. Jobs was not directly rehired by the company, instead coming aboard as part of the $429 million acquisition of NeXT Computer, the company Jobs founded upon leaving Apple. Tim Cook's latest efforts hark back to Jobs' NeXT Computer by focusing on that company's target market: education. 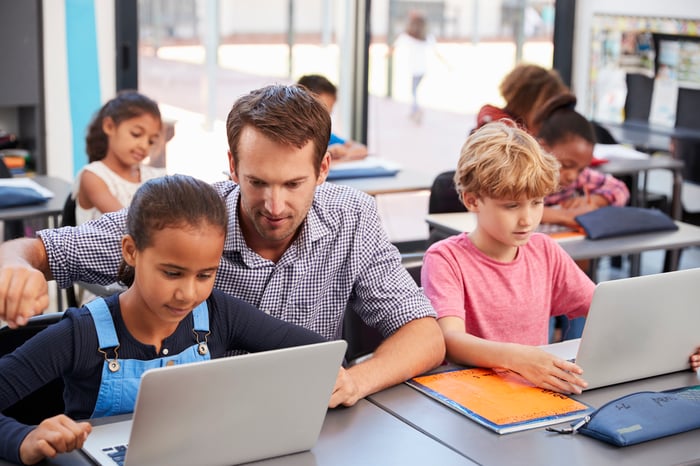 Apple pivots (back) to education with its iPad

According to a report from Bloomberg, Apple plans to focus on education during its next product event. Apple's pivot to the educational market is a two-pronged approach. On the hardware side, the company is looking to better compete on cost by bringing a lower-cost iPad to market. And it has a new emphasis on content and software, announcing new classroom-focused programs during the event.

In recent years, Apple's educational focus could best be described as hit-or-miss. On the content side, Apple's iTunes U has been praised for its huge collection of free courses from prestigious providers, including the likes of Yale, Stanford, and MIT. The hardware side has been less successful. After announcing a push into digital textbooks in 2012 to much fanfare, Apple's iPads haven't been the educational game-changer many have envisioned.

A notable low point in Apple's educational plans was its deal with the Los Angeles Unified School District (LAUSD) -- a $1.3 billion contract to provide every student with an iPad to be paired with curriculum from Pearson Education. The experiment ended bitterly with both Apple and Pearson refunding the school district a portion of the money spent.

Apple's focus on education has waned in recent years

Under Jobs, the educational market was considered a high priority. Not only did he focus on the college market early in Apple's history -- taking on then computing-giant IBM with its Apple University Consortium program  -- but he also founded NeXT to focus on college and the broader education community.

More recently, Apple has notably pivoted away from the market, as higher-margin iPhones have allowed the company to push past a $900 billion market capitalization. According to Futuresource Consulting, Apple has a 17% market share of mobile computing in education versus 60% for Alphabet's Chromebook and 22% for Microsoft's Windows.

With an estimated cumulative spend of approximately $18 billion annually, the educational market is large enough to matter, yet not large enough for Apple to not to obsess over. However, the best reason for winning in this market is to establish a long-tailed relationship in the school-aged and college demographics -- as operating systems tend to be sticky, since keystrokes, commands, and cloud storage form a sort of lock-in effect.

Forget hardware; the real opportunity is software and content

The simple reason for Apple's smaller market share is cost. For cash-strapped school districts and parents of school-aged children, it's difficult to justify paying a premium for Apple's products, particularly for children. Apple's iPad price cut will be a welcome development, but it's unlikely to make the product competitive with Chromebooks or Windows-based tablets on a pure price basis.

However, Apple can succeed where it failed in the past by providing value through software and lowering the cost of educational content. While many mistakes were made with Apple's LAUSD deal, one of its biggest was the partnership with Pearson Education, which allowed it to provide the software and curriculum.

Apple has a big opportunity to lower the cost of schoolbooks and educational material if done correctly. While a cheaper iPad will most likely receive the bulk of the headlines, look to software to gauge Apple's future success in education.