With five decades of burger-slinging experience behind it, Sonic (NASDAQ:SONC) enjoys an unsually strong position in the drive-in restaurant niche. It's a brutally competitive segment of the fast food industry, though, and that means the chain must constantly innovate with its menu, marketing, and pricing in order to keep revenue chugging higher.

Heading into its fiscal second-quarter earnings report, investors were looking for Sonic to announce modest sales growth and improving margins thanks to a shift toward its fully franchised operating model. The company fared well on that profit target but came up well short with respect to revenue gains.

Here's how the headline results stacked up against the prior year period:

Sales growth decelerated from the prior quarter to fall just short of management's guidance. The slowdown implied minor market share losses as rivals ramped up their promotions and as the overall industry slowed. 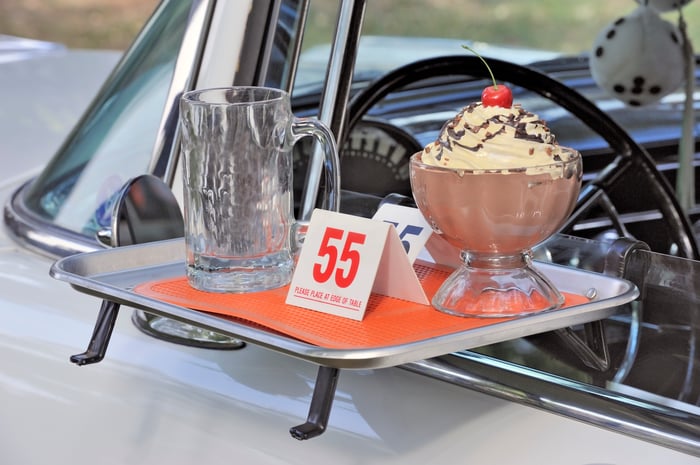 Highlights of the period included:

While blaming "unfavorable weather and continued aggressive discounting by the competition" for the comps decline, executives said they were optimistic about their latest growth initiatives. "We continued to support a simplified everyday value message via the Drive-In Duo in December and January," CEO Cliff Hudson said in a press release.

"These types of broadly appealing value offerings," he continued, "provide a compelling price point and highlight Sonic's quality differentiation." Management also expressed confidence about a stepped-up marketing plan, both online and on television, that should support popular new product introductions like its Signature Slinger and Pretzel Twist.

Yet Sonic still lowered key aspects of its 2018 operating outlook. Rather than projecting comps growth of between 1% and 2%, that core metric is now expected to be roughly flat this year. Operating margin should come in between 15% and 15.5%, or a bit worse than the 15.1% to 15.7% range executives issued in early January. Finally, the company now plans to open between 55 and 65 new drive-ins this year rather than the 70 to 80 it had initially targeted.

Its comps downgrade fits with management's explanation that winter weather led to a small slowdown in the industry over the past few months. Its reduced expansion plans, meanwhile, suggest that Sonic expects these challenging sales conditions to continue pinching results and likely lead to a second straight year of lower comps and reduced profitability.