The stock market had an up-and-down day on Tuesday, with most major market benchmarks losing ground in the morning only to rebound later in the session. Early concerns about trade seemed to weigh on market sentiment, but positive news on the economic front, plus advances for some leading technology companies helped get stocks moving back in the right direction. Moreover, some company-specific news from key players across multiple sectors also lifted investors' spirits. Sonic (NASDAQ:SONC), Integrated Device Technology (NASDAQ:IDTI), and Casey's General Store (NASDAQ:CASY) were among the best performers on the day. Below, we'll look more closely at these companies to tell you why their stocks did so well.

Sonic gained more than 8% after the drive-in restaurant specialist announced preliminary fiscal fourth-quarter financial results. The company reported same-store sales gains of 2.6% for the quarter, with roughly equal contributions from both company-owned locations and franchised restaurants. Sonic also said that it believes that adjusted earnings will be between $0.51 and $0.52 per share for the quarter, which was better than many investors were expecting to see. CEO Cliff Hudson attributed the gains to "Sonic's enhanced marketing reach, refreshed advertising creative, strong new product contribution and relevant everyday value," and investors seem to agree that the restaurant chain looks like it's finally moving ahead after a tough period. 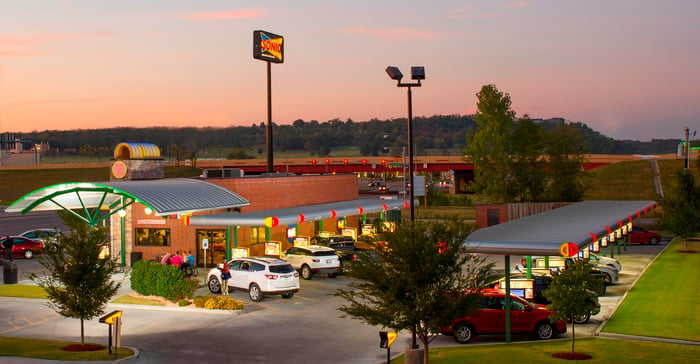 Integrated Device Technology gets an offer it can't refuse

Integrated Device Technology climbed almost 11% after it received a buyout bid. Japan's Renesas will acquire the analog mixed-signal technology company in a deal worth $6.7 billion, with shareholders receiving $49 per share in cash for every Integrated share they own. Integrated CEO Gregory Waters said that the combination with Renesas should create "a new global powerhouse" with "the key capabilities that customers in the modern data economy demand," but with shares trading almost 5% below the buyout price, the market sees at least some risk that the deal might not go through.

Finally, Casey's General Store rose almost 7%. The convenience-store chain reported fiscal first-quarter revenue growth of almost 24%, with same-store sales gains of 0.5% in gasoline gallons sold, 3.2% in grocery and other merchandise, and 1.7% in prepared food and fountain drink sales. Controlled cost growth helped to produce a 24% boost to Casey's bottom line as well, and CEO Terry Handley celebrated efforts to price products more effectively and expand its store network as big contributors to the gains. The company has been suffering through some tough times recently, so the good news was quite welcome for Casey's shareholders, who now appear more optimistic about the chain's prospects.